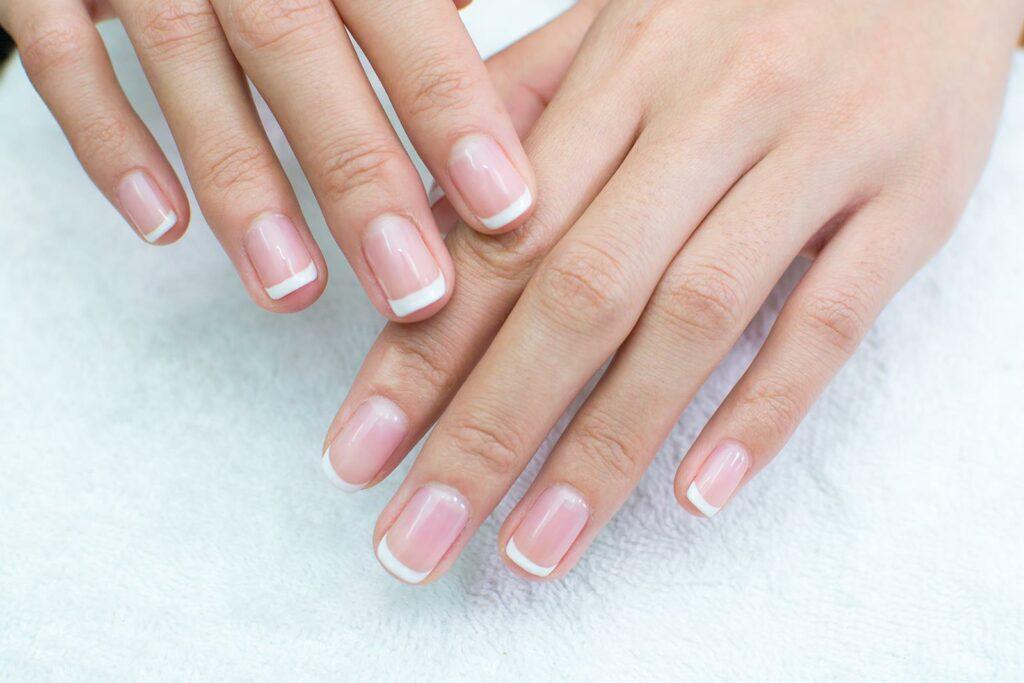 1 Myth: Eating gelatin will strengthen weak nails. While it’s true that nails are made of a protein called keratin and that gelatin too is a protein, there’s never been any scientific proof that gelatin does anything to strengthen nails. By the same token, despite the fact that there are trace amounts of calcium in the nail, downing more milk or other calcium-rich products won’t do anything to strengthen nails either. Overall good nutrition, including adequate protein, is the way to go for strong nails.

2 Myth: Enhancements should be soaked off every so often to “give nails a break”. As long as your nail tech is using high-quality products and correctly applying them, there’s no reason to remove your enhancements. In fact, this should be avoided, as removing artificial nails can be potentially damaging. Ask your tech how to properly maintain your enhancements between visits, so you don’t get any cracks or other signs of service breakdown. If you decide to take a break from polish or enhancements (which can be removed safely if need be), try a month of regular buffing and applying cuticle oil to add moisture and seal the nail.

3 Myth: Avoid nail products that have chemicals in them. This would be literally impossible to do, because virtually everything you see and touch is a chemical (even purified water). There is no such thing as a “chemical-free” nail product (or as an “all-natural” artificial nail product). That said, improperly used chemicals can cause harm, so seek to understand the ingredients in the products your nail tech is using, but don’t avoid them altogether.

5 Myth: Store nail polish in the fridge to make it last longer. If you constantly remove the polish from the fridge, use it, and put it back, it makes no difference to the polish’s shelf life. However, it is true that if you leave polish in the fridge for at least a few weeks at a time it will slow the over-thickening of the polish’s thickening agents, thereby making it last longer. (Just make sure you bring the polish back to room temperature before opening, or water condensation will affect its quality.) The best way to increase the shelf life of polish is to make sure it’s resealed properly after use to prevent the solvents from evaporating — this means closing it tightly as soon as you’re done using it, making sure all polish is removed from the bottle’s neck, and tightly sealing the cap.

6 Myth: That green stuff on some people’s nails is mold. Mold is not a normal nail pathogen. It very rarely can appear on nails, but it will appear brown or black, not green. The vast majority of nail infections are actually caused by bacteria, including pseudomonas, which show up as green discoloration of the nail. It’s illegal for your nail tech to make a diagnosis of what’s causing the discoloration (and she must refuse to service you — at least until you bring her a doctor’s note), but she may be able to recommend a doctor for you to get the greenie checked out.

7 Myth: Plunging wet nails into ice water will make them dry faster. Your nail tech doesn’t do this for you in the salon because it wouldn’t work. To get polish to dry requires the evaporation of solvents. This is why your tech puts you in front of a warm fan.

8 Myth: Never file back and-forth on a natural nail. Filing back and forth won’t harm the natural nail plate if the proper abrasives and the correct downward pressure are used, meaning a 180-grit or higher file and a light touch. Don’t use a file with a grit below 180 on your natural nail because it can cause excessive damage no matter what type of filing motion is used.

9 Myth: Cutting cuticles is good for nail health. What you’re calling “cuticle” is actually the “eponychium” (cuticle is the dead skin that’s on the nail plate, whereas the eponychium is living skin). Cutting eponychium isn’t recommended, and is actually illegal in some states, because too often the living skin that protects the matrix is cut and infections occur. Plus, over time cutting eponychium can lead to thickened scar-like tissue. Instead, soak your nails in warm water for 10 minutes and push back with something soft (like a towel) or just use a liquid cuticle remover to dissolve the dead skin on top of the nail.

10 Myth: I should bring my own implements to a salon to keep myself from contracting an infection. Let’s face it, the environment in your purse (where you’re probably storing your nail implements) is much less sanitary than the environment of a nail salon that complies with your state’s rules and regulations for salon sanitation. Instead of bringing your own implements (which your nail tech would be required to disinfect herself before using, wasting your valuable time), ask the tech questions about her sanitation practices and if she’s compliant with all state board requirements. If you feel uncomfortable about the salon’s cleanliness, then leave without getting a service.