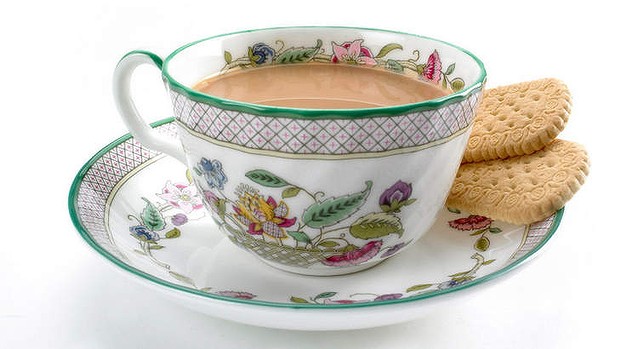 It is important to live a civilized life especially in uncivilized times.  It is a way to cope with a world spinning out of control.  It is how we hope to contain it. While the last fifty years have brought us much advancement, unfortunately, the basics, the things that help anchor us to life, have been disappearing.  When these little niceties are forgotten, we stop being nice to each other and to ourselves. We are losing our civility, grace, and class.

Tea taking is a civilized event. That is part of its growing appeal in America.  I think we are yearning for permission to be polite and kind, soft-spoken, and attentive.  It can be a form of modern, mass therapy where we learn once again that little things do make a difference.

I love watching old black and white movies.  Not only do people look fabulous and elegant, but even their casual banter and the simple street scenes of their day, point to a gentler world we no longer inhabit.  What happened to us?  In our quest for more freedom and less restraint, we’ve swung the pendulum all the way over to a free-for-all where no one feels safe, and so freedom for all has been marginalized.  We have created a place that is difficult to live in.

In Freudian lingo, we have no more taboo, and so the id has nothing holding it back. People say and do whatever they want as if that were the goal of life.  Restraint is frowned upon, and so outrageous and damaging things are allowed to happen.  This begins with the little things.  People not saying please or thank you has led to people verbally assaulting each other in movie theatres and restaurants.  Running a red light has given way to chasing cars who cut others off on the highway.  Dressing down means hardly dressing at all, and people saunter into theatres and opera houses in tee shirts and shorts.

When people come to some kind of unconscious agreement that they can do and have anything they want, when the whole world becomes their living room, they become people who are inappropriate.  And sometimes they are dangerous, because even the slightest request is taken as a threat to their misunderstood notion of freedom.

It really is very simple.  Life is not a casual affair.  It requires a readiness to take care of oneself, and a willingness to make room for others and their opinions. We must learn to respect ourselves and those we share the world with, and we do that by practicing good mental hygiene. If we neglect our physical hygiene, no one will want to be around us, and bad mental hygiene has the same effect.

We need to take time to sit down and settle down, calm and center ourselves, so that we know how to act like the people we want to be.  I think most of us would be horrified to see ourselves on videotape, plowing through our lives, in thoughtless and selfish ways.  The niceties of the past were like pauses in a conversation, they caused us to stop and remember that we do not live here alone.

Every day I see people who are searching their souls and minds and hearts looking for ways to bear an increasingly unbearable world.  Sometimes they speak about a desire to travel to the last elegant oases of peace and civilization still left in the world. But we can create a civilized oasis of our own wherever we are.

When I was young and lived in Greenwich Village, I learned this from my friend, Sofia, the unofficial Queen Mum of our apartment building.  She had lived in her fifth floor walkup for over sixty years.  When we began our friendship, she was already retired and living, as she put it, “on the courtesy of the Bank of Nova Scotia” where she had worked all of her adult life.  Sofie thought it was fabulous to have a pension, and to be able to afford her lifestyle, which was far from extravagant by most people’s standards, but supplied her needs and desires.  She was all-alone in the world, not any living relative, so being self-supporting was essential.

Sofie was a wonderful friend, thoughtful, generous, funny, and loving, but she was never better than at teatime.  She would organize her unmatched antique teacups differently each time, and would take great care as to who would sit where. There would be very strong English or Irish Breakfast tea and she preferred cream to milk. She would also bake a cheesecake or buy something else equally off the cholesterol charts.  But it was Sofie’s stories that made teatime with her truly magical.  The world of the ‘30’s and 40’s would come alive when Sofie served tea.  Sometimes the photo albums would appear to enhance a story she was telling.  It wasn’t just the stories and the photos – it was the way she laughed, and delicately passed you a cup of tea, and became the girl she once was, and still remained, hidden inside the support hose and the sensible shoes of an eighty-five year old woman. You were transported by the scent of Caron’s Bellodgia that she always wore, to a time in our country when there were ladies with handkerchiefs, and men who tipped their hats.

I think in all my years as a therapist, I have never met anyone as well adjusted as Sofia.  Most of us, with so little in the way of familial support systems, would find the time alone overwhelming. And it wasn’t that she didn’t get lonely, but when you were with her she was not going to complain, or bemoan her lonely hours, but instead take full advantage of the moments you were presently spending with her. She kept up with her rituals, her manners, her good taste, her hat and her gloves, because it reminded her to keep herself in check, to be responsible for herself, and her actions toward others. She carried the best of her past with her, the civility, the kindness, the niceties.  I believe Sofie held it together so well because she understood that it was up to her to create a world she wanted to live in.

When the whole world, to use a phrase from Sofie’s time, seems to be going to hell in a handbasket, it is up to you to stand your ground and insist on your oasis of sanity and civility. Cup in hand, you will be strengthened and secured by tea and the time and the thoughtfulness it takes.