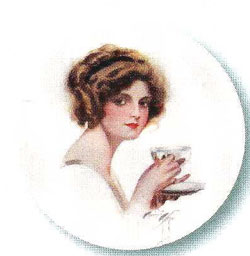 “Women are like teabags- they don’t know how strong they are until they get into hot water.” Eleanor Roosevelt

We are at a crossroads in our country. Women are being threatened with the loss of certain inalienable rights, most importantly, the right of control over one’s body. The rest of the educated and evolved world looks on with shock as America takes 12 steps backwards in time and herstory.

Despite that right wing party’s attempt to appropriate “tea” for their agenda, tea drinking remains a strong and viable option for women’s thought and communication.  We have earned the right to call tea our own. If you follow the tea route from Asia, where most of the world’s tea has been grown, it has usually been women who picked the leaves. It is the difficult, tedious, rhythmical, manual labor of the poor.  In the East, the leaves they picked created the drink of all people, rich and poor, male and female.  But when the same tea crossed the seas to Europe, it was not accessible to the masses.  Over the centuries, the money that men made from the tea and from the tax on tea, kept it a drink for the wealthy in most western nations.  Ironically, it was mostly privileged women who were drinking the tea in their drawing rooms, salons, and tea rooms, that had been hand-picked by their less fortunate sisters in the third world. It wasn’t until the 1800’s in Great Britain that tea became affordable for the average citizen and eventually became the national beverage.

In the United States, running a tea room was an acceptable business for women in the early part of the 20th century and they were gathering places for suffragettes and artists.  As tea drinking becomes more popular in our country today, women are reviving the practice of drinking tea together to discuss the things that must be said.
People often ask me for the psychological explanation of this backlash against women. I refer them to my academic writings on this subject but I also try to offer a simplistic yet truthful explanation.  Women have been gaining power and stature in our country despite efforts to keep women down in salary and position.  American men, on the other hand, have been losing power and stature because their beloved institutions of business and war are not doing well.  America’s image in the world has suffered and we are no longer seen as this powerful, wealthy nation that all the world emulated.  Women are the scapegoats for these ills and ego blows. Since the beginning of humankind, women have been blamed for bad crops, bad weather, and that bad apple.

Simultaneously, our culture demands that men be supermen and deny their feelings of dependency, vulnerability, and passivity.  When men feel these emotions, they project them onto women. They no longer have them and women become the holders of all that is undesirable. Keeping such a split between men and women is no longer functioning very well and both sides are rebelling against these false constraints.  I think we are seeing the last vestiges of this kind of male defensive behavior but they are putting up a strong and dangerous last stand.  What is most encouraging, however, is the reaction I have been receiving from many of the men who read my work. They tell me that they identify more with the women’s feelings and perspectives, and that they don’t want to be forced into some kind of superman role that they cannot embody, and that they believe that the way men have been running the world clearly isn’t  working,

And that’s the point. Women and men can work together to change the old world patriarchy into a partnership where everyone wins. But only when women can contribute their full share that speaks to why there were these two – different but equal – in the garden in the first place.

Invite your women friends to tea and have real conversations about these issues.  Tea will soothe and inspire.  Working women and stay-at-home Moms are not as different as some would have it. That is just another way to divide us. There are actually very few Moms who can afford to stay home and most don’t stay home forever. Regardless, we must keep choice open for all women and compassionate dialogue among us is essential.  The real enemies for all women are inequality and privilege, when it is accompanied by greed, elitism, and lack of empathy.

And do not forget that the operative word for women is “choice”.  Supporting choice for women in all circumstances does not mean that you have to support the kind of choices other women make – it means you support their right to make a choice. That’s what being American was always about –that we support the rights of others even when it comes to issues and actions we do not agree with.  Americans have lived with this proudly since 1776 – is that moral dilemma suddenly too much for us?

I also urge you to embrace the word  “feminist.” Do not stand on preconceived or media-misconstrued definitions. It simply means that you believe in equality for women in every realm: in politics, business, economics, education, healthcare, in the home, etc., etc., everywhere that men have it by their birthright and biology. Stop giving power to the old propaganda view of a feminist as a man-hating, militant angry woman. If you are a woman and you are not a feminist, who are you and why are you letting other women fight your battles for you?  These are serious times and they require serious women taking serious stands. Pour yourself a serious cup of black tea and woman-up!
When you and your sisters and daughters and mothers and girlfriends have sorted it out, then invite your brothers and husbands and fathers and male friends to tea. Help them to find that being receptive and listening and not having all the answers isn’t just a female state of mind.  Drinking tea together can create the time and the place for that kind of learning and sharing.  Drinking tea can help bridge the spaces between us so that together we can find the ways to rebuild the world.