Say Your Age…Loud and Proud 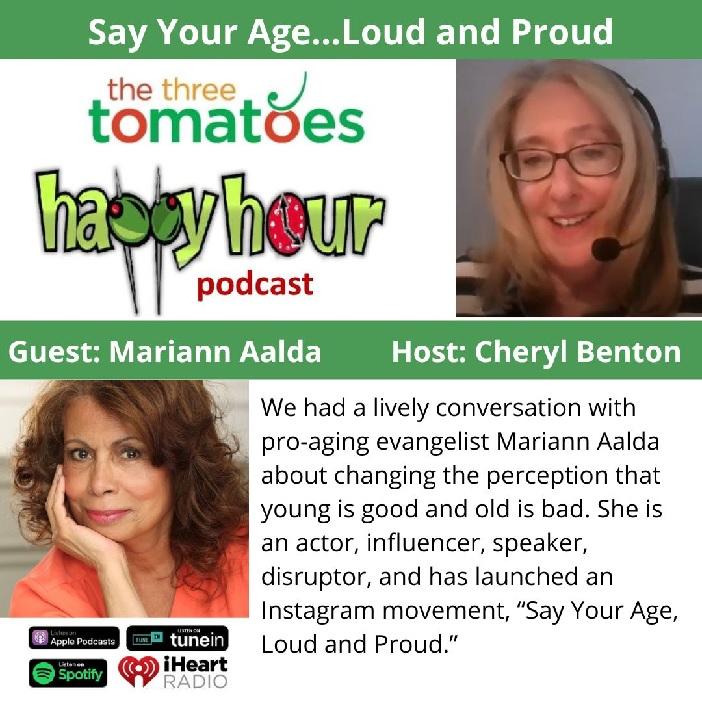 We had a lively conversation with Mariann Aalda, a “pro-aging evangelist,” on this week’s Happy Hour Podcast. Mariann is on a mission to change the perception that young is good and old is bad. She is an actress and a comic, and these days she uses her comedic skills to shine a light on ageism.

Listen in to the Podcast and learn more about Mariann below.

Mariann Aalda was one  of the first African-American daytime soap opera heroines, starring as criminal attorney DiDi Bannister on ABC’s EDGE OF NIGHT.. Today, she’s “prosecuting ageism” with her TEDx Talk, AGEISM IS A BULLY…STAND UP TO IT!; a solo show, GETTIN’ OLD IS A BITCH…BUT I’M GONNA WRESTLE THAT BITCH TO THE GROUND!, and with a newly launched SAY YOUR AGE! initiative on Instagram, for women to take a stand against the stigma and negative stereotyping of getting older.

Additional TV career highlights include starring opposite Redd Foxx and Della Reese as their daughter, Elizabeth, on the CBS sitcom  THE ROYAL FAMILY; recurring as Lita Ford, Anthony’s uppity girlfriend on CBS’ DESIGNING WOMEN,  and co-starring opposite O.J. Simpson as his wife for three seasons on HBO’s FIRST & 10. Most recently she’s starred in the pro-age sitcom pilot, BEN & TONY and the indie short GUMBO for AMC’s  ALLBLK-TV.

Aalda is also a certified hypnotherapist, which is how she became acutely aware of the negative impact of ageism while working with women suffering from midlife depression.

Her popular TEDxTalk is called “Ageism is a bully”, her solo show, “Getting Old is a Bitch,” with performances around the country sells out, and her latest initiative is on Instagram called “Say Your Age, Loud and Proud.” Follow her on https://www.instagram.com/sayyourage_loudandproud/