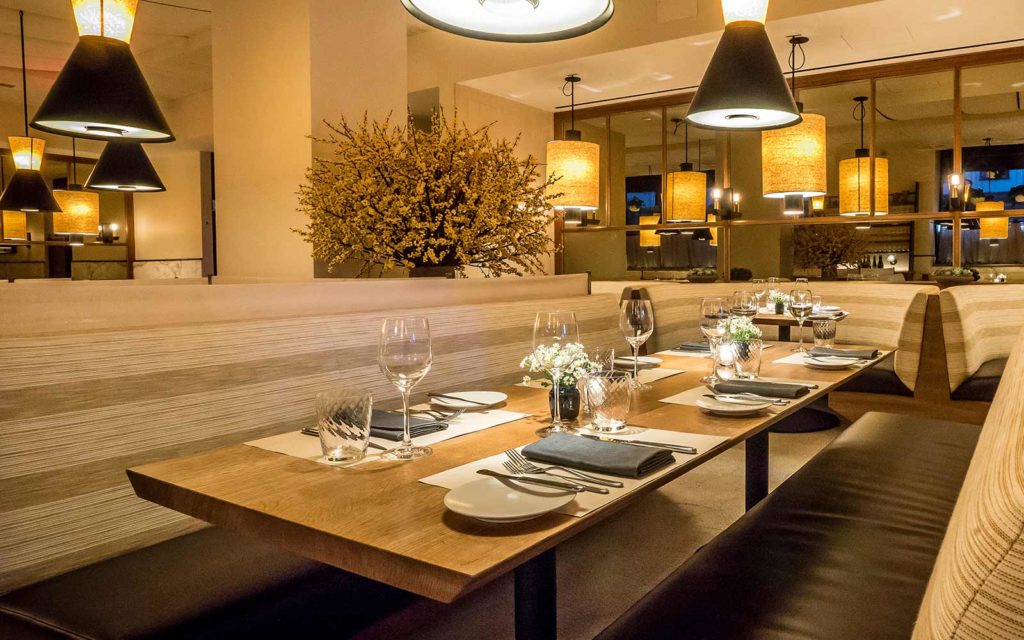 Here’s a first for me: I’m ordering seconds on satiny sunchokes with hazelnut and black trumpet mushrooms because I’ve put away more than my share of the dish’s intoxicating, molten cream. My pals second my bid for seconds. No, I’ve definitely not converted to Michael Pollan globe-saving: “Eat food. Not too much. Mostly plants.” But as chefs are more drawn to fussing around with vegetables, so am I.

Chef Andrew Carmellini and his partners from The Dutch, Lafayette, and Locanda Verde don’t seem to be selling Little Park, their latest gambit in Tribeca’s Smyth Hotel, as vegetable-forward or gently priced, but in fact, it’s both. When my brain settles down to focus on the modest number of choices here, it’s the roots and bulbs and creepers I’m longing to try.

And if you don’t succumb to every new trophy of the farmer’s market and too many expensive cocktails from the Evening Bar – gin with beet powder, scotch with porcini vinegar — you might get out for $65. But if you’re curious like us, seduced by plates in all categories, mostly $13 to $19, and committed to sweets at the end, forget about thrift. 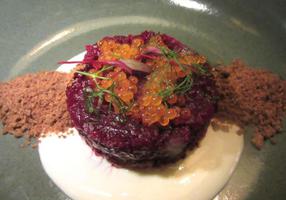 Believe me when I testify that the beet root tartare, blended with horseradish cream and rye crumble, beneath a salty crown of smoked trout roe, is the hit of our first dinner – more thrilling than the whole wheat spaghetti with pork and cabbage. We pile the ruby tartare on “spent grain bread,” parsimoniously “served upon request.” It’s made with the grain leavings of the house’s Greenporter custom made ale. We boldly solicit a refill. Our just-hatched server seems awed by our audacity. It takes a while – are they baking a new batch? 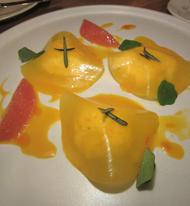 Sheer, almost see-through slices of butternut squash atop burrata with nasturtium leaves strewn about is a voluptuous little bite, more eye candy than sustenance, and the celery root pastrami with pickles is a bit of a hodgepodge. Somehow we’ve overlooked the $18 heirloom carrots with crumb brûlée and black garlic.

We’ve already explored small raw scallops still in the shell, sipped their cider pools and done our usual full swoon over Santa Barbara uni. Given the passion, the waiting, a sample of the ale and too much bread, it seems like we’ve been in this corner forever.

Vegetable posturing — that I found amusing at Narcissa, compelling at Via Carota, irresistible at ABC Kitchen and imperative at Stella– has become impossible to ignore. Nor would I want to — especially here, where Carmellini, who can be rigid and academic about his growing ambition, seems pleasantly relaxed. He’s not committed to being French or Italian or early American. I get the sense he strolled into the kitchen, surveyed the market delivery, and put together dishes that simply please him.

Under fire-roasted meats there are only three items – rose-pink slices of duck breast with a duck sausage and turnip salad, the grass fed hanger with charred broccoli and spatchcock chicken with local green wheat (freekeh, the menu says). In two visits, we’ll taste them all and the $15 spicy shellfish ragu, which is not remarkable.

We’ll pass around the plump little black kale ravioli with squash and pine nuts because there is always someone who has to have kale these days. And we’ll all tuck into the spatchcock chicken set off by a swirl of squash puree, because we still have faith in chicken, and most of my pals can’t even quote Michael Pollan. But the cheese-laced beet risotto is the real triumph.

Jennifer Luk’s splendid winter desserts celebrate citrus and late autumn fruit: the frozen lemon fluff with honey lemon sorbet, a sundae of apple and sweet caramelized beer, the pear and milk chocolate tart. But in two visits, it’s the cinnamon toast ice cream that gets our loudest cheers. Bob, my friend the Grape Nut, finds instant rapport with beverage director Josh Nadel. And on our second visit, the chef himself comes by to say hello. (Keep that in mind if your sea urchin doesn’t come with that much caviar.)

I never found time to get downtown for lunch. The Little Park team does breakfast and room service too. Expect spelt pancakes, fresh pressed kale spinach smoothie with cucumber and green apple, and a celery root cutlet sandwich.

The dining room is small and very beige with big lampshades suspended over most tables. Hanging air plants in the bar say someone at least tried. At an appointed disco hour the lights dim, the music revs up. Someone stands up to leave and bangs his hand on the low-hanging shade. If he’s butch, he’ll pretend it doesn’t hurt. If you’re lucky, your waiter might remind you to duck before you get walloped too.