Lining Up for Root & Bone 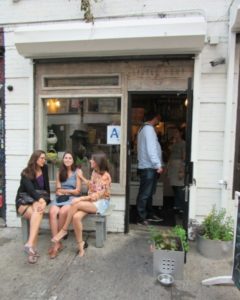 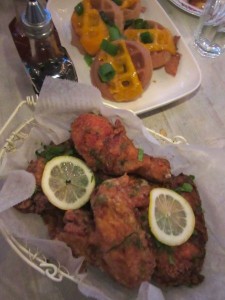 To paraphrase Ms. Liberty: Give me your ambitious, your hungry, your huddled masses yearning for barbeque…send me the brinesters, tempest- tossed, top chef strivers. Along with the homeless and huddled, our town has always welcomed the deliverers of exotic cuisines. Chinese sailors jumping ship and settling on Mott Street, French martinets at the 1939 World’s Fair trapped by World War 2, entrepreneurial Indians with fiery spices, Mamasitas selling tamales from a shopping cart, ambitious escapees from the cotton fields.

Between exploring the food of the Uighurs and the Nawabs and the Vietnamese boat people, New Yorkers are especially keen for the latest in fried chicken. As soon as two veterans from Top Chef and Yardbird in Miami settled their Southern-fried Root & Bone in Alphabet City, my pals began jockeying for seats at the reviewing table.
“But they don’t take reservations,” I protest.

Brandon offers to hit Avenue B and get us a 7:30 table. That suits me. I arrive early. It’s a Monday, but the narrow, elongated chicken shack is bustling. I can imagine coming across it on a rural road in Alabama, or Brooklyn. There are benches outside and standees — young’uns in pinafores and bare midriffs, the cute, barely dressed females that fill hot restaurants these days.
You enter through “The Little Root Market,” a carryout shop, stuffed with pilgrims and negotiators, I see. No sign of Brandon. I’m about to put my name on a list when he swoops around the corner. He’d signed up an hour ago and gone off for a snack, he says. “I just had a bowl of ramen,” he confides, promising that will in no way compromise his appetite. By the time our friends arrive, we’re being summoned, crammed into a corner at a whitewashed wooden table on a slanting floor.

There are brick walls, little air plants, whiskey bottles repurposed as chandeliers and stern, backless stools at the bar, the kitchen counter and the windows. Angels dancing on the head of a pin. Whoever plotted this much seating must have gotten an A in geometry. There’s scarcely room to slither in. In fact, you can’t exit if someone is entering.

Normally I just need a flashlight to read the menu, but here the type is too tiny even with a beam. Tellingly, the drinks listing is twice the size of the supper menu — no problem to read the $12 cocktails, the bourbon roll call and the whiskeys, or the wine list (notice that “garage sale” has $6 glasses and $25 bottles). At the waiter’s urging, we order biscuits and “Drunken” deviled eggs with our drinks.

Annoyed that an order is three half eggs when we are four, we tap a passing waitress to bring us an extra. They’re pink (because chef-partner Janine Booth accidentally dropped one in a bowl of beets while inventing them, I learn later) and pretty (with a root chip twist on top), pretty good too. I’m also content with The Twisted Mustache, a citrus and ginger spiked six-year-old bourbon.

My friends want everything of course. But not all at once. Bussers are trying to fit starters and entrées and share plates unto the table in one swoop. With the shrimp and grits already teetering on the edge, we send the meatloaf back.

I’ve had better biscuits than Grandma Daisy’s, and dipping them in honey-roasted chicken jus strikes me as ghastly. (I think you have to be born to it.) I imagine that chef-owner Jeff McInnis and his partner-girlfriend-chef-de-cuisine, Janine, want to break away from what they did at Yardbird. Here the chicken is brined in sweet tea and rubbed with dried and powdered lemon. It’s juicy and salty and we’re splashing it with Tabasco honey. I’m not recommending the cheddar cheese waffles, offered as an option, although they are a good excuse to try the whiskey maple syrup.

A lush round of fried pimento cheese — the caprese of the peach caprese with grilled peach slices and pickled green tomato — disappears fast. So does the big $8 bowl of elbow macaroni and cheese, although I may have been the chief culprit. I’m into the $10 side of roasted rainbow roots with rainbow chips too (Ok, Mom, I ate my veggies). But there is too much distraction in the shrimp and grits with country ham and Brooklyn Lager jus.

Finally after a binge of serious tasting and some good old-fashioned, unaldulterated over-eating, there’s room on the table for the braised short rib meat loaf. It is just that — pulled beef, edges deliciously caramelized, on parsnip root mash with a tomato ketchup jus and a blackened spring onion on top. Oh, good Lord. We forgot to order the corn — it comes cut in four small pieces, the end cut still wrapped in the husk with popcorn and posole on a swatch of cornbread butter.

I never saw McInnis on Top Chef. But I googled and found him, blue eyed and pretty boy blond. You might not recognize him today, with his grizzled beard. In his baseball cap tonight in the dark, you can’t even see the baby blues as he appears at the table to measure our approval. My friend from Nashville calls him out for the over-worked shrimp and grits. “That’s not what I’m used to,” she says.

That was before I gave him my business card in hopes of reserving a table three nights later. Sorry about that. Of course, I lost my anonymity. McInnis is no ingénue. After summers with two grandmas on Alabama farms and several years in Southern kitchens, he worked in San Francisco and even the Caribbean. With his second bossing the cooks and rolling out fresh biscuits every half hour (they’re better the second night with a little clotted cream stolen from the cornbread), the chef delivers every dish with a preamble of ingredients. By the way, it’s roomier in the back bar room. We order an egg for each of us, at $2 per half. (The bill runs $60 each, $50 on our first visit.)

Nobody wants waffles tonight, and half a bird at just $16 is enough for all of us, the thickly battered breast and thigh, easily shared. I suspect it’s the pulverized lemon that makes it so salty. Again, there’s a lot of interest in the honeyed Tabasco. The short rib meatloaf is a hit and friends who never heard of shrimp and grits like it enough to take the leftovers home.

And now I’m discovering the house triumph — the perfect cooking of the Berkshire bone-in pork chop.

“Do you really want that rare?” McInnis comes by to ask.

“Between rare and medium rare, closer to rare, but not raw,” I say.

He presents it to us whole, provoking a gasp or two — I can imagine similar sounds upon first viewing Dora Maar or a Harley Davidson. I mean glorious. Then he takes it away to slice it for us in the kitchen. (I wonder if he would do the same for anyone or just let you mangle it.)

It could not be more perfect, exactly what I always have in mind, juicy and blushing. There are candied bits of bacon in there too, and a fine version of Brussels sprouts, plus mashed blue potatoes below. A salty sludge of mustardy barbecue sauce almost messes it up. Except it can’t. The pork is just too good.

We’re wild about the rich-as-croesus cheese grits side too. These Trumansburg, New York grits are as good as South Carolina’s,” the chef notes, kind of throwing us a bone. The bowl is topped with cornbread and biscuit crumbs mixed with pimento cheese, cream cheese, pickle and mayo. No wonder there’s none left to take home for breakfast.

Given all this fascination with detail, I wonder why the peaches are so tasteless and not really grilled. And what is this fixation for thyme? Careful, if you drag your biscuits through the benne seeds, you also get a depth charge of salt. I can live without beet sorbet and lemon thyme ice cream too. Minor complaints.

My favorite of pastry chef Crystal Cullison’s desserts is the rustic peach and blackberry tart in a brown sugar and cornmeal crust. But my friends love the mint chocolate chip ice cream cake with a fancy pulled sugar hood ornament on top. The Mississippi Mud cake is very elegant, like French fondante. And I’ve had more baroque carrot cake — this is carrot and parsnip with vanilla cream cheese frosting, but no one else complains. It comes with maple ginger ice cream.