Romancing the Road in Germany

Dreaming about a romantic road trip through Germany? The Romantic Road is an irresistible temptation: 200 meandering miles dotted with castles and half-timbered villages, culminating in the soaring scenery of the Bavarian Alps.

But this is no forest path from the Hansel and Gretel era. The Romantic Road (Romantische Straße) is a route through modern Germany where highway navigation by mobile device has replaced scattered breadcrumbs. And solar panels atop barn roofs is a more common sight than gingerbread houses. While you may encounter the occasional truck or tour bus along the way, you’re unlikely to meet any witches.

Munich is a logical fly-in location for North American visitors to this part of Germany. And the Bavarian capital city is worth exploring — even when it’s not Octoberfest. But Augsburg, not Munich, straddles the Romantic Road and makes a logical starting point to kick off a drive. 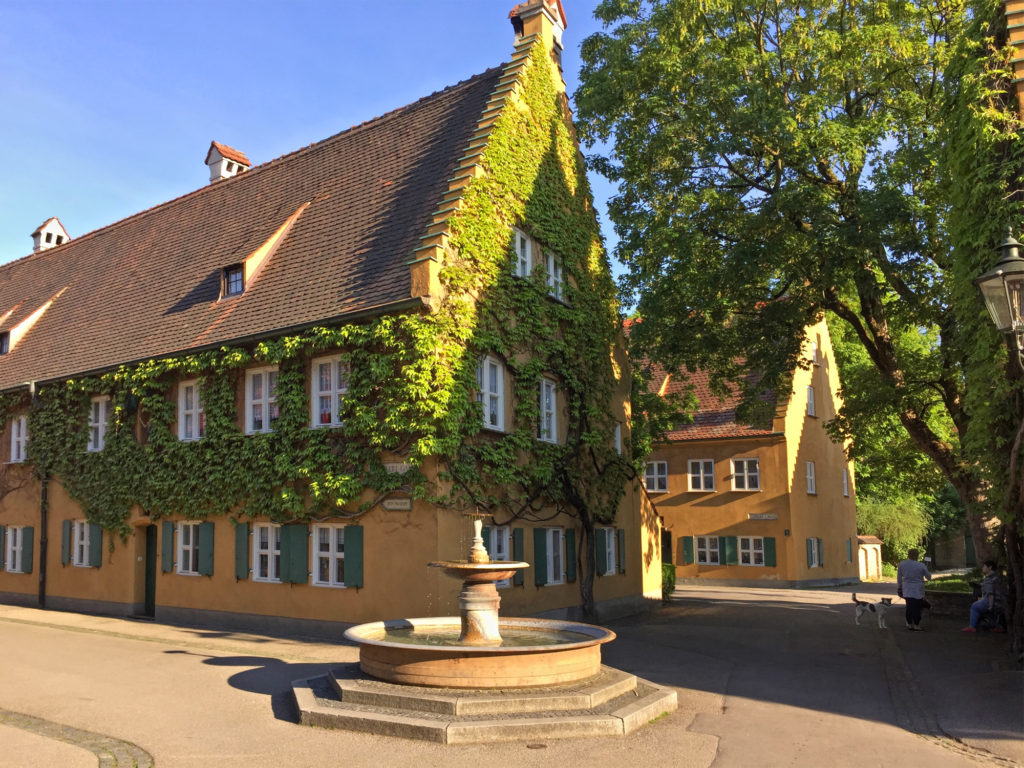 Augsburg is a compact university city about 50 miles west of Munich. Augsburg boasts a rebuilt cathedral, several impressive churches, and an important Jewish cultural museum. The center city is a collection of surviving historical bits, reconstructed buildings, shops and restaurants. Just outside the old city wall near the Rotes Tor (red gate) you can relax in the Kräutergarten —  peaceful gardens bounded by the Stadtgraben, a stream flowing swiftly through one of Augsburg’s original moats.

Augsburg’s most famous hotel is the Steigenberger Hotel Drei Mohren, overlooking Maximilianstraße, the city’s main street. The hotel traces its history back to the 1300s. World War II bombing destroyed the Drei Mohren and much of Augsburg. Today’s hotel is eminently upscale and modern; a counterpoint to the hundreds of pieces of original artwork that survived the war and are now displayed throughout the hotel. 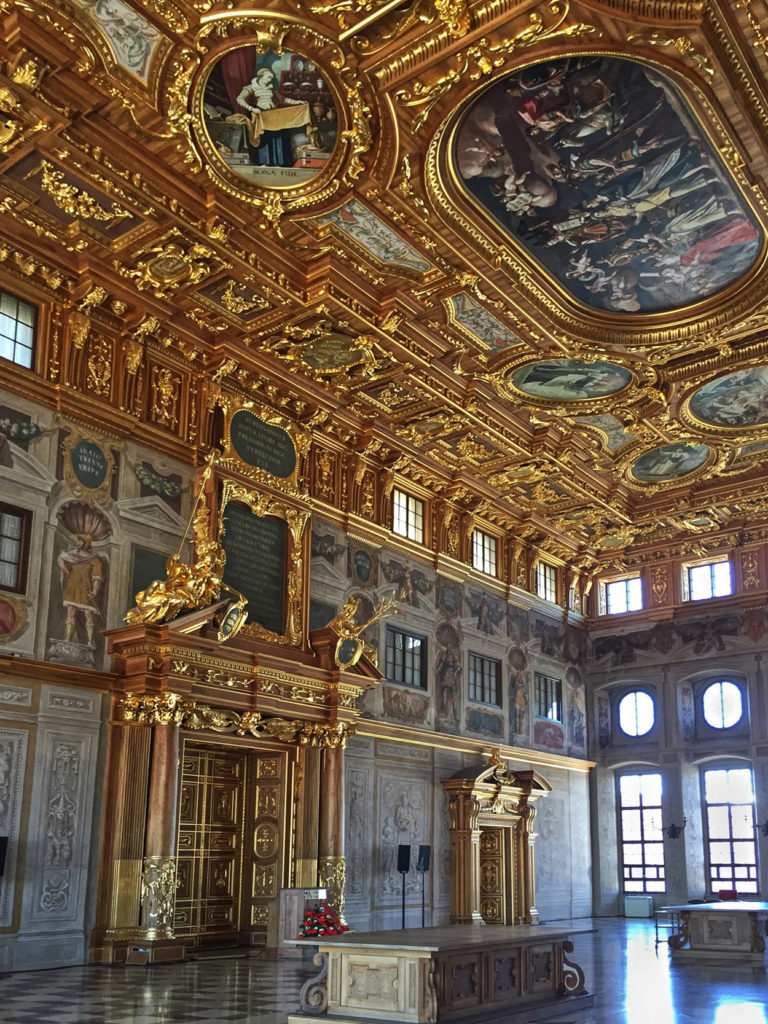 After settling into our hotel room, we walked down the street to the Golden Hall in the Rathaus (city hall). If climbing the stairs up to the hall doesn’t take your breath away, the grand gold-gilded walls, ceilings, and doors of the restored 17th century Golden Hall certainly will.

In contrast, Augsburg is also home to one of the oldest “social housing” projects on the planet. Founded by the uber-rich Fugger family in 1516, this quaint village-within-a-city continues to provide rent-free housing to poor families and individuals. Explore the atmospheric old streets of the Fuggerei, pause for a drink in the pleasant courtyard beer garden, or make a meal of Bavarian tapas at Die Tafeldecker in der Fuggerei.

Augsburg was fascinating. But it was springtime, the local spargel (white asparagus) and strawberries were in season, and the sun was shining. It was time to get out the breadcrumbs. We were off in search of more “romance” along the southern portion of the Romantic Road. Our destination? The fairytale castle of Neuschwanstein.

Signs and modern navigation systems will try to funnel drivers onto decidedly unromantic highways – in this case the B17 road. But if you’re an adventurous driver, look for the side roads that are marked by distinctive brown Romantische Straße signs. The off-the-beaten-path route can be hard to find and follow. But diverting to the side roads gives you a chance to see the farm fields and small towns of the region. No matter how tiny or mundane, every village seems to sport its own tall maypole, decorated in Bavarian blue and white.

In most cases, however, the Romantic Road itself isn’t all that romantic. It’s simply the connector between a series of scenic and historic places in southern Germany. And as you head south from Augsburg, these places are like a handful of pearls strung along the Romantic Road.

Landsberg am Lech is a pleasant, bustling riverside town 25 miles south of Augsburg. We ambled around the wide, shop-lined Hauptplatz with its focal point fountain — the Marienbrunnen. Then we relaxed at an outdoor cafe; our table perched on a bridge overtop the old town’s millrace where it peels off from the fast-flowing River Lech. The rush of water under our feet didn’t quite drown out conversation, but it was just loud enough to add a bit more atmosphere to impossibly-atmospheric Landsberg. 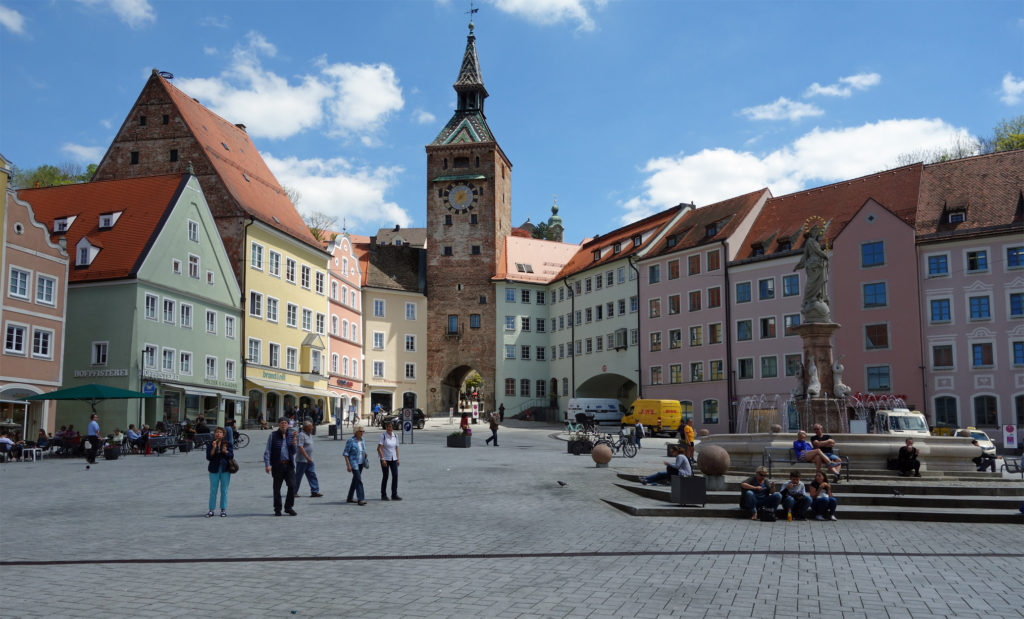 Landsberg’s great beauty has also seen extreme ugliness. Adolph Hitler penned Mein Kampf while imprisoned here, and a concentration camp operated in Landsberg during World War II. After the war, the city was part of the American occupation zone. There’s a small plaque along the riverfront walk commemorating Johnny Cash. In the early 1950s the country legend served at the US Air Force base outside of Landsberg.

Heading south again, the Romantic Road led us to the Wieskirche, also known as the Pilgrimage Church of Wies. This UNESCO World Heritage site rises in splendid isolation on a gentle hilltop commanding a vista south to the Alps. The Rococo interior of the Wieskirche is astoundingly beautiful. During religious events thousands of pilgrims come here, but at other times the Wieskirche is a quiet location. The cows in the surrounding fields hardly take notice of the daily tourists.

Back on the road, the Alps loom ever closer and it’s tempting to pull off and gaze at the mountains in the distance. Do that to your heart’s content, but know that you’ll soon be in those very mountains as you drive to the most romantic spot on the route, Schwangau’s Neuschwanstein Castle.

“Iconic” is too weak a word to describe Neuschwanstein. Add “Disney-esque” and “fairytale” and “fantasy” to the vocabulary list and you still come up short. But whatever words you choose, when you arrive here you’ve reached the pinnacle of romance along Germany’s Romantic Road. 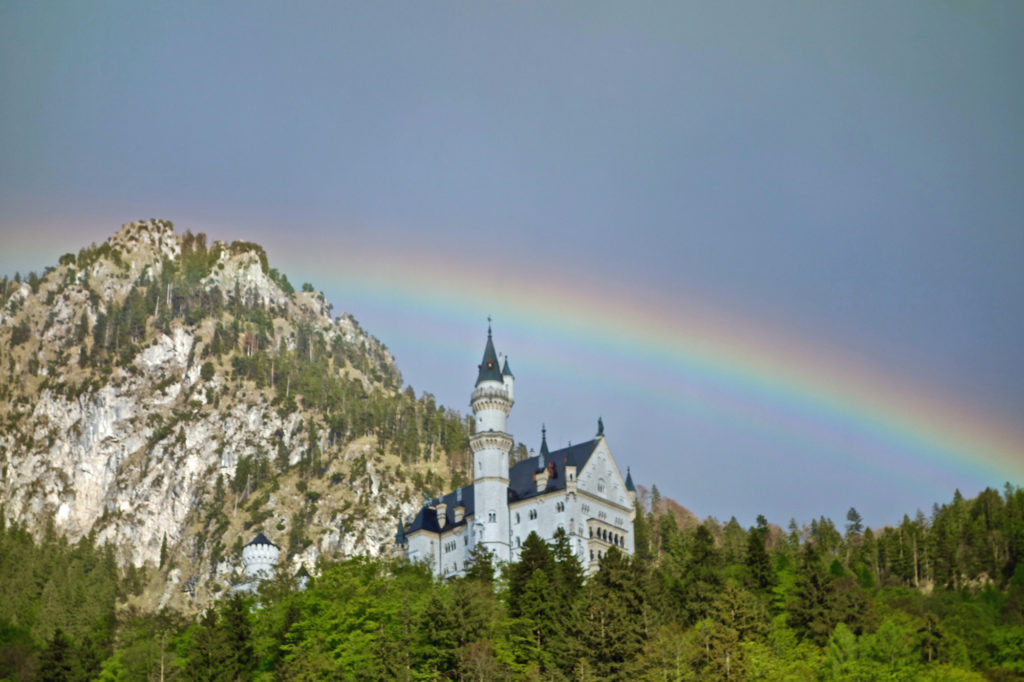 And you won’t arrive alone. Tourists flock to Schwangau to visit Neuschwanstein and adjacent Hohenschwangau Castle. Daytime visitors come by busloads, but in the evenings Schwangau is peaceful. During our visit, the setting sun glazed Neuschwanstein with a dramatic double rainbow, transforming what was already an amazing view into a true fairytale vision.

Schwangau’s Villa Ludwig Hotel boasts top-notch modern rooms and views up the hill to Neuschwanstein. You can enjoy the hotel’s spa facilities…or simply sit on a balcony and gaze at the castle. The nearby town of Füssen is your best bet for evening meals. The town is neat and prosperous. If the tourist gift shops at Schwangau leave you cold, Füssen’s shopping streets are the antidote. And if you need a break from traditional German fare, Il Pescatore is a good Italian restaurant choice.

Füssen is at the end of Germany’s Romantic Road – the Austrian border is less than a mile south. You can drop your rental car and take a train back to Munich. But it seems a shame to stop here at the foot of the soaring Alps.

So we didn’t. For us it was a winding drive through the peaks, on to nearby Oberammergau and more romantic wonders awaiting in southern Germany.