Pasadena Playhouse’s The Fantasticks, a Beautiful Study in Nuance 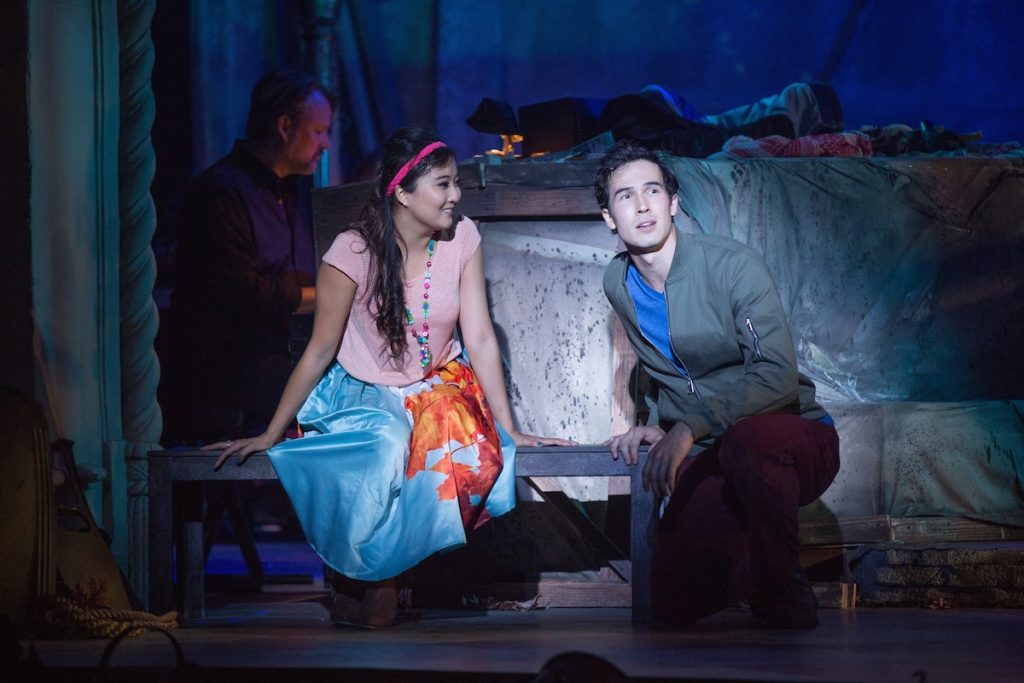 When The Fantasticks first opened Off-Broadway in 1960, it was a pretty sure bet no one had ever written the word Bengasi [Benghazi] in a musical theatre song lyric before. But at the time, lyricist Tom Jones knew it would evoke the romantic fascination of an exotic land in composer Harvey Schmidt’s whirlwind number “Round and Round.” The song is a thrilling but sobering adventure for the musical’s two innocent young lovers, Matt (Conor Guzmán) and Luisa (Ashley Park), who witness firsthand the violent reality of a world spinning out of control. Still, the song was written long before war broke out in the Middle East and the Twin Towers came down in New York. Yesterday’s allure gives way to today’s terror and another layer of evolution digs in. Director Seema Sueko taps into the times by setting her Pasadena Playhouse revival of The Fantasticks in a dingy, decaying theater, much like you might find in a bombed-out city. There, actors and musicians creep in and set about the business of presenting their play. Everything they need is created out of objects found amid the junk on scenic designer David F. Weiner’s wondrously musty stage. Droplets of water plink down as sirens and outside disturbances flash intermittently in Joe Huppert’s exquisite sound design. The whole opening sets up a love of the theatre and a need to create no matter what the limitations may be. It made me wonder what kind of world this might be without that love.

Then, with a deep breath from El Gallo (Philip Anthony-Rodriguez), the orchestra begins to play one of the best overtures ever written and a story unfolds. If it’s been years since you’ve seen this musical or if you’ve never seen it before, this is the one production you’ll want to add to your calendar. Pasadena Playhouse’s revival is a beautiful study in nuance and understanding. Funny, haunting, poignant and bittersweet, it is that rare musical theatre experience that exceeds every possible expectation and leaves you wanting more. 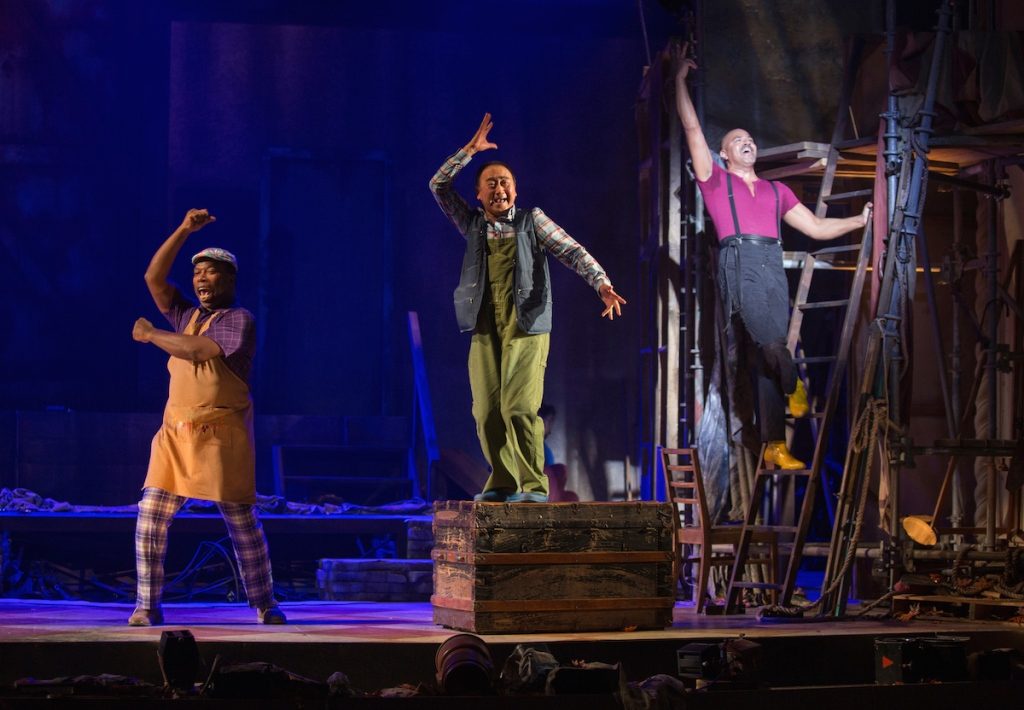 For my money, the score to The Fantasticks is one of the most brilliant marriages between music and lyrics to be found in a classic musical. The themes in its gorgeous songs return in underscoring throughout the piece whenever romance, danger, longing, or any one of a myriad of significant emotions is within grasp. El Gallo invites the audience to see the play with your ears and though he is speaking about painting the picture of a scene, you can also hear the story in its music. There is so much to take in musically.

The chosen orchestration for this revival is piano and harp played by David O. and Liesl Erman, respectively, who create an infinitely rich musical journey. The delicate pianissimo phrases in “Metaphor” are breathtaking and “They Were You” begins as softly as a caress before building to a lush duet and then circling back from whence it came. Both accompaniment and vocals contain gorgeous phrasing. There is poetry in the sound of Ashley Park’s voice and wonder in Conor Guzmán’s.

Sexy innuendo gives way to a driving accelerando in “I Can See It” as music director David O.’s virtuosic piano performance explodes with unrelenting energy underneath Guzmán and Rodriguez’s long legato vocal phrases until the number turns into a three-way tour de force performance. The harp, as moonlight, beckons both lovers and audience into the forest in a beautiful make believe castle scene for “Soon It’s Gonna Rain,” (Guzmán’s exuberant charm bursts from every pore) and although Park sings the phrase “happy ending,” Schmidt’s minor melody foreshadows the pain to come.

The score is full of texture and when a director and ensemble can reveal the many twists and turns within the musical with such tenderness and honesty, you want to be there to be moved right along with them. There is no doubt; this production of The Fantasticks is a triumph for the Playhouse’s artistic director, Sheldon Epps, as he begins his final season leading the charge.

For humor and a nod to the sweet comedy of a much more innocent time, Gedde Watanabe and Regi Davis (Hucklebee and Bellomy) make great use of their vegetables, fake feud, and wall in scene and song – wall provided by Alyse Rockett as The Mute, a story facilitator and location scout responsible for several lovely moments of stage magic.

The ease of Shirley Pierson’s costumes assist with character recognition – plaid for the comics, the mute’s utilitarian streetwear, a whimsical splash of “clear blue sky” and blossoming flowers in the ingénue’s skirt, long underwear as a blank canvas for the actors and a tattered doublet for the Elizabethan.

When the audience least expects it, a secret weapon emerges from a nondescript trunk in the form of Hal Linden as Henry, an old Shakespearean actor. This is the point in many productions where the energy often flags as actors past their prime milk scenes ad nauseam without payoff or point. But what delight there is in Mr. Linden’s portrayal of a career actor of many years, not as spry or as sharp as he used to be but still in search of a stage on which to perform. Lines like “young rooster looking for the pinch of adventure” and “beyond that road’s an episode waiting to be unzipped” take on new meaning with his yeoman’s insight.

Accompanying him is his sidekick Amir Talai as Mortimer, an actor skilled at dying, committed to traveling the world with Henry wherever the footlights beckon. Thankfully, he no longer plays an Indian chief in the Playhouse’s production – a character holdover from an early Western incarnation of the play which always made me a little uncomfortable. Following that original version, the writers (happily) took the script in a new direction with influence from playwright Edmund Rostand’s Les Romanesques, who would later become known for his more widely recognized classic, Cyrano de Bergerac.

Today The Fantasticks remains the longest running musical in history with productions consistently being performed around the world. But all you need to do is make your way to Pasadena to try to remember that long ago September. The show’s message speaks to audiences of all ages and its staying power confirms what we all know in our hearts. Despite everything, love is always worth it, no matter the cost.