LA Theatre News – What to See in May 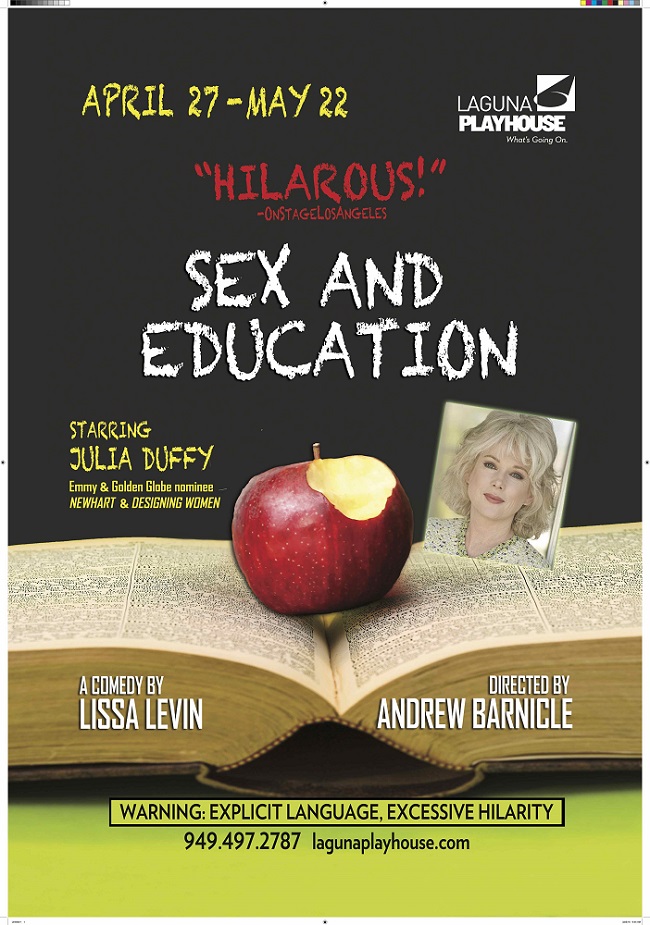 It’s opening night tonight for Julia Duffy who stars in the Lissa Levin comedy Sex and Education at Laguna Playhouse. The Designing Women and Newhart actress is an expert in the funny department and insiders are already raving about her in this hilarious production. It even comes with a warning: Explicit language, excessive hilarity! Duffy plays Miss Edwards, a high school English teacher on her last day of teaching who intercepts a poorly written, sexually-charged note from one of her students to his girlfriend during a final exam. Rather than let it go, she uses it to teach the young basketball star a ballsy lesson about life, love, and the power of words. April 30 – May 22 at the Laguna Playhouse.

In Hollywood, the Montalban Theatre plays host to Corky Hale’s new musical I Only Have Eyes for You, The Life and Lyrics of Al Dubin. The show features songs from The Golden Age of musicals originally introduced by Cab Calloway, Carmen Miranda, Ruby Keeler and Busby Berkeley. It’s an all-singing, all-dancing story of legendary 1930s lyricist Al Dubin, who along with composer Harry Warren and visionary film director Busby Berkeley took movie musicals to new heights during the darkest days of the Great Depression. Hale has had a lifelong fascination with Dubin. She is a pianist, vocalist and harpist who began playing with the bands of Harry James, Ray Anthony, and Jerry Gray, and went on to perform with Billie Holiday, Mel Tormé, Peggy Lee, Liberace, Tony Bennett, and Barbra Streisand. She is married to Mike Stoller of the legendary songwriting team of Leiber and Stoller. Tickets are available at www.flavorus.com. May 10 – June 12 at the Montalban Theatre. 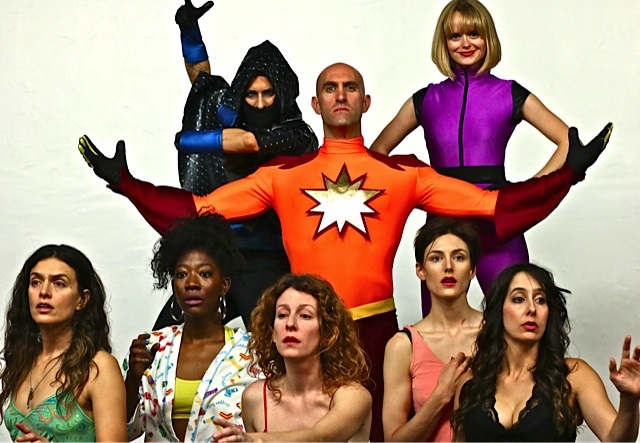 The SuperHero and his Charming Wife. Photo by Daryl Jim Photography

If you’ve ever seen a performance by Not Man Apart – Physical Theatre Ensemble  you know they produce work that is athletic, dynamic, and full of explosive movement. Their latest new play The SuperHero and his Charming Wife is a wonderfully absurd and deeply philosophical hero story set in the world of the graphic novel. It’s the story of a career SuperHero whose marriage collapses when his wife develops the surprising ability to transform into other women. Devoted to security and order, the Hero discovers he is terrified of change and struggles to defend his sense of identity. This modern myth is a Hero’s tale for the pop-culture age full of action, music, and absurd humor, written and directed by associate artistic director Aaron Hendry and choreographed by Michelle Broussard. Performances run through May 15 in the Highways Performance Space at 18th Street Arts Center in Santa Monica.

An all-star cast will perform Eve Ensler’s The Vagina Monologues in an intimate theatrical setting for four benefit performances April 30, May 1, 6 & 7 at 8pm, at the Atwater Village Theatre. Produced and directed by Sheena Metal for Ensemble Studio Theatre Los Angeles, all proceeds will benefit V-Day (vday.org), A Global Movement to End Violence Against Women and Girls, and protect.org, a national pro-child, anti-crime association committed to building a powerful, nonpartisan force for the protection of children from abuse, exploitation and neglect. A different cast will perform each night. Actors include Alison Arngrim, Julie Brown, Gabrielle Carteris, Rae Dawn Chong, Anne DeSalvo, Frances Fisher, Geri Jewell, Carolyn Hennesy, Kate Linder, Lee Meriwether, Susan Olsen, Robin Riker, Beverly Sanders, Tracie Thoms, Kirsten Vangsness, Suzanne Whang, Jill Whelan, and Debra Wilson. To date, the V-Day movement, founded by Ensler, has raised over $75 million and educated millions about the issue of violence against women and the efforts to end it. Get tickets. 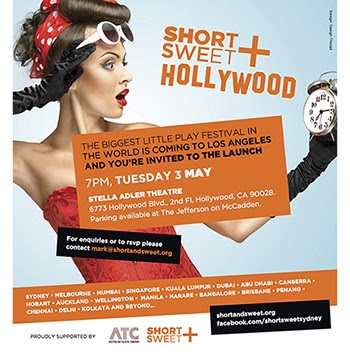 LA Theatre News – What to See in May

Stella Adler Theatre in Hollywood has been selected as the venue for the first ever Short+Sweet festival in the U.S. which is happening in September. Eighty 10-minutes plays will be featured in the festival and, on May 3, the festival will host a networking reception and sampling of performances from the existing repertoire. The Australian powerhouse festival has already made its mark worldwide, with offshoots in the United Arab Emirates, India, Malaysia, New Zealand, Philippines, Singapore and Zimbabwe. Next stop – L.A! The evening begins at 7 pm. Admission is free but you’ll need to RSVP.

Joanne Baron stars in the west coast premiere of Blood From a Stone beginning May 7 at the Electric Lodge in Venice. The play originally ran off-Broadway with Ethan Hawke in the role of Travis. This production features Chad Brannon from General Hospital in the role with Baron playing his mother, Margaret. Before leaving Connecticut to start over on the west coast, Travis attempts to make peace with his troubled family but it isn’t that easy. There is anger and dysfunction everywhere you look. Can you get blood from a stone? Sure. Just throw the stone directly at someone’s face. Yikes! 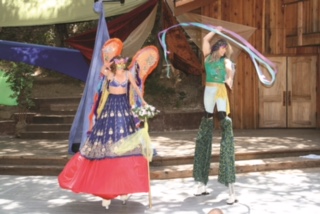 For a fun way to celebrate Mother’s Day, head on over to Topanga Canyon where the 18th annual MOMentum Place curated by Lexi Pearl will create a fantastical world of aerial and circus performers, dancers and musicians in Theatricum Botanicum’s outdoor amphitheater. It’s a great way to relax and enjoy a unique afternoon of family-friendly performance delights. Come for brunch from Noon – 1:30 pm. Performance begins at 2pm. You can get tickets ahead of time or at the door and be sure to dress casually. A day spent outdoors at Theatricum is truly a treat.

Actors Co-op in Hollywood closes out its 2015-16 season with Brian Friel’s 1992 Tony Award-winning play Dancing At Lughnasa directed by Heather Chesley, opening on May 6. Widely regarded as the Irish playwright’s masterpiece, the story follows five unmarried sisters who live in a modest cottage in Donegal. It is narrated by Michael Evans who recounts the summer he spent in his aunts’ home when he was seven years old. The year is 1936 and the family has just acquired its first radio which is about to set in motion a series of unforeseen changes. You might remember that Meryl Streep played the eldest sister in the 1998 film version of the play. Actors Co-op, housed on the campus of the First Presbyterian Church of Hollywood, does lovely work with this kind of material and they’ve got a free, gated parking lot to make parking a no-brainer. 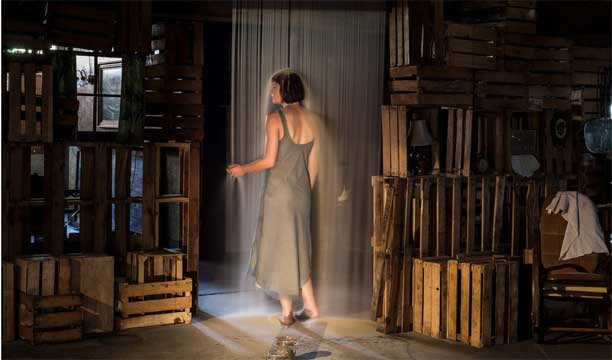 The Day Shall Declare It. Photo by Jonathan Potter

Wilderness brings its immersive site-specific theatre experience The Day Shall Declare It back to the Los Angeles Arts District in a remount that explores our relationship to work. The physical theatre piece weaves together dynamic movement with a collage of American labor literature from Tennessee Williams and Studs Terkel, developed and co-directed by Annie Saunders and Sophie Bortolussi, featuring the original London cast. Performances run May 10 – June 19, six nights a week, with an audience of only thirty people per show. Wear comfortable shoes as it is a largely standing room only experience. They will have a coat and bag check available. This new 2016 version adds The Paradise, an exclusive pop-up bar with live music curated by Vagrant Bartenders. Wilderness is an experimental performance company that brings temporary theatrical experiences to vacant buildings awaiting redevelopment. This production will be staged in an unused 1925 brick shopfront warehouse at 2051 East 7th Street, Los Angeles, CA 90021. You want something fresh and new? This is it.

And finally, get ready to “let it go!” when the new stage musical Frozen – Live at the Hyperion opens May 27 at Disney California Adventure Park . Based on Disney’s animated blockbuster film, audiences will enter the emotional world of Anna and Elsa in an entertaining musical adaptation that includes elaborate costumes and sets, stunning special effects, show-stopping production numbers and many theatrical surprises. Music and lyrics are by the creators of the film score, Kristen Anderson-Lopez (In Transit, Up Here) and Robert Lopez (Avenue Q, The Book of Mormon, Up Here). Master Puppet designer Michael Curry who co-designed the puppets for Julie Taymor’s The Lion King on Broadway will bring Olaf and the Trolls to the stage. And it wouldn’t be Frozen without snow throughout the interior of the theater – on stage and over the audience. As the temperature climbs over the summer, this just may be the best place to play it cool!