Not All Pasta is Created Equal 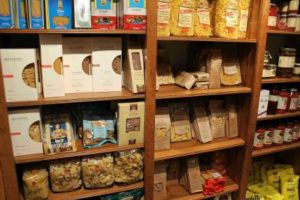 There are dozens of different brands of pasta on the supermarket shelf. But isn’t pasta just water & flour? Aren’t they all basically the same? Are some better than others? Italians will say “Si, si!—YES, there’s a huge difference!” 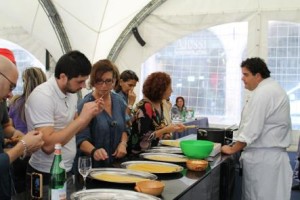 Chefs in Italy squeeze it, pinch it, sniff it all before they serve it. 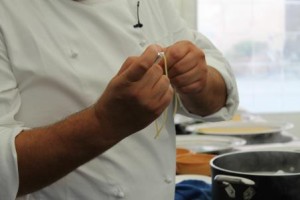 How can we Americans learn to spot the best pasta?

In Italy there’s an expression, “When it comes to pasta, you can fool some people. Even some Italians. But you can’t fool a Neapolitan.” So I traveled to Naples, Italy to eat lots of pasta and find out. I spent a day at one of the areas most renowned pasta companies–Garofalo www.pastagarofalo.it/us/ to learn all I could about pasta-making.

I met with the great team of experts there including Luca de Luca, Gianni Schisa and Flavia Garzia.  Here’s what I learned:

When raw, it should:

3-be uniform in size and shape, with no broken bits

4- break it in half cleanly, without little piecdes falling off here and there

When cooked, it should:

3-absord the sauce & remain firm to the last bite

Interestingly, if the sauce slides off, it’s a sign that the pasta was not properly dried.  The pasta maker likely rushed the drying by using too high a temperature, which causes the pasta’s starch to form a sort of glaze on the pasta, making it shiny and impenetrable for sauces.

Do your very own pasta contest at home!

-2- Once the pasta is al dente, drain, and test its ability to absorb sauce. Put a few strands of each into two different bowls with a little water and after several minutes note which pasta absorbed more water.  That’s means it will better absorb sauce and is the better pasta.

-3- Then pinch both types of pasta between your thumb and index finger. The inferior pasta will be gummy to the touch and soft in the middle, while the better pasta stays al dente.

-4- Finally, taste each pasta plain, with no sauce. That should be enough to convince you!

Once you pick the winner of your pasta contest you can try this terrific recipe from Naples. This sauce is actually a pureed vegetable—healthy and perfect for vegans: 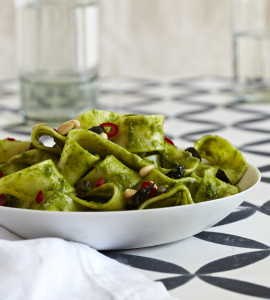 Escarole, with its broad, tender, pale green leaves, makes a gorgeous sauce that gets an added boost from olives, salty capers, tingly chili peppers and crunchy toasted nuts. Nothing is more simple and elegant.

Here it’s tossed with pappardelle, fabulous wide, long noodles, whose name comes from the Italian word pappare, “to gobble up,” but its fabulous with any pasta.

Using a large pot, bring salted water to a boil. Wash and roughly chop the escarole, and blanch in the boiling water for about 2 minutes. Remove with a slotted spoon, reserving the cooking water.

Puree the warm escarole with 3 tablespoons of oil and the garlic in a food processor until very smooth and silky.  Stir in the chili to taste, olives, and capers.

Meanwhile, bring the cooking water back to a boil, add the pappardelle and cook until al dente. Drain and toss with the escarole mixture. Serve topped with pine nuts.