Honey Abuzz with Variety, Plus a recipe for Yogurt Semifreddo with Radicchio Marmalade 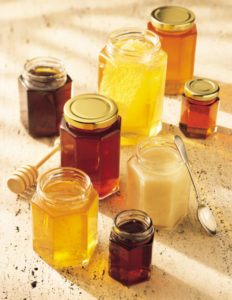 Tupelo, lavender, sourwood, sage, buckwheat, eucalyptus, and Bradford pear are just a sweet drop in the honey pot. There are over 300 distinctive types of honey produced in the United States.

Not many of us realize that which plants bees visit drastically affects the flavor of their honey. If bees hives are placed near a field of Linden tree the honey will have a delightfully light mint taste, which tastes completely different from honey the bees make when they gather nectar from buckwheat blossoms, which tastes of molasses and brown sugar.

Despite this wide range of choices, most of us have only tasted honey blends, not single source varieties. “Companies that supply supermarkets mix honey from many different beekeepers. Supermarket honey is just as good and nutritious as any honey. However, unique and unusual flavors may be lost in the intermingling of many flavors,” explains Troy Fore, Executive Director of the American Beekeeping Federation. “Honey from small beekeepers is more likely to come from a single floral source and will have that source’s flavor. The different flavors are distinctive, and it’s a treat to experience the variety,” continues Fore.

The best way to appreciate the wide range of tastes is to try a honey you’ve never had before! You can approach tasting honey like you would wine, and, just like no two Burgundy wines are the same, there is lots of variety in honey. First look at the honey’s color, which can range from almost clear to deep amber. Second take in the aroma. Does the honey have a floral bouquet, fruit fragrance, or spice scent? Blueberry honey has a lemony aroma; dandelion and tupelo honey smell of summer flowers; clover honey has hints of spicy cinnamon and sourwood honey has a sweet anise aroma. Next, and best, take a tiny taste. Roll the honey in your mouth, letting it softly melt first on the front of your tongue, which has mainly sweet taste buds then toward the sides and back to reach the sour, salty, and bitter taste receptors.

For example, clover honey’s nose (wine experts refer to a wine’s aroma as “nose”) is light, flowery, buttery, with hints of cream and vanilla, while the wild flower honey’s nose is heavy, muscular, peppery, leathery, with tones of wood, moisture, and mushroom.

What’s so great about it is not only its luscious sweetness, but also its thick viscous quality. That’s what makes it such an absolute perfect accompaniment to a cheese plate. The silky smooth texture of honey balanced the graininess of hard cheeses and counters the slight chalkiness of some goat cheeses. Honey is amazing drizzled over thick tart Greek yogurt or served with fruit, or in place of maple syrup, slathered on scones or warm biscuits, or drizzled on waffles, pancakes, oatmeal, or, of course, as the sweet component in a homemade batch of granola.

There are many tantalizing ways to cook with and use honey. Honey is a terrific replacement for granulated sugar in baking. Begin by substituting honey for half of the sugar called for in a recipe. With experimentation you will discover ways to substitute honey for ALL the sugar in a recipe!

While I was working on Dolci: Italy’s Sweets I discovered Italy’s love affair with honey. They feature it in hundreds of desserts. In Sicily they make a cookie with just two ingredients—honey and flour. Sounds weird, but the cookies are incredible, especially if you use a full flavored dark honey. The’re called mustazzoli in Italian, but I loved ‘em so much that in my book I named them Absurdly Addictive Honey Cookies! Another weird, but wonderful, Italian honey dessert is —Yogurt Semifreddo with Radicchio (recipe below). Yes, the veggie! Really popular in the Venice region, which grows so many fabulous types of radicchio lettuces, the slightly tart radicchio and yogurt plays off wonderfully against the honey. 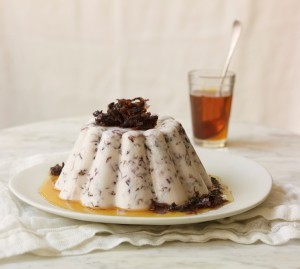 Radicchio is transformed into an exquisite marmalade and added to yogurt to create an exceptionally sophisticated semifreddo.

I’ve remade this recipe, without the radicchio, dozens of times. It’s a terrific basic!   I really love the fact that with just a container of yogurt and some gelatin I can create a quick and healthy dessert.

Substitute other flavor marmalades or make it without marmalade just topped with a drizzle of flavored honey.

For the marmalade: Cut the radicchio in very thin strips, then mince the strips. Bring 1 cup of water to a boil in a saucepan, stir in the radicchio and simmer for 1 minute. Drain the water.

Add the butter and honey, stir to combine, and cook, stirring occasionally, until very soft, at least 30 minutes. Remove from the heat, stir in the lemon zest, liqueur, and grappa, if using. Reserve.

For the semifreddo: Put the gelatin into a bowl and mix with 1 cup of boiling water. Stir until the gelatin dissolves, then mix 7/8 of the reserved radicchio marmalade until well combined, reserving the rest of the marmalade for garnish. Allow the mixture to cool to room temperature, then stir in the yogurt until creamy and well combined.

Divide the mixture between 6 ramekins or in one mold, cover in plastic wrap, and refrigerate until firm, about 3 hours.

To serve, unmold the semifreddo onto a serving plate and drizzle with honey and garnish with the remaining radicchio marmalade.

ALFALFA. Produced from the purple alfalfa blossoms, this light honey has a pleasingly mild flavor and the lovely aroma of beeswax.

BLUEBERRY. Taken from the tiny white flowers of the blueberry bush, the nectar makes a honey that is typically light amber in color with a full, well-rounded fruit flavor and flowery, lemon aroma.

BUCKWHEAT. Dark and full-bodied with an aroma reminiscent of the best single malt Scotch. Buckwheat honey has been found to contain more antioxidant compounds than some lighter honeys.

CLOVER. Has a pleasing, mild taste that depending on the location and type of source clover, varies in color from water white to light amber to amber. Clovers contribute more to honey production in the United States than any other group of plants.

FIREWEED. Light in color and mild in flavor, this honey comes from a perennial herb with pinkish blossoms, fireweed, which grows in the open woodlands.

ORANGE BLOSSOM. Often a combination of citrus sources, this light and mild honey has a fresh scent and light citrus taste.

SAGE. Light in color yet heavy bodied, with a mild but delightful flavor. It is extremely slow to granulate, making it a favorite among honey packers for blending with other honeys to slow down granulation.

TUPELO. Light golden color with a greenish cast and a lovely spices and mint taste. Because of the high fructose content in Tupelo honey, it granulates very slowly.

For more information on honey log onto The National Honey Board’s websites: www.honey.com or www.honeylocator.com