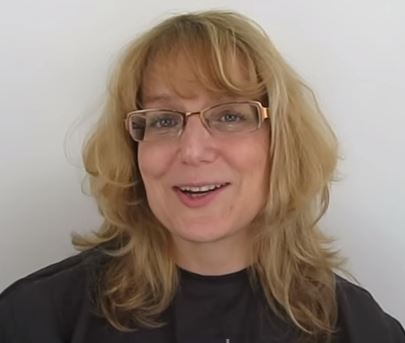 Michelle has been wearing her hair like this since the 1980s. But now that she’s turning 50, she felt it was time to ditch the ‘80s look and get a more updated look. Christopher Hopkins and team created a new hairstyle for her straight fine hair, and a more flattering color too.

There’s a reason Michelle kept returning to the familiar look she discovered in the early 1980’s. It worked for her head shape, hair texture and personal style. She has extremely fine hair that is sparse at the temples and sides and fringe. With a very strong cowlick and split in the bang (fringe) area she ends up cutting them short. Her head is also narrow and quite small proportionately to her shoulders and body. Since it is also very straight everything her hair does naturally exacerbates the challenge of achieving fullness. Kelly Marcinak created a more neutral to ash blonde which was more flattering to an Olive skin complexion. Kami achieved a soft and feminine makeup palette which suits her softer feminine personal style. Christopher  brought the length up to help create more width that would last. As the fringe area grows she will hopefully be able to manipulate the flow to avoid “’80’s bangs.” However, flat is definitely not flattering around her forehead.  Watch the video transformation.