Hamptons in the Lull 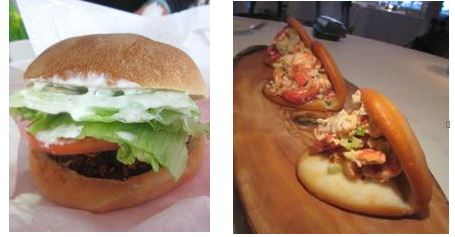 The traffic slowed as the jitney pulled away from the stop across from Bridgehampton Candy Kitchen. I imagined they were the early crowds out to beat the traffic, beating the traffic being a local sport. But in fact, restaurants were nearly empty Tuesday and Wednesday. We got our favorite aisle seats at a 4 o’clock movie on Main Street. Late on a gray Thursday afternoon, we pulled up to the fence at Main Beach in East Hampton. A sole passerby kicked up the sand. Suddenly we saw a deer coming toward us. Yes, a deer. A young deer – it dashed by so quickly I didn’t have time to find my camera. Howard caught it on his. No, the three of us marveled, in our 45 years of coming to the Hamptons, we had never seen a deer on the beach.
******
How I Know I’ve Arrived: It’s Bay Burger for Lunch.
I arrived at the East Hampton bus stop Tuesday in time for lunch with my hosts at Bay Burger on the Sag Harbor Turnpike. It was grey and foggy, and too cold to eat on the porch as we usually do. Bay Burger does fast food as all fast food ought to be. Sandwiches compiled to order on house-made buns. Substitutions permitted. Ice cream home-churned. They even make their own veggie burger (not that I’ve tried one yet). My host’s lobster roll was piled high with properly-cooked chunks in what they describe as “minimal mayo.” On my last winter visit I had a burger with everything plus. I ordered the tater tots and ate most of them myself while my more abstemious pals watched. I like the feeling of escape I get the moment I descend the bus. I like to pretend calories don’t count when you’re out of town. This time I abandoned my usual half-hearted discipline slowly and went with the fried fishwich, asking for a bacon add-on and lettuce instead of spinach. The manager himself delivered our grub. Then I surprised myself by getting a small rum raisin ice cream in a cup. Alas, it had freezer burn. I decided not to complain.  Bay Burger. 1742 Sag Harbor Turnpike. 631 899 3915.
*****
Trailing Cassandra at Tutto Il Giorno — South

Cassandra is the fussiest foodster I know. When she goes into her nothing-shall-be-served-as-the-menu- proposes act at dinner, I want to hide under the table. But I count on her for Hamptons dining guidance. Tutto Il Giorno in South Hampton is what she likes right now. I’ve been to Tutto in Sag Harbor many times and it has always been good or good enough. But on this quiet Tuesday night before the Memorial Day madness could turn the highway into a parking lot, getting there was a breeze. We were the first to arrive, settling into a booth where a collection of stuffed pillows waits for locals so thin they need prop-up.I decided against a cocktail – more and more these days I am shocked to find myself needing a stiff drink, but I try to settle for a glass of red instead. When I’m defying mortality with yet another pork chop, I remind myself that 8 oz. of red wine is actually healthy. The Montepulciano d’Abruzzo with the Tutto label was okay.No point in coming here if you need to pinch pennies – in fact, maybe no point in playing the Hamptons game. Hit New Jersey instead. Tutto’s starters are mostly $18 to $22, pastas mostly $28 and $29, secondi, $33 to $44. We lamented the absence of Long Island wines, as we often do. Fran ordered the only one, a Wolffer Rose. No one wanted the Brussels sprouts salad with dried fruits and mixed nuts, but intrigued by that odd combination, I ordered it anyway. It was brilliant. I’ll be back just for that salad. And for the Mattonato chicken under the brick, a large whole chicken with baby artichokes, slivered potatoes and a boost from preserved lemon. I had asked for it “not over-cooked.” The waitress wrote that down on her order pad. It was full of flavor, juicy, my dream of a chicken. (I took most of it home because it was too good to leave behind.)The fritto misto, a mix of calamari and zucchini strips with an odd basil dip, tasted rewarmed. The eggplant ooze of the barchetta was barely edible. But the tomato-sauce-tossed penne with eggplant and mozzarella was simple enough. And my host’s fire-roasted whole branzino (he asked for it deboned) has a nice burnish from the fire. He was quite happy. I’m not a big fan of Italian cheesecake, but this cheesecake was as American as a girl scout, dense on a crumb crust with rivulets of caramel. We almost finished that off, too.  Tutto Il Giorno. 56 Nugent Street, Southhampton. 631 377 3611*****Tillie’s: Gurney’s Tries AgainWe’d set our appestats for lobster rolls at Lunch on the highway beyond Amagansett, but the place was closed for a movie shoot. Why am I not surprised that this ancient, once innocent roadhouse could go Hollywood? Never mind, we took our readjusted hungers to Gurney’s Resort and Spa where a new feeding plan was just rolling out. Scarpetta Beach (without Scott Conant) was not open yet, but Tillie’s, a long room overlooking the deck and the ocean, was serving “comfort food.”

The manager, Ian, recognized me from our Manhattan life in food, and that may be why the creamy Montauk clam chowder overflowed with sea creatures, potatoes, scattered jalapeno and what tasted like house-made oyster crackers. Will yours be the same? I worry. The Ritz crab cake was first rate too, though not really a crab cake, more a collection of lush crab petals crumbed and sautéed. I didn’t even object that it was served on the dreaded kale because it was so purely crab. I chewed a couple of squiggles of green unchewableness just to confirm my disdain.

Fran was not happy with the orange sauce on her lobster roll. I agreed the big claw was wildly overcooked, but the rest of the creature was tender and basted with a pleasantly spicy orange mayo-butter. When Ian explained the orange was sriracha and she could request the lobster roll without it, Fran signed on for the summer.

Our server recited the “seasonal cakes made in house,” then Ian sent out chocolate stuffed chocolate, a slice of red velvet, and our favorite, an ambrosial coconut. It’s a life choice: A teeny bikini or coconut cake. You can’t have both. Tillie’s. 290 Old Montauk Highway 631 668 2345

Harlow East: On the Waterfront.

Harlow East on the Sag Harbor Marina had just opened for the summer that Wednesday. We came early to watch the sun set over the water and the sea darken. The man sitting in the first booth looked up, shook his head, blinked his eyes and stopped us. It was Mr. Harlow himself, Richie Notar, just arrived on the jitney to get his team energized for the big weekend. He proudly led a tour of the art: a Warhol print, butterflies trailing off onto the wall, fish cavorting on mirrors.

We were alone. No one came. We were charmed by the solitude, watching a yacht maneuver in the harbor. My friends live in East Hampton, so they find the summer invasion particularly harrowing. She ordered a local chardonnay. I sipped a rioja. Richie was wearing horizontal stripes and if he had lain down on our navy calf’s-hair banquette with its vertical striped back, he would have been invisible. But he was discreet and left us alone – sending out lobster sliders on a board once he realized we hadn’t ordered them.

My antipasti board, at just $14, seemed generously over-endowed too — enough for three of us to share – a whole burrata, a ruffle of soppressata salami, and a hill of vegetables doused with fig balsamic. I couldn’t get my pal to say anything bad about her brown paper bag of fritto misto even though two shrimp, two scallops and six chunks of fried tuna are not my idea of seafood paradise, and she left most of the tuna. We shared her chopped salad too – a pleasant mix of chickpeas, cucumber, toy-box tomatoes and goat cheese with a sherry vinaigrette.

The farmed salmon was rare, as I’d asked, but flavorless, even with its little top-knot of Asian pear slivers, but I finished off the corn confit (confit means canned, I guess). Apparently $28 linguine with lobster and $32 farm salmon is what Masters of the Universe and their offspring expect. I can afford it too, but I prefer a gentler tab.

Would we like dessert? The waitress offered funnel cake. “Like at a carnival,” she said. We resisted since we had a fresh baked pie waiting at home. The young manager, new to the Hamptons from California, asked where we’d bought our pie. We sent him to Round Swamp Farm. 1 Long Wharf Road Sag Harbor. Harlow East. 631 725 5858. Music by Twilo 10 pm till 2 am Friday and Saturday

It’s the new, ritzier Osteria Salina now. That sprawling house off the highway in Wainscott that has been half a dozen roadhouses over the years, has been cleaned up, painted and fussed over to suit the ambition of Chef Cinzia Gaglio and her husband Tim. “We’re not even open yet,” Gaglio greets us. “We don’t have our liquor license yet.” But there are French bistro tables and chairs in a garden out front, and a sedate Georgica Room overlooking the pond. And the Thursday before Memorial Day, the place is quickly filling up with fans who fell for Cinzia’s sparking Sicilian food in the smallish space behind the Bridgehampton Candy Kitchen.

We’ve been seated barely two minutes and Gaglio delivers the house’s signature sliced cucumber. What makes these thick rounds so good? Salt and a scattering of oregano. A runner from the kitchen drops off caponata and slices of melba toast to pile it on.

My friend Howard discovers he likes charred octopus decked out with fava beans and fingerling potato slices surrounded by parsley pesto. I can barely make a dent in the huge plate of Grandma’s Misticanza salad, a daunting gathering of dandelion, spinach, arugula with tomato and shaved pecorino dressed in a straightforward red wine vinaigrette.

Fran has been on a fritto misto binge. Salina’s bountiful heap is the best so far – an impressive collection of sea critters and zucchini ribbons with a tumbler of spicy arrabbiata sauce, to dip or not. Oil cured olives add oomph to the classic Rigatoni alla Siciliana with eggplant and tomatoes I’m sharing with my host.

By the time my veal arrives, draped in lush whole red and yellow peppers, I am too full to do more than taste. Yes, it is rare, exactly as I like it, chewy but not too. Do I imagine the prices have ballooned a bit to finance this grand new space? Maybe. Starters are $16 to $22. Pasta $24 to $32, secondi $32 to $50. I’m getting used to living like the one per cent now. This is my favorite dinner of the week. Perhaps when I’m back, I’ll pace myself and try a sweet torta. Osteria Salina. 108 Wainscott Stone Road, 631 527 5396.