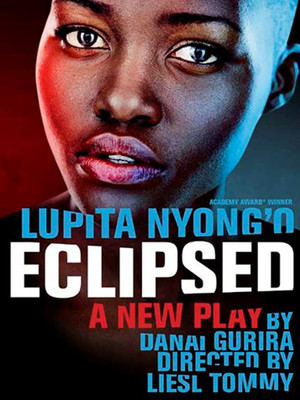 “LUPITA NYONG’O is ONE OF THE MOST RADIANT YOUNG ACTORS TO BE SEEN ON BROADWAY IN RECENT SEASONS. DANAI GURIRA’s SOUL-SEARING play, directed with CLARITY AND FORCE by LIESL TOMMY, reminds us of something PROFOUNDLY IMPORTANT: AFRICAN LIVES MATTER.” -The New York Times, CRITICS’ PICK

On the heels of her Academy Award®-winning, breakout performance in 12 Years a Slave, LUPITA NYONG’O stunned critics and audiences in the Public Theater’s sold-out hit ECLIPSED—the “scorching and powerful” (The Guardian) new play by Zimbabwean-American playwright and actress DANAI GURIRA (star of AMC’s “The Walking Dead” and co-author of In the Continuum). Now, the global star makes her Broadway debut in this “must-see” (NBC New York) production written, directed and performed entirely by female artists.

ECLIPSED is the story of five extraordinary women caught in a struggle seemingly beyond their own power. Brought together by chance and bonded by devotion, they forge a close-knit community… one that inspires them to feats of increasingly greater strength. Directed by South African-born LIESL TOMMY (The Good Negro, Appropriate) ECLIPSED is a stirring tale of hope, humor and resilience—and the only new play by a woman on Broadway this season.

* Offer valid for performances through 6/19/16.  Blackout dates may apply. Offer subject to availability and prior sale; not valid on prior purchases; cannot be combined with any other discounts or promotions. Regular prices are $77-$149. All prices include a $2.00 facility fee. All sales final; no refunds or exchanges. Phone and Internet orders are subject to standard service fees. Offer available for select seats and performances. This offer may be revoked or modified at any time without notice. Cast and performance schedule are subject to change. For a complete schedule, call or visit Telecharge.com.