“Suffragette” Reminds us to Never Take our Vote for Granted 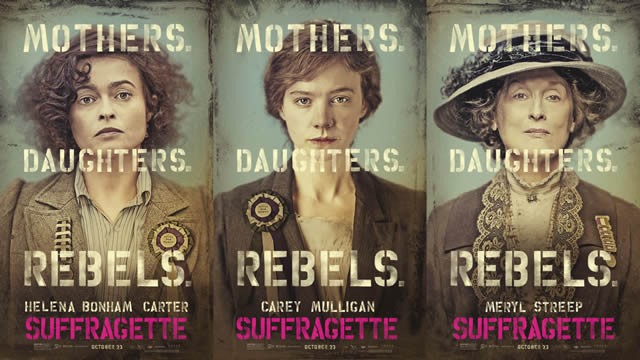 When was the last time you paused to think about your right to vote as a woman? Maybe never, but the fact is that in the U.S. women were only granted the right to vote in 1920. The U.K. took even longer, and it was the international Woman Suffrage Alliance that was formed in 1904 that led to way to many countries granting women that right. And by the way, women in Saudi Arabia still do not have the vote. Which brings us to “Suffragette”, a powerful and moving film that focuses on the women in the U.K. who risked everything for their right to vote.

We recently had a chance to screen the film, thanks to an invitation from The Moms, and were especially excited that the director, Sarah Gavron and writer, Abi Morgan, part of the female filmmaking team which includes producers Alison Owen and Faye Ward, were on hand for a talkback.  This film proves why we need more women filmmakers! We have a video below of some of some of the talkback with the director and writers.

Inspired by true events, SUFFRAGETTE is a moving drama exploring the passion and heartbreak of those who risked all they had for women’s right to vote – their jobs, their homes, their children, and even their lives in early-20th-century Britain.  It stars Carey Mulligan and Helena Bonham Carter, both fabulous in this film, and features a cameo by Meryl Streep, who plays the real life activist Emmeline Pankhurst.

The stirring story centers on Maud (played by Carey Mulligan), a working wife and mother whose life is forever changed when she is secretly recruited to join the U.K.’s growing suffragette movement. Galvanized by the outlaw fugitive Emmeline Pankhurst (Meryl Streep), Maud becomes an activist for the cause alongside women from all walks of life. When increasingly aggressive police action forces Maud and her dedicated fellow suffragettes underground, they engage in a dangerous game of cat-and-mouse with the authorities, who are shocked as the women’s civil disobedience escalates and sparks debate across the nation.

The film will be released in New York and LA on October 23. Don’t miss it.  Watch the trailer and the video with the filmmakers below.