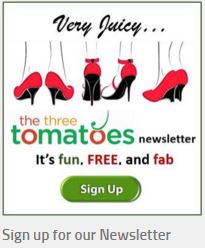 Coming off of the excitement of the Oscar’s, I have even more desire to go out and lose myself in the magic of the cinema. Two upcoming festivals bring unique films to our area. The Ocean Film Festival, with films highlighting the mystery of the ocean and The Sonoma International Film Festival featuring independent productions.  Yes, you live here, but have you ever considered a North Beach Walking Tour and a visit to The Beat Museum? Maybe your closet holds a few vintage items?  View even more, from before our time, at the Vintage Fashion Expo! 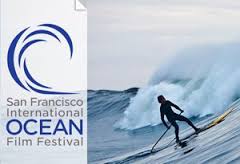 The 13th year of this unique film festival begins with a gala “Off the Reef” on Thursday March 10th at the Golden Gate Club in the Presidio. The mission of the festival itself is to “inspire us to appreciate and care for the ocean by revealing its wonders through independent films”. The films being showcased are not usually available for viewing to the public. Included are short films from Australia, the US, Mexico, Peru and other countries.

The focus is on everything surrounding the ocean, from sharks to surfers and life on the reef. Filmmakers will be on hand to answer questions after the programs and panel discussions are also included. If you have any interest in the majesty of the ocean, this is a must attend event. Get the details.

A five-day film event in Sonoma, with world class cuisine and exceptional wine. What a way to be entertained. Over the past 19 years, this International film festival has attracted famous filmmakers and actors Bruce Willis and Susan Sarandon have been known to make appearances at this intimate experience. Who will surprise us this year?

There will be over 90 films showcased, including independent features, documentaries, world cinema and short films. Great venues with an intimate setting will dominate. This year theatregoers can enjoy an SIFF Village with a hospitality tent, food court; our areas ever present food trucks and yes, daily happy hour with music, local tasty vino and festive cocktails.

Have you ever considered a walking tour of famous (delicious) North Beach? I imagine when you visit other cities or countries you might take a walking tour to get familiar with your surroundings. I have and I love them. Going on one in your own backyard can open your eyes to the familiar as well as the undiscovered places near your home. Food tours of San Francisco guides you to hidden gourmet gems and off-the-beaten path spots.

You will learn tricks of the trade from local artisans and sample delectable fare. Six different stops will leave you satisfied and wanting to re-visit often. One of the stops is the world famous deli that gave the Pope salami. Other fun facts will be unearthed as you learn about the architecture as well as how the people in the neighborhood influenced the yummy food you will be enjoying. Monday – Saturday. For more info click here. 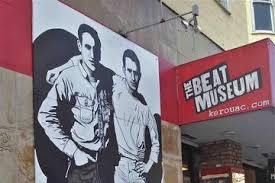 After you walk and munch your way through North Beach, a visit to The Beat Museum will entertain you in a different way. Ok Tomatoes, anyone remember The Beat Generation? Jack Kerouac – of course! The Beats, as in beaten down and beatific, were a collective of writers, artists and thinkers that celebrated life in San Francisco in the 1950’s. This tomato was but a wee child then, but I am familiar.

This museum (only in San Francisco of course) curates exhibits and hosts special events dedicated to spreading the spirit of The Beat Generation. They carry on the Beat’s legacy by exposing their work to new audiences. Tonight, March 4th, On Fire! “Women of a Different Beat” celebrates International Women’s Day by presenting 7 of the Bay Area’s best women poets. Film discussions, storytelling, jazz and readings are some of the offerings you will find at this cultural haven. 540 Broadway Daily 10:00 – 7:00.  Get more information on the Beat Generation. 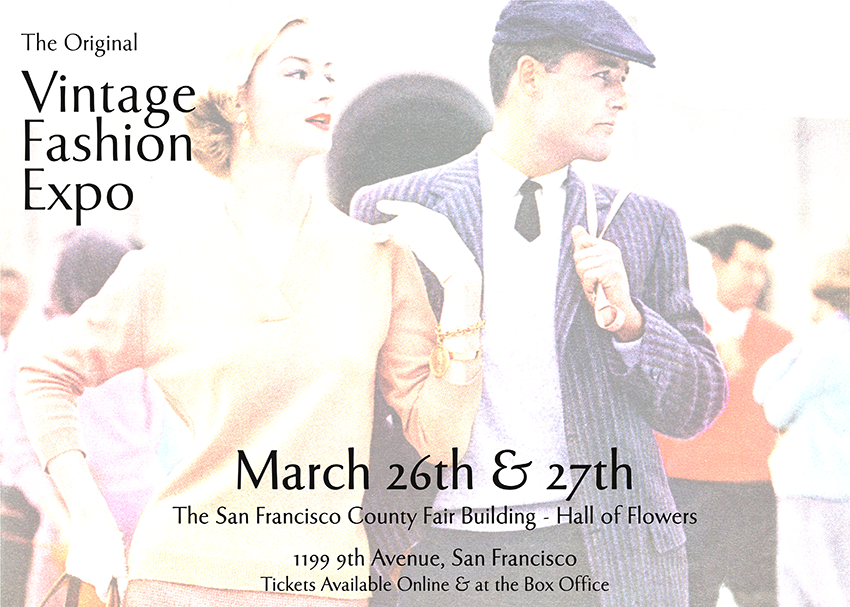 Ah my fellow tomatoes – remember hot pants? How about Mondrian striped dresses and fishnets?  I wonder, are they vintage now? I would have to say yes, but I tossed those things eons ago. Perhaps they will land at the Vintage Fashion Expo. As I may have mentioned a dozen or so times, I adore fashion – and fashion of any era. I dream of dancing in the fringed flapper dresses of the 20’s, lunching in the nipped in shirt waist dresses that began in the 40’s, and I adore a Downton Abbey inspired gown for my imaginary balls.

The Vintage Fashion expo takes place 5 times a year in both San Francisco and LA and you can find clothing, jewelry and accessories from the late 18th century to the 1990’s.  Way back in 1987 a group of dealers in San Francisco saw the growing interest in vintage fashion and created the expo that now attracts designers, collectors and vintage enthusiasts from around the world.  There is nothing like seeing a Hollywood icon on the red carpet attired in Vintage Halston, Dior, and Chanel. Here is your chance. There will be affordable items as well as those for the label obsessed. The treasure hunt alone will be entertaining. Whatever your style, it’s there!