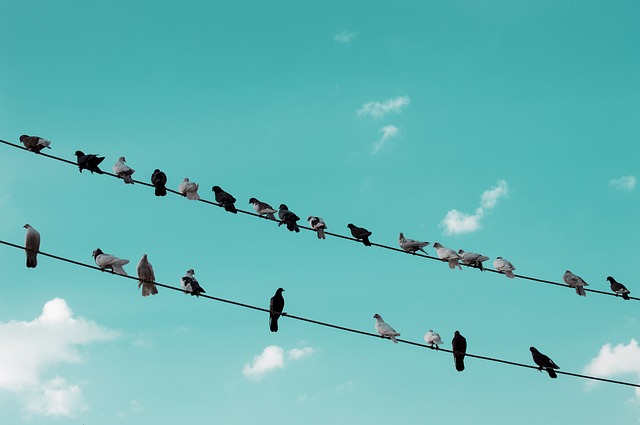 As I was driving along Montrose the other day, I saw what looked like a bird convention.

Flocks seemed to break out of formation and seek every available inch on nearby streetlamps and the roof cornice of Jeri’s Grill, and I don’t think they were lining up for a booth or were interested in sampling their biscuits and gravy.

I had to pull over and watch them for a few minutes. I kept thinking about the line from the Robert Frost poem, “…And miles to go before I sleep,” from “Stopping by Woods on a Snowy Evening.”

These birds were flying south for the winter. A long journey, but one that they were compelled to take each year. No need for GPS or special navigational device. Maybe they knew the direction to fly from the feel of the sun on their backs.

And just as certainly, they knew when to take advantage of a resting spot.

I used to hang out by the Lincoln Park lagoon in the fall and marvel at the sight of Canadian geese flying in V-formation. Hard to believe the same birds that seemed so oddly proportioned and awkward on their feet could look so elegant in flight.

The birds hanging out at Jeri’s roof were smaller and more mundane. Their flight path, while not as long or constrained by the shape they took for group flight, was challenging because of the sheer size of their group.

I wondered if the same group stayed together for their entire journey or if individual birds broke away from one flock and reattached to another after resting, when they were ready to move again. There must have been over thirty.

I thought about summer vacations when I was growing up, road trips to the Wisconsin Dells or South Haven, Michigan. My father would often pull off the highway at a rest stop, even when we didn’t need gas.

Rest stops usually included toilets and vending machines and often included a place to eat and a gift shop.

Before these roadside oases featured familiar fast food franchises like Subway, our favorite rest stops were anchored by Stuckey’s. My sisters and I could get lost wandering through the gift shop. We would invariably bring pecan divinities or log rolls back to the car, making the next leg of our trip messier but oh-so-much sweeter.

It’s amazing how many rest stops cross my path in any day. I don’t usually give their presence much thought.

At large indoor shopping malls, there are atriums with greenery (even plastic greenery can be welcome after staring at modern Plexiglass displays). When you need to suspend exercising your credit card — which we all know can be exhausting — you can head to the food court and sit down.

There are usually coffee shops by commuter stations. Fitting that places where people are on the go are surrounded by places made for stopping.

There are also benches by bus stops, alongside walking paths, or overlooking scenic views. I thought of this phenomena as little miracles as I watched the migrating birds on the roof of Jeri’s Grill.

It must be an overlooked law of nature that when you have to rest, the perfect resting spot appears, or maybe when you need to take five or ten. minutes, any place you stop seems like the perfect spot.

Appreciating welcoming places to rest and taking the time to give yourself a break is no small thing.