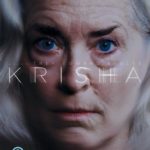 We don’t often see a 60-something-year-old female protagonist but in Krisha she packs a wallop. The drug-addicted alcoholic, who wants to reconnect with family she hasn’t seen in years, journeys to her sister’s house for a volatile Thanksgiving.

The predictable story is, at times, uncomfortable. Yet there’s a warmth and authenticity at play, making this first feature by Trey Edward Shults hard to not appreciate. Using some of his own family in the cast and his mother’s home as location provides a potent intimacy. His aunt, Krisha Fairchild in the lead, offers a nuanced portrayal of struggle; we can feel her seething self-pity.

The 27-year-old writer/director has declared his debt to John Cassavetes, namesake of the award he received from Film Independent Spirit. But he also invokes Darren Aronofsky here: visceral fast-cuts and shaky camera that sicken in a dizzying similarity to the substances themselves. And at times it’s loud. However, fasten your seatbelts; it’s going to be a worthy ride.