A few of roving photographer, Eliot Hess’s images of Miami this week.

The Frost Art Walk, one of my favorite activities takes place next week. Some of the best jazz musicians in South Florida will perform later this month at the Miami Botanical Garden. We finally got to dine at Carbone of South Beach, the most popular “A” crowd restaurant in Miami. And this spring you’ll be able to watch movies under the stars. Just a few more reasons to love Miami.

One of my favorite activities is about to take place next Tuesday, March 15, from 12pm to 1pm. Amy Galpin, the  Chief Curator, for the Frost Art Museum, is going to give a tour of the public art on the campus of Florida International University. This is a very special treat because the art sculptures surrounding the museum on the FIU campus is so striking that you want to know more about it. I remember the first time we went to an event in the museum. I wanted to stay outdoors because I thought some of the works were so clever. It’s rare to see so many outdoor sculptures in one area.

Galpin is going to share insight into works by Albert Vrana, Glexis Novoa, Carlos Alfonzo, among others. She encourages everyone to wear comfortable shoes and sunscreen because we will be walking around for an hour. Following the tour, attendees will be invited for coffee and pastelitos on the museum’s patio. This event is free and open to the public. No need to register, just drop in. How easy is that?

The Patricia & Phillip Frost Art Museum is considered to be a premier on-campus museum. Since they opened their doors in 2008, the museum has provided the community with free access to world-class art that spans cultures and time periods.

As one of the largest academic museums in South Florida, Frost Art Museum also provides FIU students opportunities to engage with art through our exhibitions, collections, internships, and more. The museum sits on the Avenue of the Arts, near the 107 Avenue entrance to the Modesto A. Maidique Campus. Modesto Maidique Campus, 10975 SW 17th Street, Miami, FL. 33199. The Patricia & Phillip Frost Art Museum is proud to be an official Smithsonian Affiliate.

There is no question about it, people who live in Miami, or are visiting, want to spend as much time outdoors as possible. It’s one of the few places in the United States where you can do that all year long. One of the most picturesque areas where you really come face to face with nature, while enjoying the fresh air, is the Miami Beach Botanical Gardens which happens to be right next to the Miami Beach Convention Center. Keeping checking the schedule, because the MBBG offers all kinds of entertainment that you don’t want to miss.

For example, on March 31st, some of the best jazz musicians in South Florida will be performing  along with Broadway star Avery Sommers (Chicago, Showboat, Ain’t Misbehavin’). Admission price is $35 non-members, $25 members. The doors open at 7pm and show begins at 8pm. It ends around 10pm so that’s a fun evening. The Botanical Bar will be serving light bites and cocktails. You will be wise to bring a blanket or lawn chair because there is limited seating.

Miami Beach Botanical Garden is a 2.6 acres urban green space in Miami Beach, Florida that was founded in 1962. It was transformed in 2011 with a $1.2 million landscape renovation designed by South Florida landscape architect Raymond Jungles. The new landscape showcases native Florida plants and trees including bromeliads, palms, cycad, orchids and many others. There is a Japanese garden, native garden and bio-swale, and water gardens including ponds, fountains, and a wetland with mangrove and pond apple trees.

Dining with the A Crowd

I finally dined at Carbone’s of South Beach last night. The only reason I got in was because my BFF’s Gail Williams and Dawn McCall had the reservation and suddenly couldn’t use it. They graciously gave it to me. I jumped at the chance because getting a reservation at the most popular, and revered restaurant in Miami Beach, is almost impossible. You have to call the restaurant 30 days in advance for a reservation, hold on the line for what seems forever, or go on Rezy and pray your timing was just right. 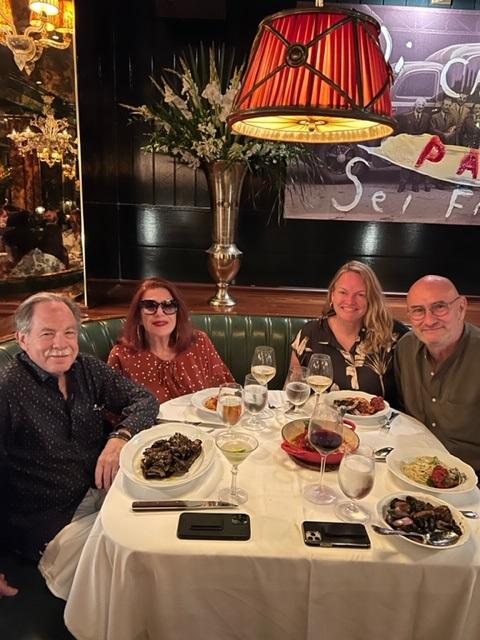 I don’t feel any restaurant is worth that kind of effort, but Carbone’s is a block from my condo so I didn’t want to keep telling folks I was never there. I went with my husband Eliot and two dear friends, Alison and Jan Gerits, who love going to new restaurants. I warned them about the exorbitant prices but I don’t think anyone of us expected a tab for $170 each. Then when it came time for the desert, we were handed a check at the same time, and told that the folks with the next reservation were waiting. I would have normally told the maitre ‘d to kiss my ass, but I was there with very refined friends so I shut my mouth. Don’t think I didn’t notice that they seated us against the wall in the back because Eliot and I are 30 years older then their target audience.

The gossip that I just told you about is something I just have to live with because I reside in South Beach. Everyone is young, sexy and practically naked. If I was operating a restaurant I would probably do the same thing. When we left the restaurant, I noticed that several tables on the outside were occupied by seniors. They were properly placed behind the bushes. 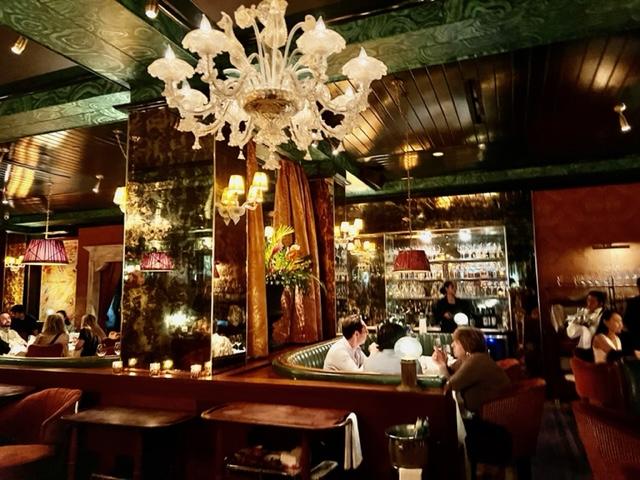 In any case, I would recommend the restaurant to anyone who could afford it. The food is delicious, the decor is very elaborate and the service, on the whole, was very gracious minus the departure speech.

Carbone was founded by Mario Carbone, Rich Torrisi, and Jeff Zalaznick. Carbone is one of the most celebrated Italian restaurants of the last decade. It’s located in Greenwich Village in New York. Zalaznick, Torrisi, and Carbone—who together own the company Major Food Group—are also behind such iconic concepts as THE GRILL, Sadelle’s, ZZ’s Clam Bar, Parm, and Dirty French. Carbone’s is located at  49 Collins Avenue, Miami Beach.

Movies Under the Stars 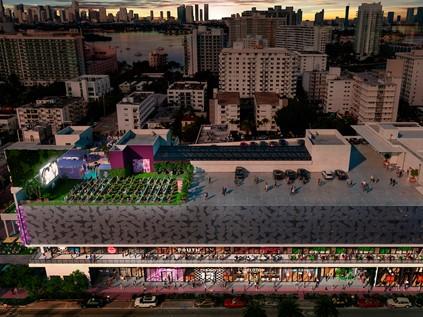 The first time I went to a movie in an open-air arena was in Monaco, thirty years ago. I thought it was so cool to be sitting under the stars looking at a huge screen. I kept turning my head from left to right to get a glimpse of other folks in the audience. This was the first time I could actually see people watching a movie. Up until then, I was always in a dark movie theater.

I am going to be able to have that experience all over again when the Rooftop Cinema Club comes to town. The company is bringing its outdoor movie series to South Beach on the roof of 1212 Lincoln Road in the Spring. This will be the ninth location for this concept. Other areas include London, New York, Los Angeles and San Diego. Moviegoers will get to see Miami’s dramatic sunsets from either Adirondack chairs or loungers. The movie will be presented on a giant LED screen. Everyone will receive a wireless headphone to ensure the sound and volume is just right.

Miami is the perfect spot for an outdoor theater. The evenings are always wonderful because there is usually a slight breeze and the moon shines bright. The fact that the new Rooftop Cinema Club is conveniently located on Lincoln Road is an extra bonus because of all of the restaurants and shopping nearby. I am looking forward to an extreme night of sheer entertainment.