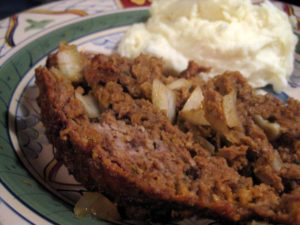 When I grew up, back in the days before cholesterol was a household word, a time when anything called Polly unsaturated might have been taken for a stripper, who would have thought that a plate of juicy meat loaf and buttery mashed potatoes would become a major food indulgence of our time?

Sure, lots of people still make it and eat it daily, but not without a certain amount of guilt. The heart specialists, nutritionists and food media have made sure of that. And those who don’t eat at home, the jaded restaurant-goers and gastronomic thrill-seekers among us find that a homey plate of molded beef and mashed spuds hits just the right down-to-earth spot. So much so that the classic American combo, which was until recently unheard of as an offering in good restaurants, is threatening to become the rage of our American Cuisine age.

Still, I have trouble serving it to guests. But it was my friend The Professor’s birthday dinner party, so he got to choose the menu. How can you deny a guy whose wishes are so easy to fulfill? On the other hand, how was I going to present this humble meal as festive fare?

Blue plates to the rescue. Recently unearthed from a carton stored for years in my parents’ garage, the blue plates were bought for 50 cents each ate least 15 years ago from an old-fashioned Five-n-Dime that was going out of business. Take a nice slice of meatloaf, attractively streaked with spinach, arrange it with a heap of garlic mashed potatoes plus a vegetable of the day (say, buttered acorn squash), and you’ve got Schwartz’s blue-plate special.

In a small skillet, sauté onion in butter until golden, about 10 minutes.

Meanwhile, combine bread crumbs and milk; let stand so crumbs absorb milk, then, with a fork, beat in the egg.

Take the chopped spinach in small handfuls and squeeze out excess moisture.

In a large mixing bowl, combine the ground beef, the sautéed onion, the brad-crumb mixture, salt, pepper, nutmeg, and grated cheese. As you add the ingredients, distribute them around the surface of the meat, don’t just plop them in.

With you hands (or a fork, if you absolutely can stand using your hands), blend everything together until mixed well. Add the spinach and mix again, just until all the ingredients seem equally distributed. Don’t overmix or knead the meat.

Turn the meat mixture into a rectangular baking dish and pat into a rye-bread shaped loaf about 4 inches across at the bottom and tapered towards the ends. Bake in a pre-heated 350-degree oven for 50 to 60 minutes, depending on doneness desired. Let it stand at least 5 minutes before serving. Serve hot or at room temperature.

As the professor’s specific request, I looked up Julia Child’s recipe for garlic mashed potatoes from Mastering the Art of French Cooking, Volume 1 (1966), her masterpiece. I also remember the dish fondly and recall that I made them quite often back in the 1960s. But when I reread the recipe I was appalled. Julia not only has us making a flour-thickened milk-based white sauce to beat into the potatoes (starch on starch?), but instructs us to use a minimum of 1 quarter-pound of butter plus three to four tablespoons of heavy cream – for a mere 2 1/2 pound of potatoes. I was prepared to indulge the professor, but I was not prepared for a coronary crisis.

Therefore, the following is Julia’s recipe, not as published, but I’m sure as she herself would update it 20 years later. (P.S.: The professor didn’t know the difference.)

In the same saucepan, combine the whole garlic cloves with milk. Bring to a very low simmer and let simmer about 20 minutes, stirring frequently so the milk doesn’t scorch. When done, the garlic will be very soft. Put milk and garlic in into a blender r food processor and process to a smooth purée. (Can be made ahead. If you do, heat just below simmering before beating into the potatoes.)

Meanwhile, peel the potatoes and cut into quarters. Place in a saucepan with cold water to cover. Cook until tender. Drain immediately.

Put the potatoes through a ricer, then return to saucepan over low heat. Beat in the garlic-milk mixture. Beat in the soft butter and salt and pepper. (May be made several hours ahead. But should never be refrigerated. To reheat, place over low heat or, as Julia suggests, in the top of a double boiler, beating frequently.)