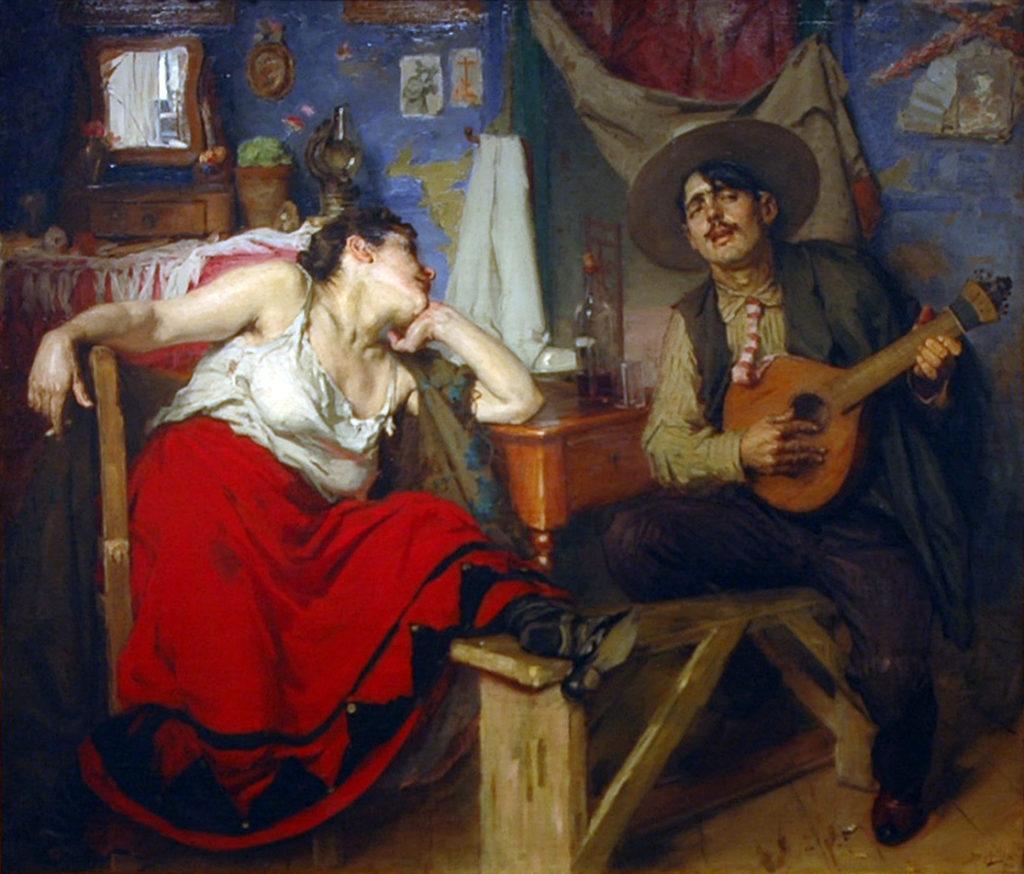 One of my priorities for my trip to Portugal was to hear Fado as often as possible.

Popularized in the early 20th century, in Lisbon, Fado songs can be about anything but are usually composed in minor keys and capture a feeling of longing.

There are contemporary Fado singers, fadistas, and songs can be performed with accompaniment or not. Remarkably, even rock star, slickly produced performers take the tradition seriously.

There’s a sort of universality and timelessness about a man or woman capturing their yearnings in a song.

On my first night in Lisbon, walking around the Alfama, a man, who was promoting a restaurant and club, approached us. After listening to his pitch, Midwestern skeptics that we were, my friend and I excused ourselves and walked on.

Not having a better idea where to go, we came back and let him lead us to a small restaurant and club down a narrow street just off the main drag.

They had a limited menu, although very good cod (the specialty of the region), and they served food and drink in between short sets. Four different fadistas visited the club during the evening, sang a selection of songs, accompanied by two house guitarists, then went to another supper club where, I assume, they did the same thing.

We went to another supper club two days later, in the Chiado district, where the food and music were higher quality — at a much higher cost.

A couple days later, we were in Coimbra, where I had been forewarned that Fado was different than it was in Lisbon. Following their local tradition, where Fado was sung by male university students to the women they wanted to woo, only men sang.

After catching touristy shows at Casa de Fado and Fado ao Centro, at a local diner where we lunched on piglet and potato chips, we were directed to visit Bar Diligencia (which roughly translates to stagecoach).

The singer, a bearded young man, who looked like he could have been a college student anywhere in the world, sat on a chair and alternatively used two different guitars. There were only about eight people in the bar. The manager spoke good English and was very welcoming.

The Fadista sang a few traditional tunes. In between numbers, he asked members of the audience where they were from. Although our shoes probably gave our origin away, he seemed happy when we said Chicago, the U.S.

In his second set, he asked the audience if we knew Pink Floyd. Well, of course. I was surprised by the question. What did Pink Floyd have to do with Fado?

I expected that his planned song included an audience participation section, and he was subtly preparing us to chime in at the right point.

To my surprise, he began the most beautiful acoustic version of Wish You Were Here I had ever heard. Then it dawned on me.

What could capture the spirit of Fado more? What song could top this one for expressing pure longing? WISH YOU WERE HERE…

I considered my own longings. It seems that I’ve spent most of my life trying to find my voice; to find an audience and be heard. I’ve looked for opportunities to make my feelings known through writing and have succeeded, to some extent, at this.

But many times I’ve had problems speaking up within relationships. Or, when given the opportunity to make a point in a discussion, I couldn’t get the words out. I was afraid of saying things wrong or of not being understood.

And here I was – at Bar Diligencia – in a tavern, in Coimbra, Portugal, and I knew what was coming. I knew that the singer would lead everyone up to a certain point in the lyrics and go silent expecting everyone who knew Pink Floyd would take over.

For a few moments, I worried if I’d remember the words, but when the performer stopped singing and played guitar for everyone else to fill in the words, I belted out the phrase.

Like two lost souls swimming in a fish bowl – year after year.

Wow, I felt like a fadista. Suddenly, I was unafraid of my longing being heard. In fact, it was celebrated. It was shared.

Remembering the words to a song (and giving those words voice) is no small thing.