Grace and Frankie: Turning Ageism on Its Head 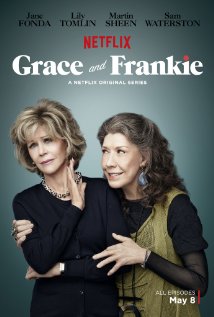 Is age really just a number? This week we had a conversation with some beautiful, accomplished fabulous tomatoes who ranged in age from 40s to 80s, and the topic of “do you tell your age” came up. The answer was a resounding no, and not because we’re not comfortable with our ages. It’s the perceptions of others when you throw out a number, as in that ugly word “ageism”. And yes, like all “isms” ageism is demeaning, negative and stereotypes us. Which brings us to a new Netflix comedy series, Grace & Frankie that turns ageism on its head.

Three cheers to Marta Kauffman (co-creator of Friends), and Howard J. Morris the creators of Grace & Frankie, and to Netflix for greenlighting the show. Here’s why. The show stars 4 fabulous actors – Jane Fonda, Lily Tomlin, Sam Waterston, and Martin Sheen who all happen to be in their 70s and play characters in their 70s who are still sexy, vibrant, sensuous and passionate about life. What we love most is that it’s not a show about “age”, yet doesn’t hide from age either. It’s a funny, smart series about sex, love, and relationships whose characters just happen to be in their 70s.

In the first episode of the show, Grace (played by Jane Fonda) and Frankie (played by Lily Tomlin) are informed by their husbands of forty years, (played by Sam Waterston and Martin Sheen) that they are ending their marriages because they’ve actually been in love with each other for twenty years. Grace and Frankie who have never much liked each other and are totally different personalities – Grace is a high-powered, uptight successful entrepreneur, and Frankie is still a pot smoking, crystal hanging hippie, end up living together in the beach house the two couples had co-owned. Throw in the grown kids from both sides who are coping with the shock that their Dads are gay, and the fun begins!

The last time Jane Fonda and Lilly Tomlin were on screen together (along with Dolly Parton) was in 9 to 5 and it’s so much fun to see them back together again.  And Sam Waterston and Martin Sheen are absolutely wonderful as the now out of the closet, in love gays. You can tell they are all having a blast doing this show.

The show’s creators were recently interviewed by the Writers Guild of America, and the interviewer gives high marks to Netflix for greenlighting a show that flies in the face of so many things Hollywood has told us it “knows”: audiences don’t like things about women or things about older people, comedy doesn’t travel well overseas.

In that interview, co-creator Howard J. Morris says, “The fun part for us was that nobody was doing this show. And nobody was doing shows with older women. In fact, in our initial conversation, I kid you not, Marta said, “I’ve always wanted to do a show about older women’s sexuality.” This is not the show that anybody else is doing, and that really excited us.”

Co-creator Marta Kauffman adds, “ I cannot tell you that it was a conscious thing, but Howard and I had a lot of conversations about how we wanted this show to be, on some level, aspirational, that it somehow convey to audiences: you know, you really can start your life over at any time.”

“It’s also a very, very hopeful show”, Howard adds, “but very grounded in reality. It’s one thing to be in your 20s and for things to not be working out. There’s still plenty of time to get things right. But when you’re in your 70s, it can feel like the stakes are raised all around.”

Here’s the trailer. Watch the series (it’s worth getting Netflix to see this series) and send the Hollywood naysayers a message that viewers will tune in to shows about women, and shows featuring “older” people”. Let’s change that age perception thing!!