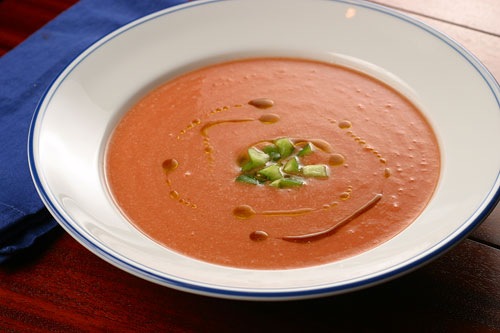 I came home from Spain eager to try my hand at gazpacho, which I haven’t made in years. And it was and still is, after all, the height of tomato and sweet pepper season, the most seasonal essentials for gazpacho. This is a fully pureed version, a modern version made in the blender, the version I ate several times in both Barcelona and Madrid. Gazpacho actually originated in the south of Spain, in Andalucía. But when I was in Andalucía only two years ago in January, it was no where to be seen. It’s strictly a summer dish. You know, cold soup. Don’t expect a tomato red soup from this recipe, like most gazpacho I am served or see in American restaurants, or for that matter recipes I used to make and have published. This one is a pretty pale coral color, and very smooth. You chunk-it-up with garnishes – fried or baked croutons, diced green pepper, diced onion, and diced cucumber, the ingredients that go to make it.

Cut up the peppers and add them to the blender. Push them down to the bottom of the jar, cover and blend again. Repeat with the cucumber, the onion, the bread, and the garlic.

Taste and add some salt. Add the olive oil and vinegar and blend once again.

Serve well-chilled with the garnishes outlined in the headnote above.