Drama at the U.S. Open – Tennis Anyone? 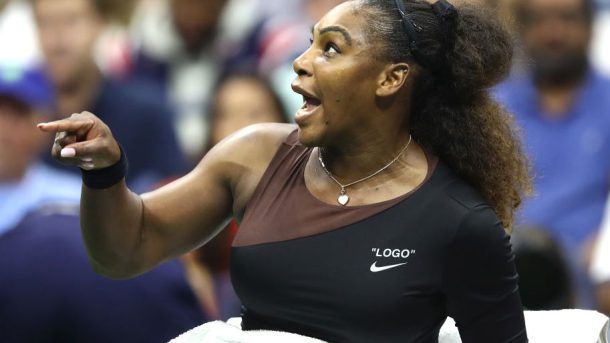 Media commentary has been building up for months in anticipation of Serena Williams’ return to center stage at the U.S. Open.  Her challenges in weathering a difficult pregnancy, a complicated delivery, life threatening medical issues and postpartum struggles have been well documented.  Her resilience, determination, talent and hard work in preparing for her return after becoming a mother have been universally admired.  Her greatness as a tennis champion, businesswoman and mother have been projected in countless commercials, interviews and commentaries leading up to and played throughout the Open. The hype was so breathtaking and complete that even her young opponent Naomi Osaka saw fit to apologize to the fans for winning the match, acknowledging that most of them were rooting for Williams in her quest to set a career record 24th Grand Slam title.  And for the record, I am and have always been a Serena fan.

What happened to make this tennis match turn into such a drama?  What might account for Serena’s meltdown and rage?  What possessed so many in the crowd to be drawn into the dysfunction they were viewing on the courts?  It all started innocently enough. Naomi was playing flawless tennis and easily won the first set 6-2.  She forged ahead in the beginning of the second set and Serena’s frustrations became more and more apparent.  One just needed to look at her body language and facial grimaces.  She was clearly being out played.

Using his discretion to call what is typically recognized as a universal practice going on in open matches, the chair umpire Carlos Ramos gave Serena a code violation about having been coached from her box.  Serena denied this.  Her coach Patrick Mouratoglou in a later interview admitted he was indeed coaching her but acknowledged that she may not have seen his hand singles.  Serena took the citation as an indication that she was being accused of cheating by the umpire. She countered by telling him: “I don’t cheat to win.  I’d  rather lose than have to cheat to win .” Further confusing the emerging and escalating drama, Serena brought in her much media-hyped motherhood role to declare: “I have a daughter and I stand for what’s right for her.  I’ve never cheated and you owe me and apology.”  Things went from bad to worse.

As the second set continued, Naomi maintained her lead and composure.  The initial citation, still festering and striking an emotional nerve with Serena, led to another verbal confrontation with Ramos. Tears streaming down her cheeks she called him a liar and a thief.  “When are you going to give me my apology?  You owe me an apology. Say it!  Say you’re sorry! You stole a point for me”.  Bringing up what she considered a gender disparity, she raised the issue of Ramos’s sexism by saying: “there’s men out here that do a lot worse and because I’m a woman you’re going to take this away from me.”  On the other side of the court,  20- year old Naomi turned away from the drama, silent and stunned trying to retain her own composure and focus.

Serena broke serve to take a 3-2 lead in the second set.  Naomi broke right back and after the game ended Serena shattered her racket by throwing it on the ground in anger.  She was given an automatic second point violation.   Unable to focus on the game and continuing her confrontation with the umpire, Ramos penalized her 1 game for verbal abuse for continuing to call him a liar and a thief. Should there have been another warning before Ramos took this drastic action?  Probably.  Should the coaching rules be changed?  Undoubtedly.  Irregardless, the score was now 5-3 for Naomi who finally won the second set and the championship 6-4.

A recent New York Times article pointed out that “most of the sport’s infamous brats have been men, and they have often been punished for bad behavior.  John McEnroe, the best known instigator, was frequently assessed point and game penalties during his career.  He was disqualified from a fourth-round match at the 1990 Australian Open after a series of outbursts… At this years Open, men have received 23 fines for code violations, compared with nine for women.”

Why wasn’t Serena able to accept the umpire ‘s warning about coaching and focus on the match?  Controversial calls are made in every sport and are part of any game. Athletes and especially elite athletes of any major sport who are under the most pressure to win, seemingly need to find better ways to deal with emotional upsets, bad calls and perceived unfairness to move on.

It’s hard, if not impossible, to imagine that all of Serena’s rage, perceived and real hurts, were triggered solely by a warning by a single umpire.  Could there be other key issues at play, issues that have little or anything at all to do with tennis?   Serena kept saying over and over how she was cheated. Who and what in her life has cheated and disrespected her?  As an African American woman, Serena has faced daunting challenges throughout her life in a largely racist society.  She has had to deal with both overt and covert racism and has been and continues to be criticized about her body and her general fashion style. There have been negative critiques about her father Richard, her romantic relationships, even the murder of her half sister Yetunde Price in September 2003.   Apparently her pregnancy was unplanned.  Could this too be an issue, despite the fact that Serena and the media have made much about her being thrilled to be a mother?  Whoever said that it was easy being a new mother, feeling exhausted and sleep deprived, let alone competing and training for a sport at a world class level?  Serena  talked about standing up for women’s rights and stated that this was an umpire acting out of his own and the tennis world’s sexist history.  Was this incident really only about sexism?  I think not.

The fact is that we all have unfinished business and skeletons in our closet. Serena, as we all do, appears to have unresolved issues that have yet to be acknowledged, addressed and resolved.  What happened during the finals may be an important wake-up call for her as well as for the world of tennis and American society as a whole.  I believe that the very best thing that Serena can do for herself and her game is to take the time and have a long hard look at issues in her life both past and present.  She has already proven to be a great athlete, a courageous fighter and role model for countless millions from all backgrounds, classes, creeds colors and genders.  If she chooses to better understand her own emotions, she will continue to improve and excel even more, both off and on the court.  We as individuals and as a culture could benefit as well by doing the same.

BEATTY COHAN is a psychotherapist and sex therapist and the author of For Better for Worse Forever: Discover the PATH to Lasting LOVE, columnist, national speaker, national radio and television expert guest and host of the ASK BEATTY SHOW on the Progressive Radio Network.  She has a private practice in Manhattan and East Hampton.

BEATTY won numerous junior singles tennis tournaments in Canada, including winning the Manitoba senior ladies singles championship when she was only 16.   Her highest Canadian junior ranking was #10.   She is an active tennis player at the Riverside Tennis Club in New York City.