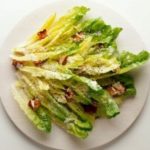 The history of Caesar Salad is well recorded, but here again, is how it came to be.

Caesar Cardini, an Italian restaurateur in Tijuana, Mexico, ran out of food the busy weekend of July 4, 1924. Hollywood stars used to descend in droves on Caesar’s Place because Prohibition was in effect on the U.S. side of the border. By the end of the holiday weekend, Caesar had to rummage around his kitchen to see what he could drum up. There was Romaine, lemons, Parmesan cheese, some going-stale bread (hence the croutons), eggs, and the usual array of condiments, including Worcestershire sauce.

Give the show people a show and they’ll never realize it’s only salad, Cardini thought to himself, or so the legend goes, and he sent his dining room captains out to the tables with rolling carts furnished with salad bowls and those rummaged ingredients, to make a show of the salad preparation. Everyone went home to Hollywood talking about it, making it the only American dish created by an Italian in Mexico.

These days, only sometimes is the original recipe followed, which is why I never order it in restaurants. You never know what you’re going to get.

1) The original Caesar was made with only small, whole leaves of Romaine and was meant to be eaten with the fingers, leaf by leaf.

2) There were no anchovies mashed into the original dressing — and definitely none topping the salad — but those who sought to reproduce the salad tasted the anchovies that are in Worcestershire sauce and mistakenly added them to the dressing. Nowadays, their flavor is expected. I put just a couple of filets in the dressing, which adds a background flavor that even professed anchovy haters don’t detect.

When preparing the salad at tableside, as it was at Caesar’s Place, have all the ingredients measured and at hand. Use small ramekins to hold everything: Put the garlic, salt and anchovy fillets together in one. The mustard, Worcestershire and lemon juice can be put together in another. The egg can be whole, or already separated (discard the white). The oil should be in a cruet, small creamer or pitcher. Have the greens washed, torn and dried. Have the croutons in a bowl, and the grated cheese, recently grated, in another small bowl. Have the peppermill at hand.

In a large wooden salad bowl, glass bowl, or ceramic bowl, combine the cut-up garlic and salt. Using a fork, mash the garlic into a paste, using the salt as an abrasive.

Add the anchovies and continue to mash until they are a paste.

Add the mustard and Worcestershire, still mashing to make a homogenous paste.

Beat in the egg yolk – one can create a little drama here by separating the egg at the table – until the mixture is homogenous.

Beat the oil into the mixture in the bowl, adding a few drops of oil at a time to start, then a very thin stream, you need both hands to do this: One adds the oil, while the other continuously beats with the fork. You should end up with an emulsified dressing that will not separate.

Add the greens to the bowl and toss well to coat the leaves.

Add the croutons and grated cheese and toss again.

Season to taste with freshly ground pepper and toss one more time.

DO-AHEAD NOTE: You can prepare the dressing ahead. Leave it in the bowl and pile the Romaine on top. When ready to serve, toss with the two together, then toss in the cheese and croutons.

BLENDER VARIATION: The dressing can be made in a blender, but the resulting dressing will be thick, essentially a seasoned mayonnaise. Blend the ingredients in the same order as above.

NOTE ON THE EGG: The original Caesar Cardini recipe called for the yolk of a coddled egg, which is an egg that has been boiled for 60 to 90 seconds. This somewhat cooks the egg white but barely heats the yolk. Some sources claim the egg yolk was added after the greens were tossed with the remaining dressing ingredients. I don’t really see the point to this: At that point, it is difficult to incorporate the egg yolk into the salad, and if you beat the egg yolk with the remaining salad ingredients, adding the oil gradually, then the egg yolk emulsifies the dressing, making it thicker and keeping the oil and lemon juice from separating. I do not, in fact, coddle the egg. Since coddling barely heats the yolk, I don’t see the point. I use a raw egg yolk. As for salmonella, this is not as much an issue with eggs as it was even 10 years ago. (Still, do not serve raw eggs to people with compromised immune systems, old people or very young children.) In any case, coddling the egg does not get the yolk hot enough to kill salmonella.

NOTE ON CROUTONS: Do not use seasoned croutons. Some bread bakeries sell unseasoned croutons made from their bread. These can be excellent. Otherwise, cut good-quality bread into 1/2-inch cubes, cutting off the crusts if they are crisp, thick crusts. Spread the bread cubes on a baking sheet and place in a preheated 350-degree oven for 10 to 12 minutes, or until the cubes are dried and crisp to the center.