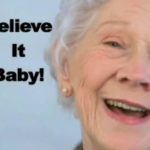 In this wonderful short film, Believe It Baby, produced by In The Trenches Productions and our West Coast Editor, Debbie Zipp, 27 Beauties who happen to be over 40 shoot from the hip about sex, pantyhose, their power and much more. This film has become our closing signature at Three Tomatoes and it gets standing ovations every time we show show it.