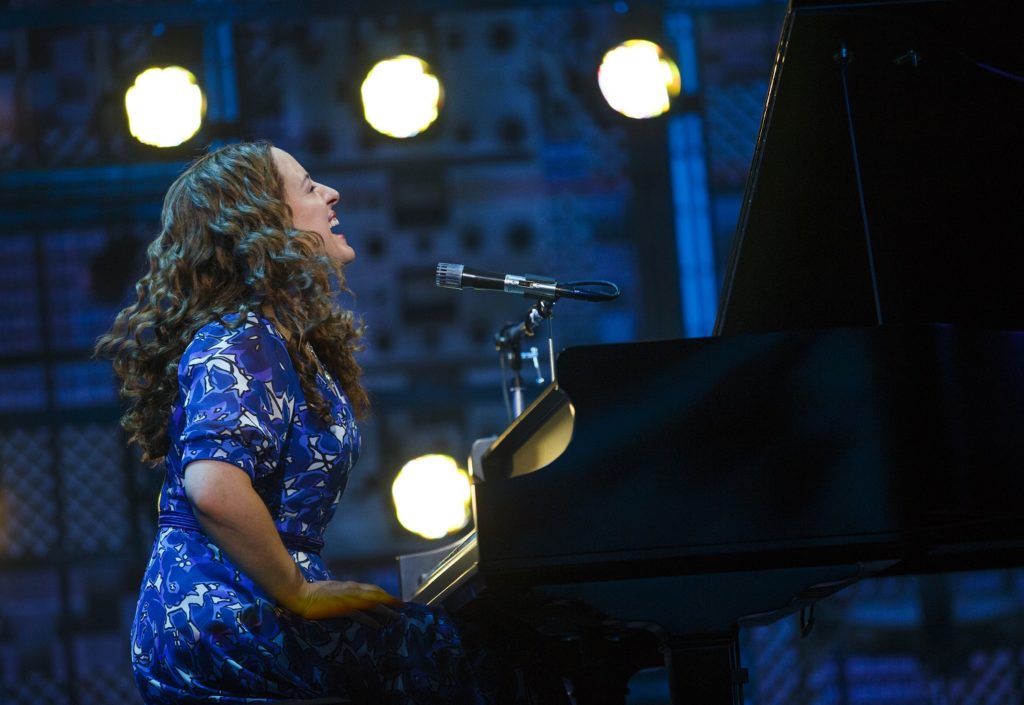 It was a Tony Award-winning vehicle for Jessie Mueller who played Carole King on Broadway and now you’ll see her older sister, Abby, in the title role in Beautiful – The Carole King Musical during its three and a half week national tour stop at the Hollywood Pantages Theatre. “She’s the kind of woman you know you’d be friends with if you met her,” I said to my guest as we exited the theater after the performance. And in that moment, I realized I wasn’t sure if I meant Mueller or King. The sentiment pretty much applies to both.

Baby boomers who grew up alongside King, and those who hear the ache of their own lives in the songs she wrote, can’t afford to miss this production which is satisfying on so many levels. As a soundtrack to a generation that saw women come into their own, it is endlessly inspiring, and for the many women who took comfort in her songs, it is an emotionally fulfilling experience.

The music reflects both the joy and pain of King and her husband/lyricist Gerry Goffin’s (Liam Tobin) relationship, from awkward high school meeting and the beginning of their songwriting partnership through marriage, infidelity, divorce, and her eventual coming out as one of the top female solo artists of her time. It is genuinely full of heart and grounded in a reality that resonates with anyone who has felt the sting of love gone wrong. 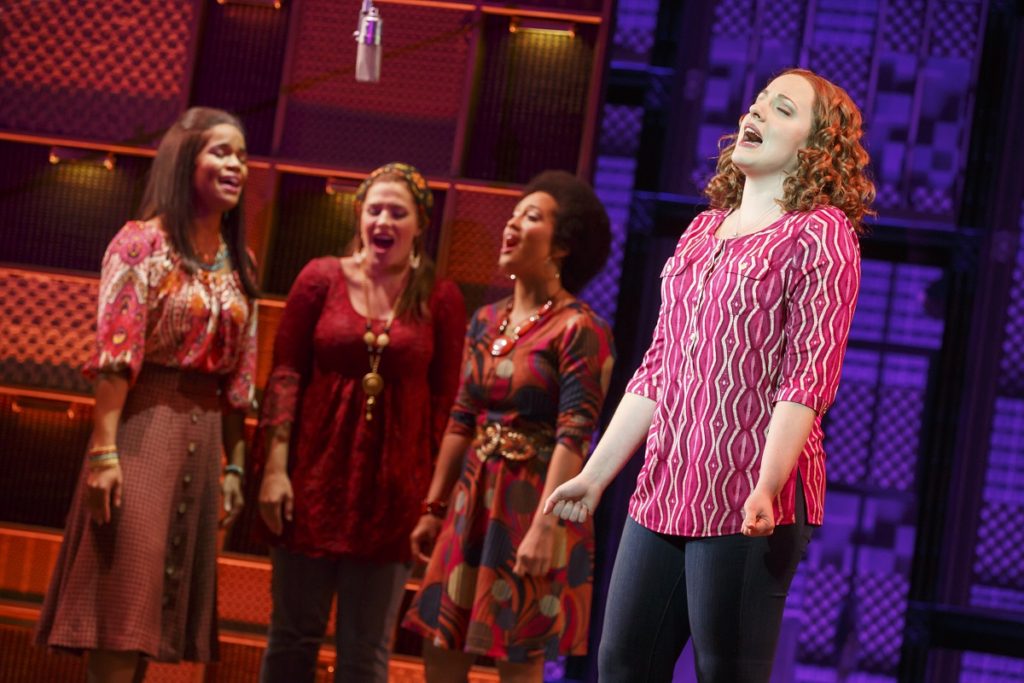 King never meant to be a singer. Songwriting was always her aspiration and she was content collaborating with her husband and writing hits for groups like The Drifters and The Shirelles. But as she says in the opening scene during her 1971 concert at Carnegie Hall, life doesn’t always turn out the way you plan. And happily for us, that means a rich body of work whose impact continues to resonate today.

Douglas McGrath’s book illuminates the back story to songs like the couple’s breakout hit “Will You Love Me Tomorrow,” “The Locomotion,” eventually made famous by their real-life babysitter Little Eva, “Up on the Roof” describing the one place Gerry could find relief from his difficulties growing up, and “One Fine Day,” which captures the bittersweet poignancy of their crumbling marriage.

From Brooklyn to the big city to the suburbs to L.A., the story unfolds with a graceful authority that highlights not only King’s vulnerability but her inner fortitude as well. Mueller channels the essence of her muse, both vocally and in her acting, with self-deprecating charm. She’s just so honest and likeable.

Even Tobin (who sings beautifully) is irresistible and that’s no mean feat when one is playing the philandering husband. They have great chemistry and at any given moment you can see both the surface and the depth of their feelings. 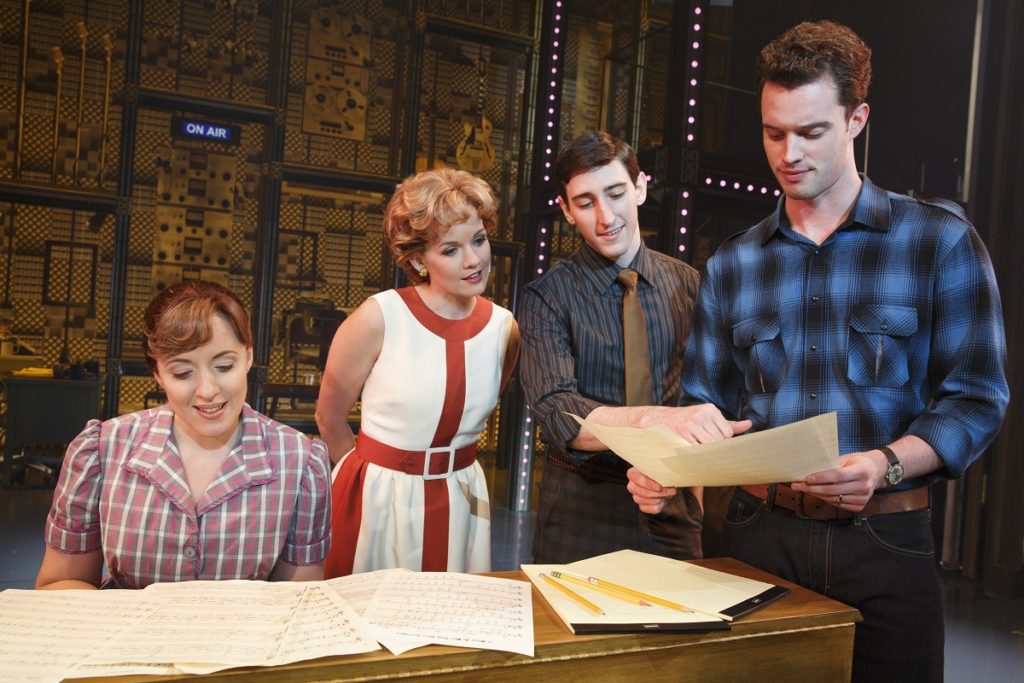 The musical also chronicles the work of fellow songwriters Barry Mann (Ben Fankhauser) and Cynthia Weil (Becky Gulsvig) who were King and Goffin’s close friends and occupied an adjoining studio at Don Kirshner’s (Curt Bouril) 1650 Broadway offices. They bloomed a little later as a duo but when they did they produced such hits as “On Broadway,” “You’ve Lost That Lovin’ Feeling” and “We’ve Gotta Get Out of this Place.” Mann’s hypochondria and Weil’s witty comebacks add a great deal of humor to the story and Gulsvig and Fankhouser excel at providing comic relief.

Of course, that also comes from the care with which director Marc Bruni has crafted the musical and choreographer Josh Prince has staged the movement. Scenes move seamlessly from one to the next on Derek McLane’s stylish set which is more detailed than you’d normally see for a touring production. The design incorporates the geometric textures of the seventies and its gold and earth-toned color palette with the contrasting “on stage” world of bubble gum-colored performances by the performers in bright pinks, blue and purples. Several delightful costume transitions add a bit of surprise and a gentle Vermont snowfall brings a smile. Bruni balances it all and never loses sight of the tenderness within the story.

“When I hear a good song, I feel like someone understands me,” says a young Carole to explain why she wanted to become a songwriter. Listening to her music again and hearing her story in Beautiful, you’ll walk away feeling the same way about her. It’s no wonder she made the earth move with her music.

Eventually you’ll be able to see a film adaptation of the musical, which is in development by Tom Hanks’ production company and Sony Pictures, but it will be several years until it is completed. For now, do yourself a favor and see this heartwarming slice of pop culture heaven live at the Hollywood Pantages. You won’t be disappointed!

Get discount tickets via Goldstar.