What Kind of Candy Eater Are You? 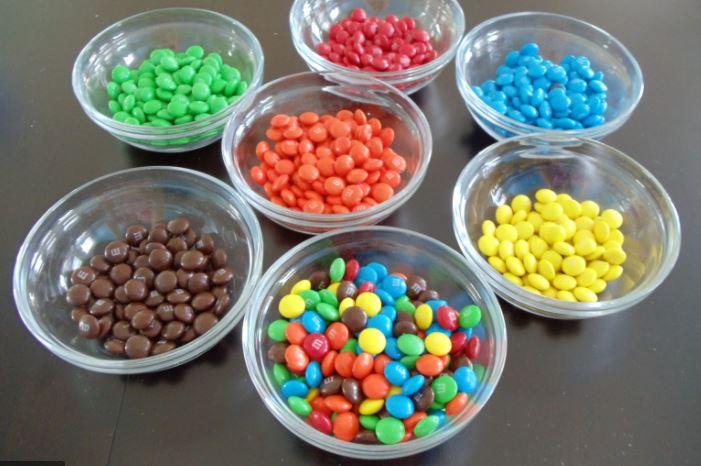 All three of my granddaughters would probably tell you the same thing. “Do not ask Nana for candy. She will not buy it for you because it has so much sugar in it that isn’t good for you.” Then they tend to put a hand across their mouths as if sharing a secret, “But she eats ice cream.”

It’s true. I don’t buy them candy. It seems to me if I buy them candy, then whenever we are in a store, they will remember to ask for it. All of which rather surprised me when I just happened to find an open bag of M&Ms in the cabinet above my oven, closed tightly with a rubber band that easily came off. I poured the about half-filled individual sized bag out onto a napkin and divided them by colors. That is the only way I have ever eaten M&Ms, according to their color.

Next step, I photographed my colorful candy selection and wrote a post, which received more responses than anything else I have ever written. It was amazing and rather confusing, yet kind of awesome. My post of multi-colored candies initiated lots of stories from readers about which candy they like best, why, and how they choose to eat them ( I never realized before how many people like their candy frozen)!

I also received one identical question over and over again: “Do you really separate your candy by colors before eating?” Yes, I do. If you eat them altogether in a handful, number one, there’s some doubt about how many eaten.  You also miss the nuance of different flavors between the multiple colors.

In order to authentically write this column, I removed the rubber band on another half-filled bag of M&Ms found behind a box of Green Tea in the cabinet which contained 2 brown,  5 red and 5 blue, 6 green, 11 yellow, and 13 orange. I was very surprised and sorry to see only 2 brown M&Ms.

Brown is the most distinctive taste for sure. I was kind of sorry that I went from least to most because only red, blue, green, yellow, and orange were left. Brown is the best flavor for sure.  I don’t think I’ve ever eaten brown first, but now I’m sure it’s the best one out of all of the colors. The issue might be that after eating multiple colors, it is difficult to decipher which is more distinctive than the rest.

Do you know where the name M&M came from? Bruce Murrie was Hershey’s president’s son and it was Forrest Mars’ idea to make a small, round chocolate-centered candy in a shell. The rest is history. Each bite-size candy has about 3 ½ calories. A serving size, according to the internet is “1 oz, 28g or about 32 pieces. One fun-size pack has around 73 calories, 2.6 grams of fat and 9.6 grams of sugar.” Hmmm.