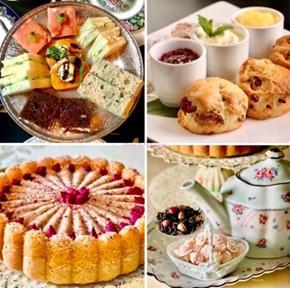 Over the past one hundred and eighty plus years, Afternoon tea has taken on many different incarnations.  While the original traditions of the day were born of the rules of a regimented English aristocracy, the evolving popularity of the afternoon tea genre has allowed for people of all backgrounds to partake in the rituals of tea, in one form or another.

The foundations for each tea ritual may be updated and adapted to fit the needs of a modern hostess. As to not be redundant, each menu below includes the service of hot, loose leaf decanted tea, unless otherwise noted.

AFTERNOON TEA or LOW TEA:  A traditional afternoon tea is served between 3 PM and 5 PM at a low table. The menu consists of three courses-assorted crustless finger sandwiches and savories, scones with Devonshire {clotted} cream and preserves and assorted finger sweets and petit fours. It is not uncommon for a trifle or dessert to be added as a fourth course.  The order in which the foods are presented on a three-tier stand are the Top Tier ~ scones, Middle Tier ~sandwiches and savories, Bottom ~ Sweets.  The order in which the foods are consumed are the sandwiches and the savories followed by the scones, then sweets.

ROYAL TEA:  The same as an Afternoon tea with the addition of a glass of Champagne or Sherry.

INFORMAL AFTERNOON TEA:  Served in a salon or outdoor setting, with either placement seating or casual seating at low tables. Candles are never used.

FORMAL TEA/RECEPTION TEA:  Service is set buffet style, on white linens, in the dining room. All foods must be easy to consume without utensils.  Guests are not formally seated but encouraged to mingle throughout reception rooms while standing. Candles may be used after 5 PM, with the curtains drawn.

LIGHT TEA:  The same as an Afternoon tea, however, one would exclude the assorted sandwiches and savories.

CREAM TEA:  Known to the southern parts of England as a light repast or to us Americans as a snack, served in the midafternoon consisting only of scones, Devonshire cream and preserves.

STRAWBERRY TEA:  Traditionally served during the spring and summer, either in the early morning or midafternoon. Fresh strawberries, whole or sliced, with Devonshire cream and castor sugar {granulated, brown or confectionery}.

HIGH TEA:  A high tea is served in the late afternoon or early evening {5 PM to 7 PM} taking the place of dinner. Served at a “high” table with seated place settings. The foods are heartier and consist of salads, one or two hot dishes, pot pies, cold chicken, sliced meats, cakes, fruit tarts, custards and fresh fruits. The tea may be served hot or iced. The addition of any supper dish would be appropriate. Note ~ a high tea is never to be confused with an afternoon tea.  The terms and meaning are not interchangeable.

PLOUGHMAN’S LUNCH or FARMER’S TEA:  Originating in the pubs of England during the Industrial Revolution, a working-class lunch, served between noon and 2 PM. The menu including meat pies, assorted cheeses and fruits on crusty breads is similar to that of a high tea.

NURSERY TEA:  It was customary during the Edwardian era for the upper-middle classes to hire Nannies to raise their children. Parents did not share in the daily routines of their children’s upbringing. One of the rare times of day that children did interact with their parents was in the midafternoon in the nursery. Nursery teas were not elaborate, but menus of simple sandwiches with the crusts on, boiled eggs on sliced toast, bread with jam and on special occasions puddings, jam tarts and sweet buns. Tea was, in fact, not served. Milk was the chosen beverage for the children with the occasional lemonade.

TE DANSANT or TEA DANCES:  As the La Bell Époque was coming to an end in 1914, prior to World War I, women of leisure and men of prominence would converge between 5 PM and 6:30 PM in one of the Grand Hotels for tea and dancing. The fashions were as elaborate as the music was inspiring; from Ragtime and the Tango to the Charleston, on introduction, each new dance became all the rage. Special China of white porcelain with a gold border was created to celebrate the popularity of the Tango teas.  In 1939, with the advent of World War II, as the men went off to war and the women went to work the tea dance fell by the wayside.

SPORTING TEAS:  Following a hunt, a game of tennis, a croquet match or a day on the water, due to the outdoor aspect of these teas, iced tea was the usual preferred choice, but not mandatory.  The menu would be similar to picnic foods if served in a casual setting but may also be elaborate if one is so inclined to serve in a more formal manner.

BRIDGE TEAS:  Card games have always been a catalyst for entertaining.  Custom dictated that the bridge games began at 1 PM with tea following at 3 PM.  Whether one serves a casual or elaborate tea will be at the discretion of the hostess.

WEDDING TEAS:  Teas, both formal and informal, have been held in the celebration of engagements, showers, meet the in-laws, out of town guests, the actual wedding and the day- after the wedding.  In the Southern part of the United States, it is not uncommon for newlyweds to hold a tea for those who could not attend the wedding.

AFTERNOON TEA STYLE LUNCHEON:  Teatime has come full circle to combine the best of all worlds.  Working women no longer have to forsake afternoon tea due to time constraints, for many establishments, as I introduced at the Plaza Hotel in NYC in the 1990s, have wisely chosen to include afternoon tea menus during the luncheon hours of noon to 2:30 PM.

Whether you use your own favorite pound cake recipe or a mix, pistachio~ cardamom pound cake is a savory twist for an afternoon tea delight. Ellen Easton 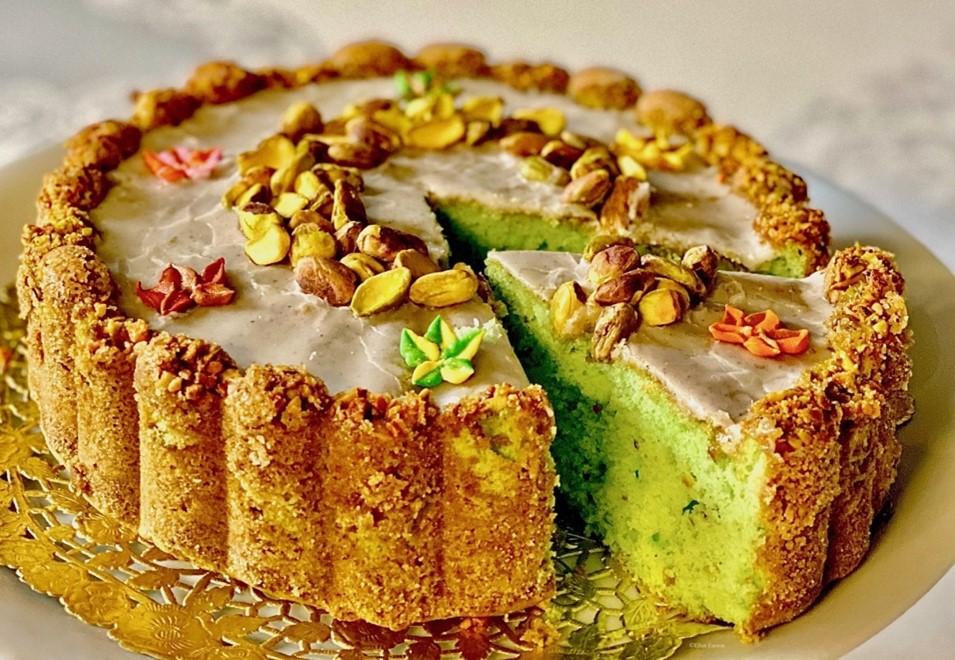 PREPARATION: Pre-heat oven to 350 degrees Fahrenheit. Spray the bottom and sides of the pan with PAM™ Baking Spray, dust the same with Domino Light Brown Granulated Sugar and ground pistachio nuts. Prepare cake batter and add ground pistachio nuts, ground cardamom, one drop of green food coloring and extracts. Beat in a mixer until blended together.  Baking time ~Follow the instructions in your recipe.   When a toothpick inserted and removed into the center of the cake is clean the cake is ready to remove to a wire rack to cool. Allow to cool for 10 to 15 minutes.  Turn out onto the wire rack.  Pour the sugar glaze on top. Garnish with pistachios. 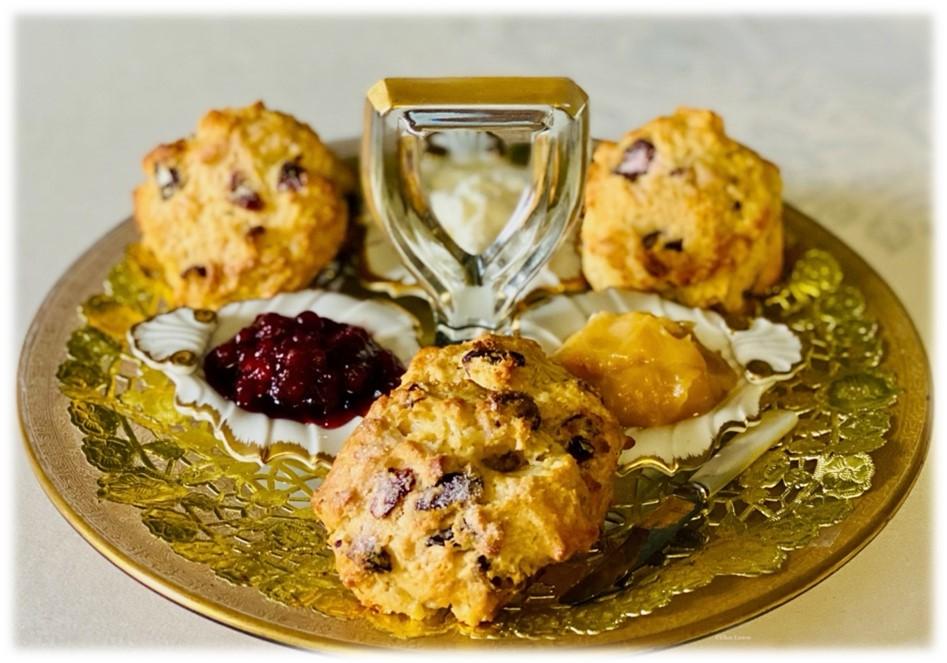 Scone Wash: 1/2 cup half and half cream (for brushing top of scones) Cinnamon Sugar: 1/4 cup granulated sugar, 1 or 2 tablespoons ground cinnamon, to taste. In a small bowl, mix together the sugar and cinnamon. If more Cinnamon/Sugar is needed, repeat if needed.

Preparation: Preheat oven to 350 degrees F. In a large bowl, combine flour, sugar, baking powder, and salt together. With a pastry blender or sharp knife, cut the cold butter into flour mixture. Fold in cranberry raisins to the flour mixture. Add half and half cream and vanilla extract to the mixture and blend until dough forms. DO NOT over mix the dough.

With floured hands, pat dough to a 1-inch thickness onto a floured board. With a floured cutter of your desired shape, cut out and place 1-inch apart on a parchment paper lined or a lightly greased and floured baking sheet. Lightly brush the top of the scones a little of the half and half Scone Wash Cream. Sprinkle some cinnamon- sugar on top of each scone to taste. Bake 20 to 25 minutes until lightly golden brown. Baking time will vary according to the size of your scone. Scones are best served warm. Yields: 24 scones.

Excerpt from A TEA PARTY PLANNER