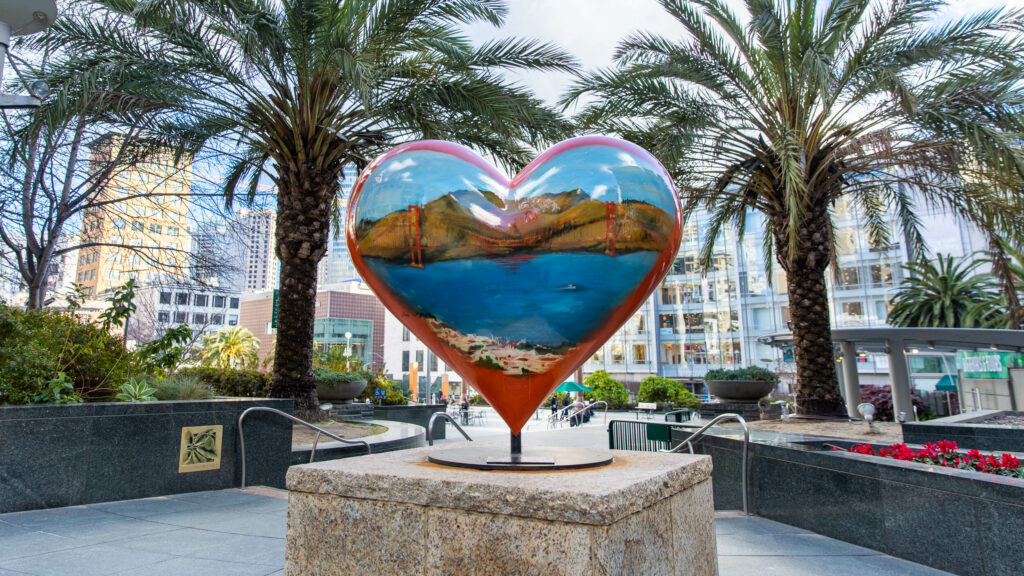 The heart sculptures in SF are almost as Iconic now as Tony Bennett’s singing.  View the new ones and perhaps enjoy the benefit for Zuckerberg Hospital. Theatre is thriving, especially at our lesser-known venues and we have a small round up to keep you entertained. The Noir Film fest is back, and the Fog Design and Art Show brings a feast for your eyes this week. And it’s almost Chinese New Year. Start it off by signing up for our Feng Shui masterclass series on what the year of the rabbit will bring. 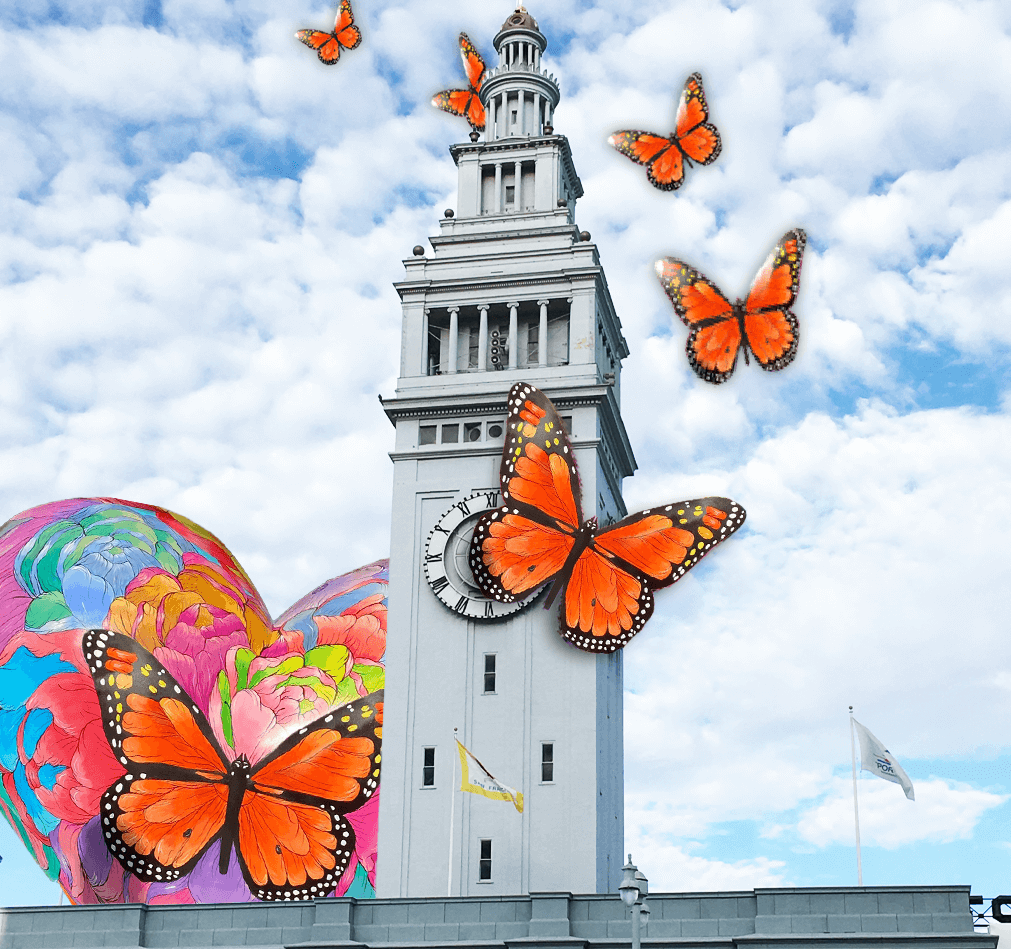 An exclusive preview of the hearts will be on display at the Ferry Building beginning on January 25th. This year, 24 of the 35(!) new sculptures will be on display for the month of February before being auctioned at HEARTS AFTER DARK, each raising critical funds for the Zuckerberg San Francisco General Hospital and Trauma Center.

At the event on February 9th, you can meet the artists, dine, and dance the night away all for this great cause. All the ‘heartworks’ are privately owned, and some are easily discovered in locations, such as lobbies and storefronts, others are at the homes of private individuals. For a map of all of them check out the website. 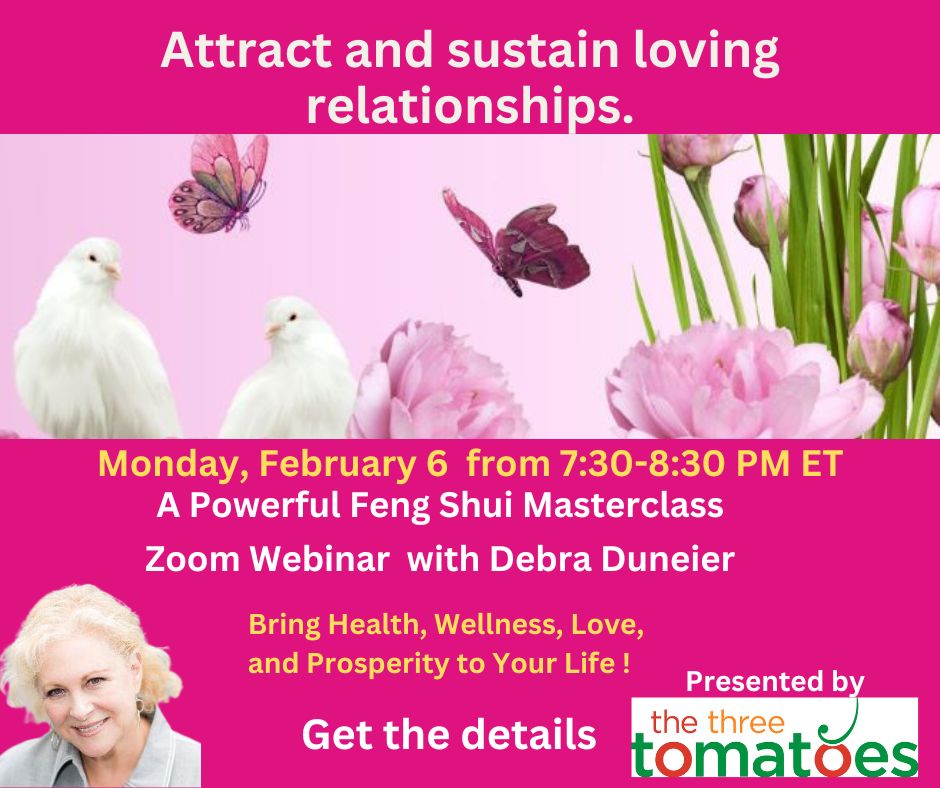 This will be an amazing session with Debra Duneier. And by the way, if you missed the first session on “Harnessing the Year of the Rabbit,” it was fabulous. We learned what our animal signs are based on the year you were born, and forecasts of how your animal sign will play out this year with the Rabbit. Plus we learned tips for starting the year off with new energy. (Note: The video recording of the first session is now available. Get the details.

We tomatoes love our theatre and certainly enjoy the big Broadway productions, but it is always a treat to explore new works, or undiscovered theatrical adventures at some of our lesser-known locations. Here are four shows to add to your must see list. 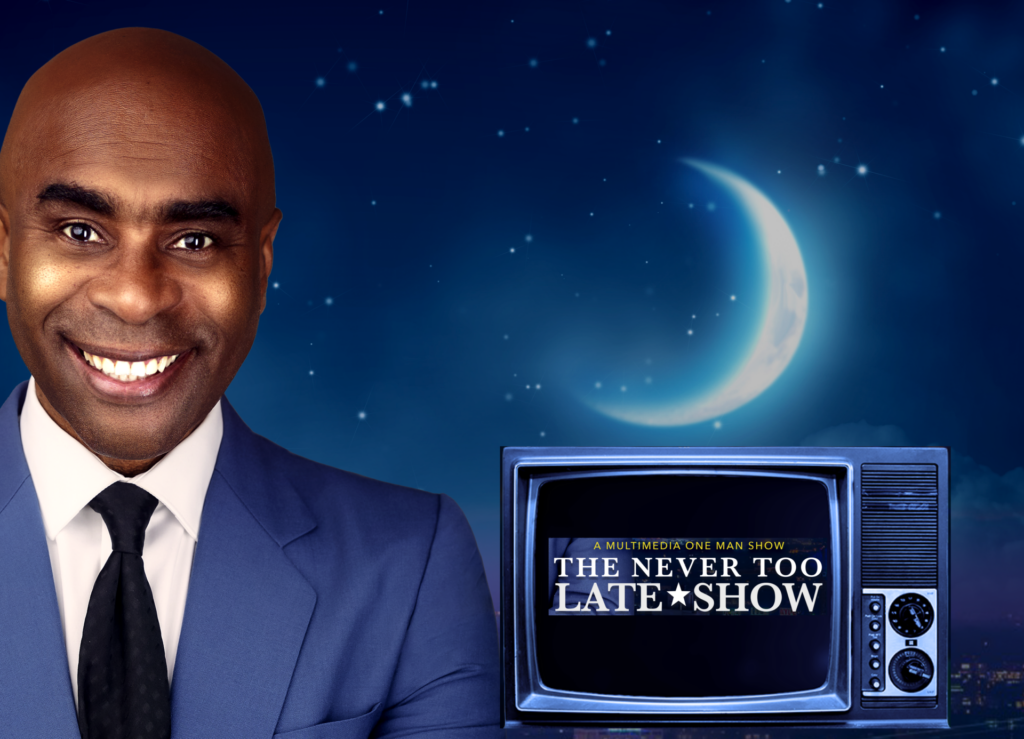 After four weeks of sold-out preview shows, The Never Too Late Show takes center stage at The Marsh Berkeley. Don Reed presents an inspiring comic tale about never giving up. Both hilarious and heartbreaking, it chronicles his travails and perseverance through the Hollywood gauntlet to Late Night TV. This will be a multimedia presentation featuring classic footage and graphics from various entities: The Tonight Show starring Johnny Carson, HBO, FilmMagic, The National Comedy Center, and much more.  8:30pm Saturdays and 7pm Sundays, through February 19th (except Jan. 28).  Berkeley Cabaret and themarsh.org

Also, in Berkeley showing at the PEET’S theatre at the Rep is CLYDE’S. Lynn Nottage’s delicious drama-comedy follows formerly incarcerated folks looking to start their lives over at a truck-stop diner under a tough-as-nails boss and a mysterious chef in pursuit of the perfect sandwich. A buoyant play full of witty dialogue, Clyde’s is a transcendent story about people rising above their past mistakes and reconnecting with the world. Runs through February 26th. https://www.berkeleyrep.org/shows/clyde-s/

Particularly relevant to the bay area, The Mountain View Center for Performing Arts brings a laugh out loud event to the second stage February 24th. A group of former tech workers formed a fearless band of renegade tech comedians. They roam from town to town, roasting whimpering techies in front of live crowds. We all know someone who is a “techie”, I mean we are near or in Silicon Valley. So, bring your tech loving or hating friends to this 90 minutes long gut busting show. Get tickets. 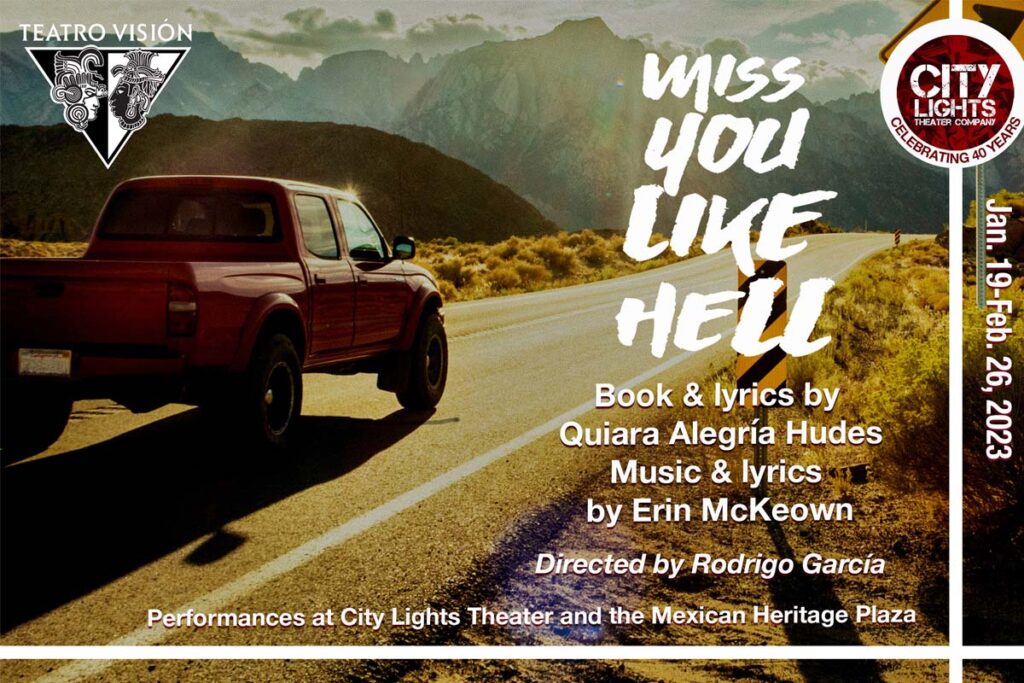 There is a brand new musical at City Lights in San Jose, MISS YOU LIKE HELL. A mother and daughter take an epic road trip. When Beatriz shows up at her teen daughter Olivia’s house at 4 a.m. and invites her on an epic road trip, they haven’t seen each other in four years. But Beatriz is an undocumented immigrant about to be deported to Mexico, and time is running out. From Philadelphia to California, Beatriz and Olivia take a transformative journey, meeting an array of Americans with their own stories to tell. Important and intimate new musical rich with family, humor, and heart. Real-life mom and daughter play the heart opening duo. Richly nuanced with tears and laughter playing now through February 26th. https://cltc.org/ 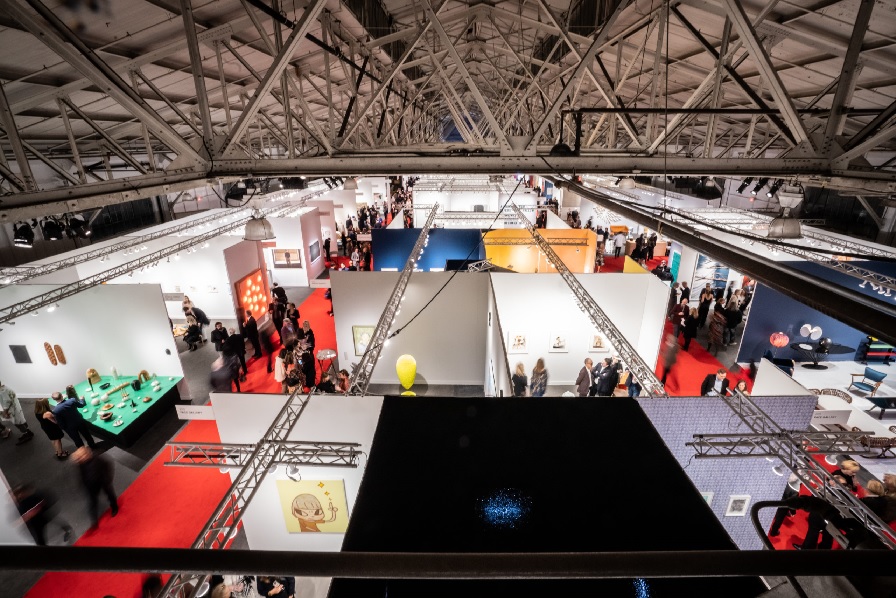 45 galleries of art and design await you at in Fort Mason. Celebrating today’s most significant creatives and leading contributors to the worlds of design and visual arts, the fair assembles prominent 20th-century and contemporary design dealers and a weekend of exciting programs. The fair is synonymous with a uniquely pioneering spirit due to its bold hybrid approach and intimate presentation of art and design, dynamic programming on-site and its community-led mission to champion art and design.FOG represents a key moment in which the local and global community congregate to engage in critical dialogue, artistic exchanges, and a shared passion for creative pursuits.  fogfair.com 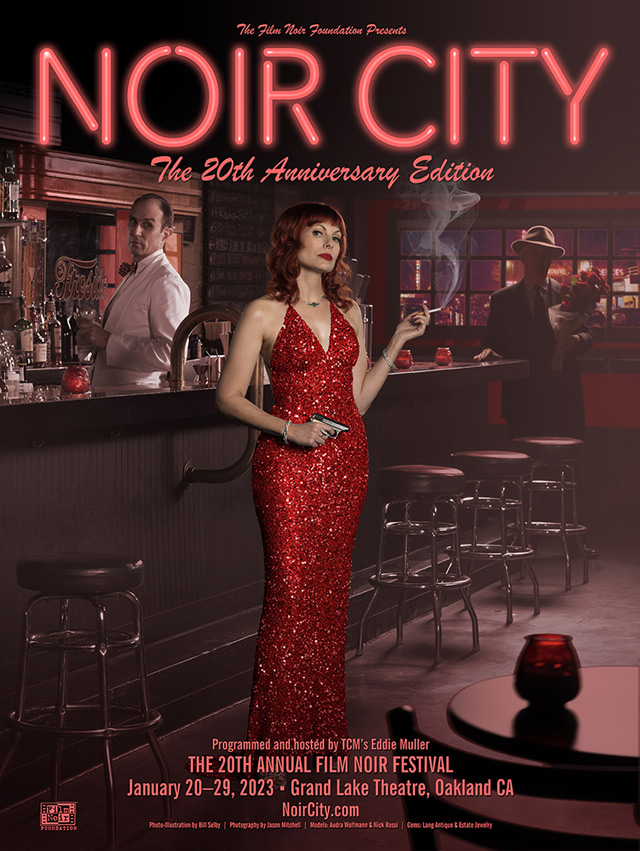 See things in black and white at the. The fest is celebrating its 20th anniversary in a new home at Oakland’s Grand Lake Theatre. They will be showing 24 films from Hollywood’s noir movement over the course of 10 days. Every film on the schedule is celebrating its 75th anniversary, with several of the movies having never been screened at NOIR CITY. Join Film Noir Foundation founder and Turner Classic Movies host Eddie Muller and a slew of special guests for a swanky, sexy, and sinister excursion back in time. Friday through January 29. Curl your hair, grab that red lipstick and get ready to channel your inner Lana Turner.  noircity.com

Tags: SF Lifethings to do in SF