We’ve all had the occasional cold, leaving us miserable as we try to breathe through a stuffy nose. But for nearly 40 million Americans, these blocked nasal passages may be a sign of sinusitis.

Are My Sinuses Anyway?

Your sinuses are air pockets that are located within the bones of the skull and face. They are connected to your nasal passages by small tubes or channels. These channels allow air to flow from the nose into the sinuses and mucus to drain from each sinus into the nose.

Sinusitis is actually one of the most common health complaints. It results in many missed days at work and can greatly impact one’s quality of life — even eventually taking away someone’s ability to smell. Interestingly, women are more prone to sinusitis than men, according to the Centers for Disease Control and  revention.

Dr. Joseph Jacobs, a pre-eminent expert in the evaluation or nasal and sinus disorders at the NYU Langone Medical Center weighs in on sinusitis, its causes, treatment and the value of a proper diagnosis.

What exactly is Sinusitis?

Very simply, it is irritation, swelling or inflammation in your nasal passages that can block your sinus spaces.

Your nose and sinus tissue produce mucus every minute of the day. In fact, each of us produces about two quarts of such secretions each day. When you are healthy, that mucus is expelled or moved to the back of the nose and you swallow it; you’re not really aware it’s happening. However, when you get swelling that lingers for a number of days, you can then get an accumulation of mucus. The mucus becomes increasingly thick; it’s gloppy like honey and it can stick to the tissue so you really feel it when you swallow. Over time, this build up doesn’t allow the sinuses to drain properly and bacteria can get trapped leading to infection (called bacterial sinusitis).

What to Watch For

Some of the common signs and symptoms of sinusitis include: 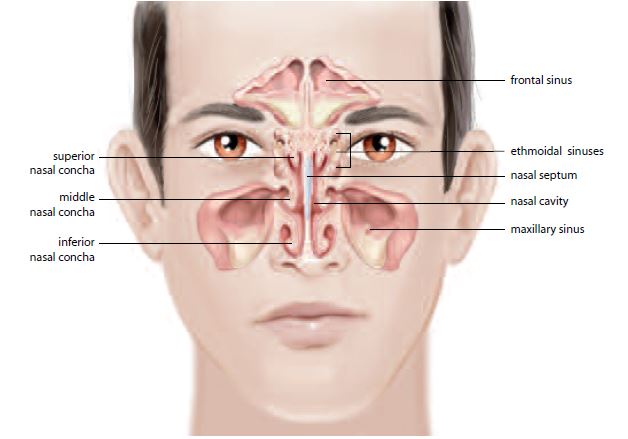 It often starts with a cold or respiratory infection of some kind. A cold that lasts beyond the typical five to seven days, for example, puts a person at risk for sinusitis as blockages linger and further irritate the inner lining of the nose and sinuses.

Structural problems in the nose and sinuses are also a common inciting factor. For example, a deviated septum can cause a narrowing of a passageway making chronic sinusitis more likely.

There are many other and less common structural narrowings that can create blockages as well. The lining tissue inside the nose can also become inflamed and swollen due to allergies — everything from dust and mold to your typical springtime allergies — and through exposure to chemicals or some kind of toxic products. People with certain types of medical problems, tumors or inflammatory diseases such as colitis, may be more prone to sinusitis, as are people with previous nasal and facial trauma or injury.

Most sinus infections are caused by a virus. Other causes may include:

Why do women suffer differently?

It’s hormonal. Women’s nasal function changes with their menstrual cycles and during pregnancy. In fact some pregnant women have a bad stuffy nose throughout their pregnancy.

Women also tend to get worse symptoms, more stuffiness and a greater number of nosebleeds.

When would you suggest someone see a doctor?

If they are getting recurring problems – for example, colds every month or two, chronic persistent dripping from their nose or draining trouble – they should go to the doctor, preferably a doctor who specializes in treating the Ear, Nose and Throat, an Otolaryngologist. They should also be seen if symptoms persist in the nose and sinus area for more than three to four weeks with or without treatment.

Lots of diagnoses for sinusitis are made by walk-in clinics or general practitioners and some are misdiagnosed.

For example, it may be decided, based on a report of symptoms that the person has an allergy, and lots of people will test positive for allergies. But, while people with allergies are more prone to sinusitis, it doesn’t mean that’s the cause of their nasal problems. In many cases, they either have a structural problem, such as a deviated septum, or they have polyps in their nose So, it’s really important that a specialist look inside the nose with a telescope to see if there is swelling or pus or other problems.

The challenge is that many people are not as motivated to get help for their noses as they are with chest pains or if they notice changes in their vision. But the effectiveness of any treatment will depend on how early a proper diagnosis is made and some kind of intervention is taken, regardless of whether it’s medication or surgery. In addition, chronic sinus problems and respiratory problems are often closely linked, including the chest because those airways are connected and there’s that potential of developing chronic bronchitis or asthma-related problems, which can be very serious.

Bottom line: it’s very important to get a proper exam and diagnosis so that we provide a correct diagnosis and treat the symptoms correctly.

There are a number of new nasal sprays; some with Cortisone or prednisone as an active ingredient to reduce inflammation. There are also saline-based products to irrigate inside the nose with or without various medications added to treat the inflammation of the membrane. Antihistamines are also available now added to nasal sprays. Antibiotics are still used for bacterial sinusitis.

Various home and non-medication measures can help treat the symptoms of sinusitis. These include overthe-counter nasal saline washes, which irrigate or clean out mucous. These are available in spray bottles of various sizes, as well as Netti pots that are a bit more work but are effective.

The end result of these products is to improve breathing and clear out the mucous. Other remedies include steam such as showers and vaporizers, spicy food and tea with honey.

How has the approach to treating sinusitis changed over the years?

Back in the early 1900s, the most common cause of death was sinusitis and ear infections that, when untreated, could extend to the brain and cause meningitis or brain abscess.

Sinus surgery was primitive, disfiguring and invasive at the time. It wasn’t performed to make a patient’s quality of life better or improve their breathing so they slept better as is often the case today; it was really done to prevent life-threatening complications.

Even 20 to 25 years ago, surgeons would perform sinus surgery by shining what looked like a coal miner’s headlight inside a patient’s nose or the mouth. Under relatively poor visualization (compared to today’s standards), the sinus was opened to clean out any inflamed tissue or polyps. There was a lot of cutting, tearing and pulling. Patients endured lengthy anesthesia and had a fair amount of swelling and discomfort afterward. They were sometimes in the hospital for a couple of days with a fair amount of bleeding and draining at the surgical site. Lots of people got better, lots of people didn’t.

All-in-all it was a terribly unpleasant procedure for both the surgeon and for the patient.

How are these procedures done today?

Today, they are performed overwhelmingly just in the nasal cavities. A tiny camera is attached to an endoscope or telescope which provides high-intensity, harmless illumination.

The inside of the nose is seen very clearly on a high definition TV screen. Surgical procedures are also guided by CAT scan imaging, giving surgeons real-time pictures of the anatomy and where and how to move the instrument inside the nose.

Removal of tissue and bone is minimal and the goal of the surgery is to create more permanent and adequate drainage.

These are now outpatient procedures with minimal anesthesia. People are not nearly as groggy. They’re not packed afterwards, there’s very little bleeding and they’re back to work in a day or two.

What typically prompts people to get sinus surgery?

If you don’t have a tumor, the need for surgery really depends on quality of life issues. Some people just don’t want to have surgery. Others — about 10-15 percent of patients — may elect to have the procedure to feel better. This is often the case for people who day after day can no longer breathe out of either side of their nose, have lost their sense of smell, miss a lot of work or school, get bad headaches, have a constant dry mouth, aren’t sleeping well and generally feel terrible.

Are there steps people can take at home?

Most of what people do at home won’t necessarily reduce the episodes as much as they reduce the symptoms.

Naturally, what people care about is how they feel and how they’re breathing.

Afrin or the over-the-counter nose sprays can be used for a few days to relieve the symptoms of a cold. As mentioned, I often suggest people wash their nose out once a day with a nasal wash or saline spray to try to prevent pooling of mucus and secretions; these are highly effective to clean the nasal passageways and help somebody feel better. You just need to be sure to use sterile/distilled or boiled water, follow the manufacturer’s direction and clean the bottles routinely. That’s because the tips will often become contaminated with bacteria from the nose.

Humidifiers and air purification systems can be used, but it can involve a lot of time and effort.

Obviously, for people who have allergies or reactions to things in the environment, it’s a matter of getting tested and then trying to avoid the specific allergen.

Again, I would strongly urge anyone who thinks they might have sinusitis to see a specialist because using some of these home remedies, such as washing the nose or spraying the nose or drinking certain kinds of wine even can cause a lot of nasal congestion and clogging and make sinusitis worse. If you have more than 4-5 episodes of what seems like a “cold” or “allergy” in one year, there may be something else going on inside the nose. Certainly, if the cause of sinusitis is structural, there’s less you can do at home to avoid problems or to avoid annoying symptom.

What about getting relief in the winter months?

Nearly everyone wakes up with a stuffy nose this time of year. It’s dry and when we lie flat the nasal tissues get more congested. Once we are upright, the fluid drains out of the nose and tends to redistribute. So a stuffy nose is very common in the morning. Certainly, a dry nose can cause more nasal stuffiness because the membranes get dry and the mucus gets very thick. I apply moisturizing cream just inside my nose, which can be helpful at night. Most people are very surprised to learn they can put cream in their nose, but it works the same as it does if you put it on your skin.

Dr. Joseph Jacobs is a full Professor at New York University/ Langone Medical Center and the Director of Rhinology in the Department of Otolaryngology. He is Past President of the American Rhinologic Society and has published extensively within the field of Rhinology, nasal and sinus disease and is considered a leading expert in Sinusitis, Sinus Surgery, and Minimally Invasive Rhinology. For further information, go to www.josephbjacobs.com or call (646) 754-1203.