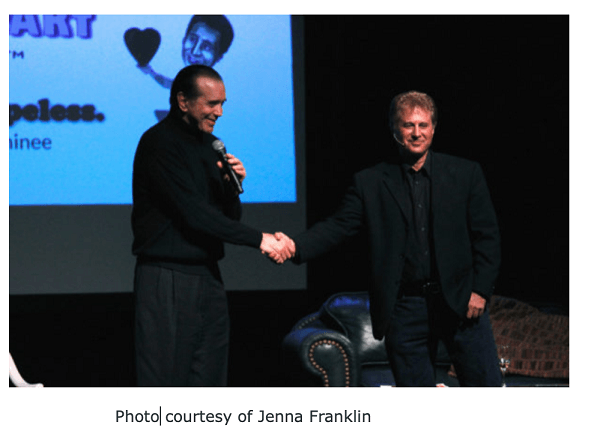 Sometimes, life has a certain rhythm to it. A kind of balance that can make for a full circle moment.

It was 1990 and Chazz had written a one man show about his colorful life growing up in the Bronx. He performed the play, and movie industry royalty Robert De Niro happened to see a performance. De Niro was wowed by it and declared to Chazz that he wanted to direct the piece and bring it to the next level.

A Bronx Tale, the film was born, followed years later by a Broadway musical based on his story.

Cut to several decades later when comedian, actor and writer Peter Fogel was performing his one man show, Till Death Do Us Part, You First! at a Florida theatre.

A comical show about life as an eternal bachelor, the audience response was quite enthusiastic. That alone would make any writer/performer extremely happy. But Peter soon discovered that Chazz Palminteri was in the audience that night. Just like De Niro’s response to his play, Chazz offered up kudos to Peter, and said he wanted to direct it.

See what I mean about a full circle moment?

This play is based on Peter Fogel’s own life, and his significant commitment issues, as well as a breakup that caused him to consider his own mortality. In Till Death Do Us Part, You First!, Fogel is visited by a special guest who gets into Fogel’s head and acts as his conscience (Chazz Palminteri in a voice-over). Throughout the story, Palminteri mentors Fogel on how he can end all his romantic disasters and reconnect with the one woman who can change his life.

When asked why he chose to get involved with this play, Chazz explained, “I get asked to direct solo shows all the time. Honestly, I don’t have the time… but Peter’s show jumped out at me; it’s hysterical with lots of heart — and the story really resonates with audiences.”

You can see this collaboration between Palminteri and Fogel at the Triad Theatre, Friday Nov. 11 and Saturday Nov. 12. Three performances of Till Death Do Us Part, You First! will be presented. www.tildeathdousparttheplay.com