NYC LIFE: Recollections of 9/11 on the 20th Anniversary 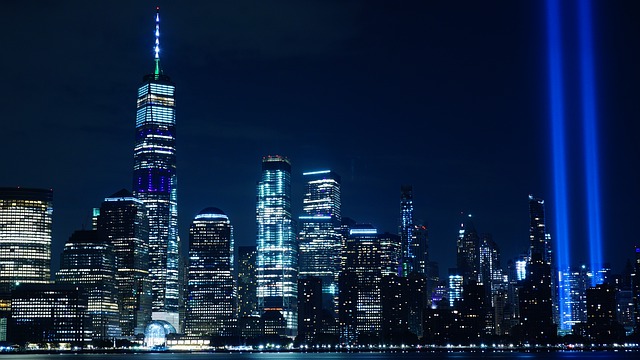 It did not seem right on this day, the twentieth anniversary of 9/11, to have our regular New York City events newsletter. This is a day to pause and reflect, as we do every year. The moments of silence when each plane hit and the reading of the names of those who never got home that day, is as poignant to hear today as it was the first year.  As we commemorate this twentieth anniversary, the memories come rushing back, especially for those of us who were in New York City on that fateful day. It is a day that none of us will ever forget.

Over the years, when asked what it was like being in New York City that day, I have talked about it. But I have never written about it publicly before. I think just about everyone in the New York metro area knew someone who perished that day. I knew a few people too, but they weren’t close friends or family.

So, I always felt my experience paled in comparison to the families who lost dear loved ones, the stories of those who made their way out of the towers, and all the brave first responders. But we must never forget, and our stories must be told for future generations. My grandchildren were not even born then, and while they know of the horrific events of 9/11, it’s important that they hear the stories from those of us who were in New York City that day. This is my story.

On September 11, 2001, my husband and I were living and working in Murray Hill in the heart of New York City’s midtown. I remember the events like it was yesterday.

I was in the bedroom getting ready to leave for work with the Today Show on in the background, when I heard Katie Couric say to Matt Lauer that a plane had just hit one of the Twin Towers. I immediately ran into the den to tell my husband to quickly turn on the TV.  First reports were that it was a small plane, so everyone was thinking it was an accident. And then we watched on live TV, as the second plane hit, and that’s when we all knew this was a terrorist attack.  We immediately ran up to the rooftop terrace of our building and looked south, where we saw the huge plume of rising smoke against the backdrop of a beautiful cloudless blue sky on what had started as a perfect fall day. Even now, perfect fall days and blue skies are twinged with the memories of that day.

We went back to our apartment, and I grabbed my handbag and started for the door. When my husband asked me where I was going, I said to work. (My office was only about 10 blocks away.) He insisted that I stay, but I wouldn’t listen. I think like everyone I was in shock, and just felt I needed my normal routine and then maybe this wouldn’t be real. There was no stopping me.

As I started to walk down Park Avenue, people were coming out of subways and taxi cabs and just finding out what had happened. We were all in shock. People were trying to call family and friends but none of the cell phones work.

I walked into my office as everyone was arriving. Some had just found out what had happened. We gathered in the conference room with the TV on and that’s where we watched the horror of people jumping and then the first tower fell. There were audible gasps. By then the city had gone into lockdown mode, and there was no way for people who lived outside of Manhattan to leave. We were shutting down the offices but all of us in management first made sure that anyone in our groups had somewhere to go.

I then made my way back up Park Avenue with throngs of other walkers trying to comprehend the incomprehensible.  Shortly after I returned to the apartment, my daughter, who worked nearby showed up with about eight other people from her office. We ordered food, which hardly anyone ate, while glued to the TV as the situation unfolded. By then we could hear sirens, helicopters, and jet fighter planes flying overhead.  Would there be more targets in NYC? It was a frightening time.

By late afternoon they allowed the trains to start running again and opened the bridges and the tunnel so people could return home.  Our daughter lives on Long Island, and while we wanted her to stay, she and her husband were closing on their first house the next day. So early that evening we walked her to Penn Station. It was surreal. There were no cars or taxis on the streets…just throngs of people in shock. We had never seen anything like it.

Later that night we took the dogs out for their nightly walk. There were still people covered in dust who had walked all day from downtown and were heading to Grand Central Terminal. There was an eerie silence. But there was one image that is seared in my mind. There was a lone firefighter, in all his gear, covered in ashes and dust, and I will never, ever forget the look on his face that showed his unimaginable pain and grief. 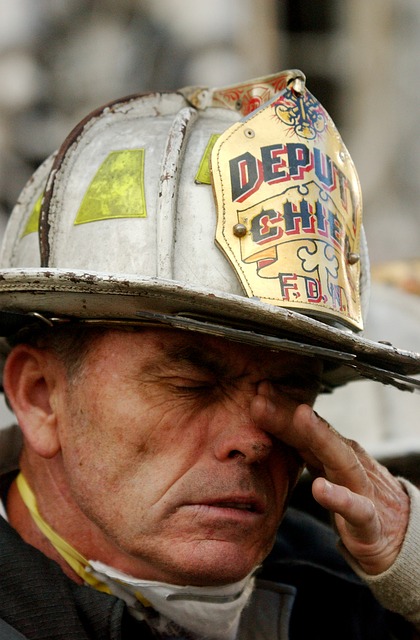 Image by David Mark from Pixabay

That night we had to close the windows, because you could smell the acrid smoke, and it stayed in the air for many weeks. It’s a smell you don’t forget. We didn’t sleep much that night with the disconcerting sounds of sirens, helicopters, and jet fighters.

The next day we took our two dogs and met friends with their dogs at Madison Square Park. There were many others there with their pets. I think we all just needed to feel a little normalcy and watching the dogs run and play was a much-needed distraction.

By the third day, we knew we had to get out of the city. Fortunately, we have a home on Long Island where we retreated. And then that weekend we visited friends in Vermont, where life still seemed normal, and we felt some of the stress dissipate. But I have to say, like so many others, I had nightmares for weeks.

The following week we returned to the city and back to our offices as businesses started to reopen again. One of the most difficult things in those early days was seeing posters everywhere of faces of people who never returned home that day. The enormity of it all was sinking in daily. The newspapers started featuring the stories of the people who had left their homes that morning and never returned. I think I read every single story.

Over the next few weeks, we saw the very best of humanity in New York City. In our collective grief and trauma, we had somehow all come together, and at times the city felt like one gigantic hug. People stopped and cheered firefighters on their trucks. I remember stopping to thank a group of firefighters on the street who had come in from Los Angeles to help with the search downtown. One night we were in a restaurant near the New York City office of the Governor, who at that time was Pataki. He walked into the restaurant, and in a moment of spontaneity everyone stood and applauded. It didn’t matter what your politics were.

The spirit and resiliency of New York rose to the occasion, and our mayor, Rudy Giuliani was the calming and strong leader we needed at that time. He wanted New York to get back, and Broadway was soon re-opened, and the first baseball games played in New York were a powerful moment that signaled we wouldn’t let terrorists win.

A platform was built over the gigantic footprints that once held the towers and became known as Ground Zero, where people could see the enormity themselves. My husband and I never went to see that. Many visitors who came to town made their way there, almost as if it were a tourist attraction. I have to say, that always bothered me. 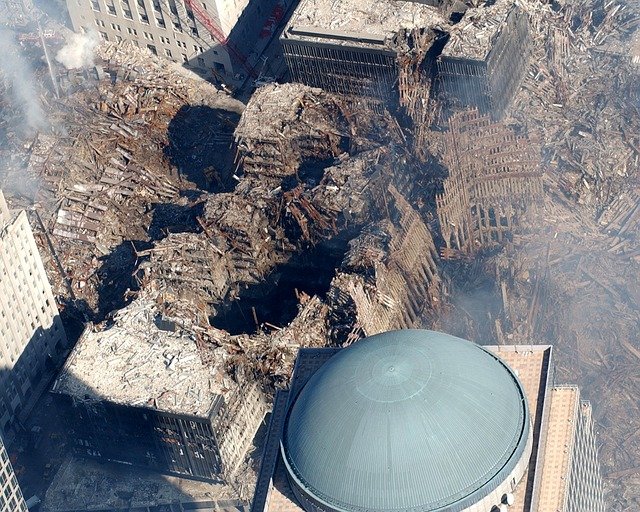 The first time I made a visit was when the memorial wall opened several years later. I knew it would be an emotional experience, but the depth of those emotions were unexpected.  Seeing all those names and discovering names of people you knew was overwhelming. I have been back several times and to this day, is still a somber, powerful experience.

It also took me a few years before I could bring myself to visit the 9/11 Memorial Museum. I have now been twice. It is an extraordinary memorial that captures the day and pays homage to every single person who died that day. But it’s a gut-wrenching experience and I’ve never been able to stay there too long. But I am glad it is there, so we never forgot the enormity of that time. 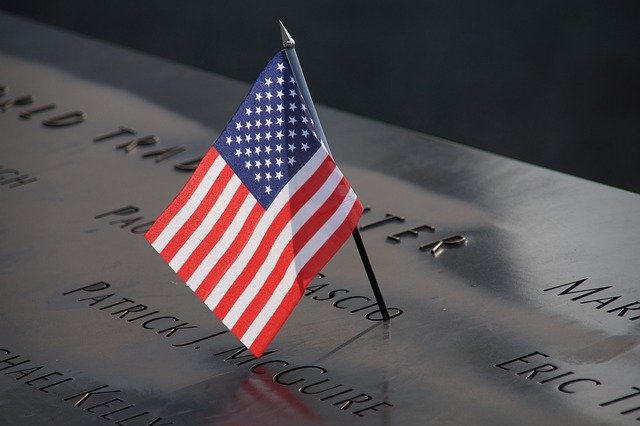 Image by Frank Nürnberger from Pixabay

The pandemic is the only other time that we have seen New York City brought to a halt. And once again, we have seen the loss of so many people, and our lives, once again changed forever. And we saw crowds cheering our front line workers again, this time nurses and doctors. But it’s certainly very different from the days and weeks after 9/11. While we continue to show our resilience, our sense of we’re all in this together, has sadly turned into contentious factions. And our rebound this time is taking much, much longer.

But we are New Yorkers…we come together when the going gets tough and we always rebuild. We will rebound but let us never, ever forgot.