New Shows on Broadway: The Crucible and Waitress

A chilling new version of The Crucible

Back for a limited run on Broadway, The Crucible is a mystical Arthur Miller piece that circles around hysteria and how people behave when confronted by a herd mentality.

Set in sparse surroundings in modern dress, this iconic drama focuses on a group of girls accused of being witches, led by Abigail, (Oscar nominee Saoirse Ronan making her Broadway debut)  a bad seed who leads a pack of girls doing  foolish and brazen things like dancing naked in the woods,  as young girls tend to do.

The Crucible takes place during the Salem Witch Trails, as scores of people are accused of consorting with the devil are put to death via hanging or stoning. A man of the cloth and a constable are on the hunt to cleanse the town, and in so doing take the innocents down. 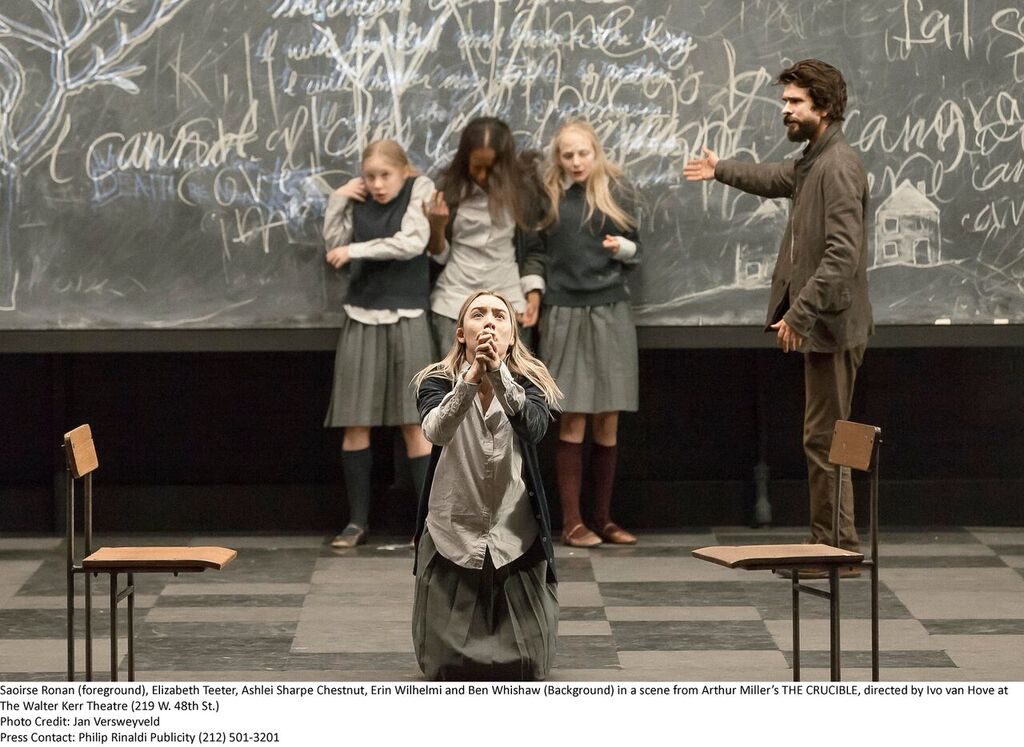 It is a long, dark and disquieting play. A  reminder  that there actually was such a thing as the Salem Witch hunt, followed centuries later by the figurative witch hunt that took place in the 1950’s during the McCarthy hearings. Sobering remnants of our American history.

The Crucible is chilling because of the action, and yet there are additional themes that are so uniquely human and everlasting. An affair between the young Abigail and the married John Proctor. Envy, longing, redemption.
John, although he strayed, is still the eternal believer in that which is right, and is really in love with his wife. He wants nothing more to do with Abigail. Yikes, revenge… This is the catalyst for why Abigail does the things she does. Selfish and headstrong, this girl is hell bent on “sticking to the story” and taking everyone down around her.

John’s wife recognizes their deep love and stands by him no matter what.
Their love story (despite it’s brutal ending) reminds us that love can survive all kinds of assaults, including the affair, and even the falsified charges of consorting with the devil. 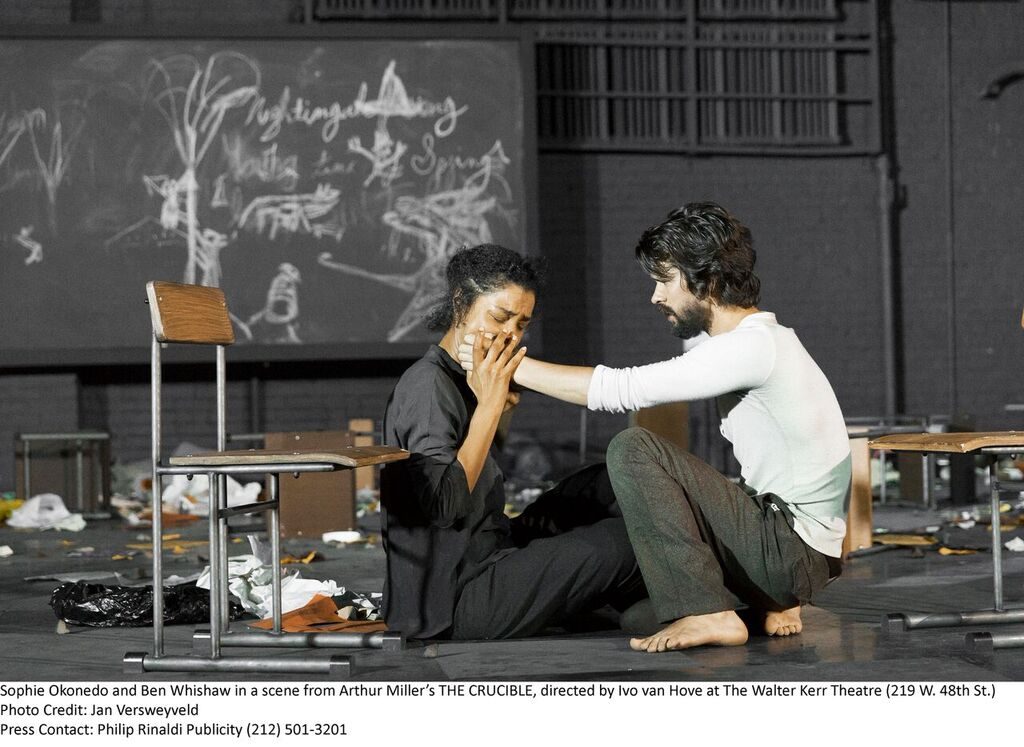 The performances in this Crucible are very strong. Ivo Van Hove directed yet another Arthur Miller piece (he helmed A View From the Bridge earlier this season, which I ardently disliked). Ivo has conventions he likes to use including ambient music.  In this case, Philip Glass composed the score.

Saoirse Ronan does a great job playing the young and nasty Abigail, the wonderful Sophie Okonedo is transcendent as the wife to John Proctor, played by a fabulous Ben Whishaw. Tavi Gevinson, the young actress who has already appeared to great acclaim several times on the New York stage, and veteran actor Jim Norton are excellent.
Ciaran Hinds is the dastardly Deputy Governor Danforth.

In addition to the endless music underscoring the intense drama, which was not necessary, the special effects were also un-necessary (levitation, and things blowing around.) But most curious to me was the  special effects make up that several characters sported,  indicating they had been tortured and terribly neglected in prison. The make-up was just absurdly exaggerated. It looked like a really bad high school cast, trying too hard.

Nevertheless, a worthwhile production to see.  The Crucible is a compelling revival of an important Arthur Miller play.

Serving up a great musical.

Switching gears from a witch hunt to a delicious journey…

Waitress beckons you into your seats with the intoxicating scent of baked goods, sensuous cinnamon and vanilla permeating the theatre. Oh my. What a way to begin a show. The scrim sports an image of  one huge lattice baked cherry pie top. If you haven’t had dessert before the show, you begin calculating just when you can get something sweet.

Hang on. Waitress provides just that.

As the show opens, the fabulous Jessie Mueller is supplied with ingredients to bake one of her famous pies. 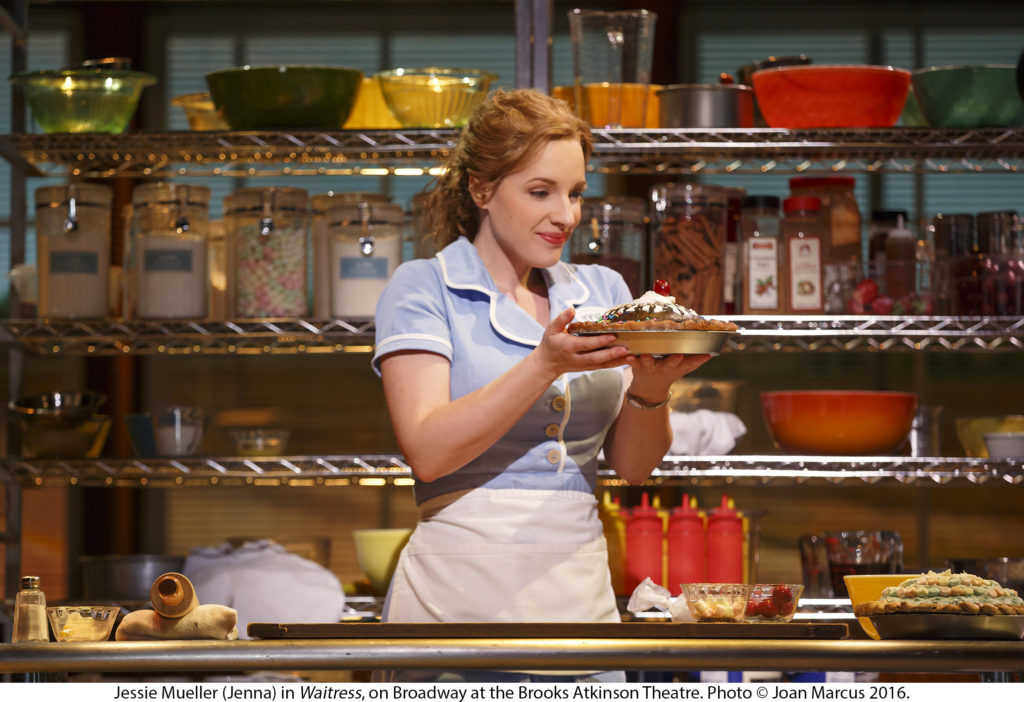 It may seem like a cream puff piece, but by the end of Waitress, you’ll feel moved, inspired and even empowered. With pop music by Sara Bareilles, book by Jessie Nelson, direction by Diane Paulus, choreography by Lorin Latarro, (based on the motion picture written by Adrienne Shelly), Waitress is making Broadway musical history with four women in the four top creative spots. Nadia DiGiallonardo is the musical supervisor and leads the orchestra.

And one of the themes of the show focuses on female friendship, as Jenna (the scrumptious Jessie Mueller) finds a creative outlet as a master pie baker, while she tries to navigate  a crappy dead-end marriage. Her two best friends at the diner are always on her side when they realize Jenna might just have a bun in the oven. Discovering she is pregnant, she attempts to make it work with her lousy husband until she meets the town’s new obstetrician, with whom she falls in love. The feeling is reciprocal for him and they embark on a relationship. Jenna’s girlfriends, back at Joe’s Pie Diner where she is the resident pie maker, also find passion and love in the most unlikely places. 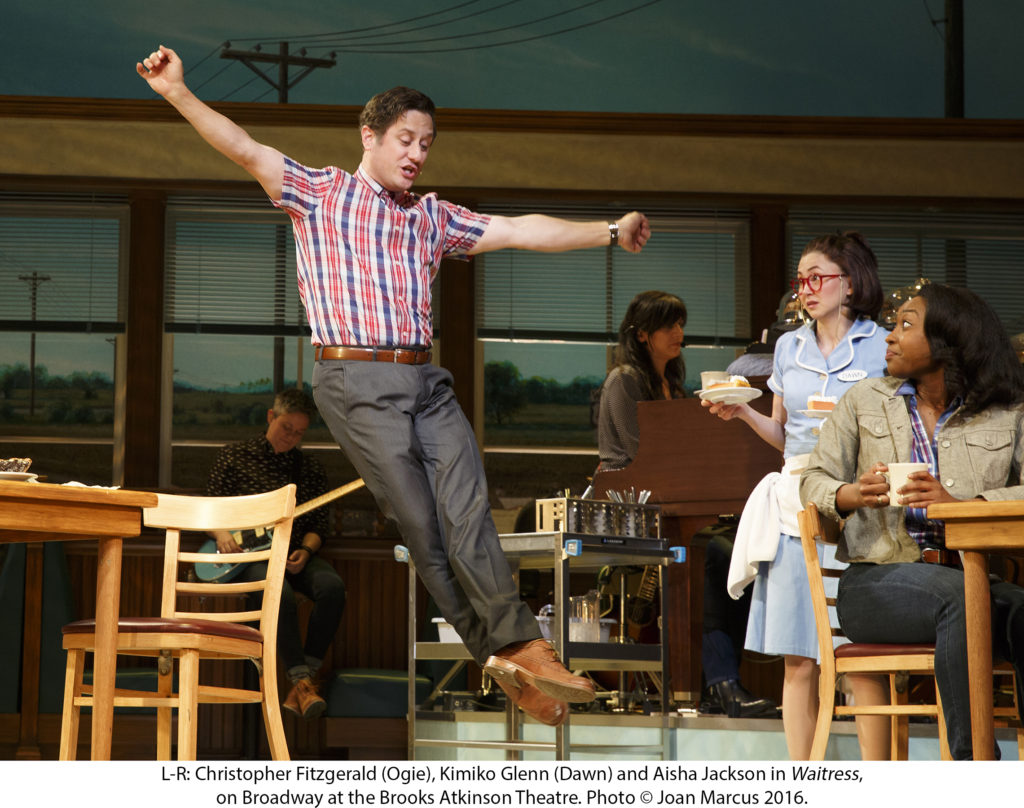 In a Broadway season chock full of innovation, Waitress is no exception.
You may want that slice of pie at the end of the show to top off the feeling of deep warmth and satisfaction, because Waitress serves up deep dish musical theatre deliciousness.

Wow, what a season for outstanding women on Broadway. I am glad I don’t have to vote for the Tony’s. It would be so hard to choose.