New on Broadway: Take Me Out and American Buffalo

Broadway shows are opening at a frenetic pace this month!

First, so many have waited to get past the wave of Covid that so liberally hit casts in the winter, and the frenzy to open this month is because of the Tony Awards cutoff date enabling shows to be eligible for a nomination.

Having seen so many in such a short time, I am organizing this week’s article by focusing on two plays that are revivals, both feature an all-male cast, and both have limited runs. 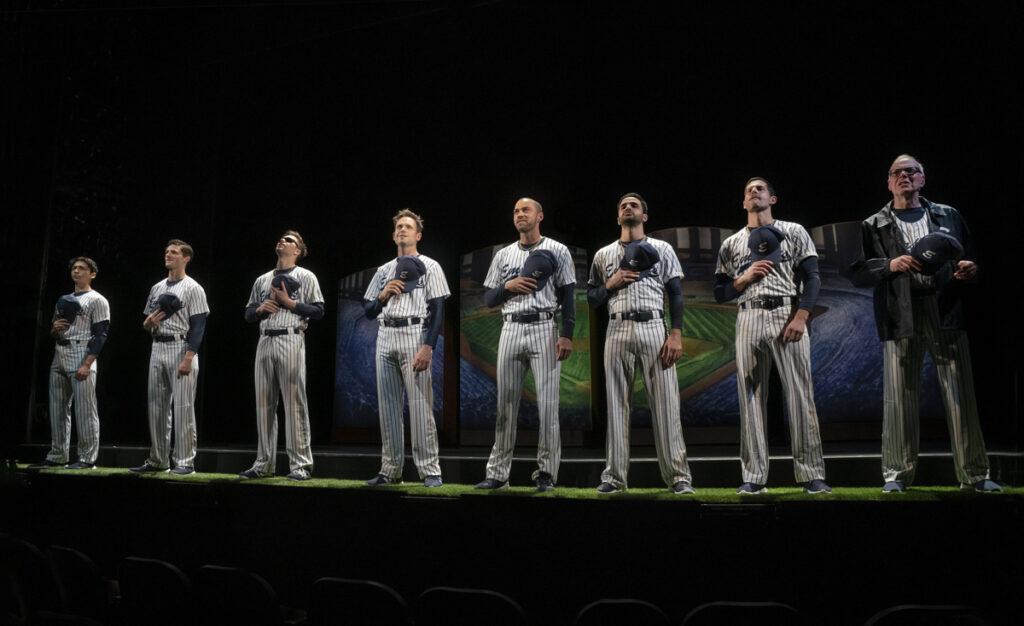 Take Me Out, written by Richard Greenberg, originally bowed on Broadway in 2003, and won the Tony award that year for Best Play. A revival is underway at the Second Stage Hayes Theater. 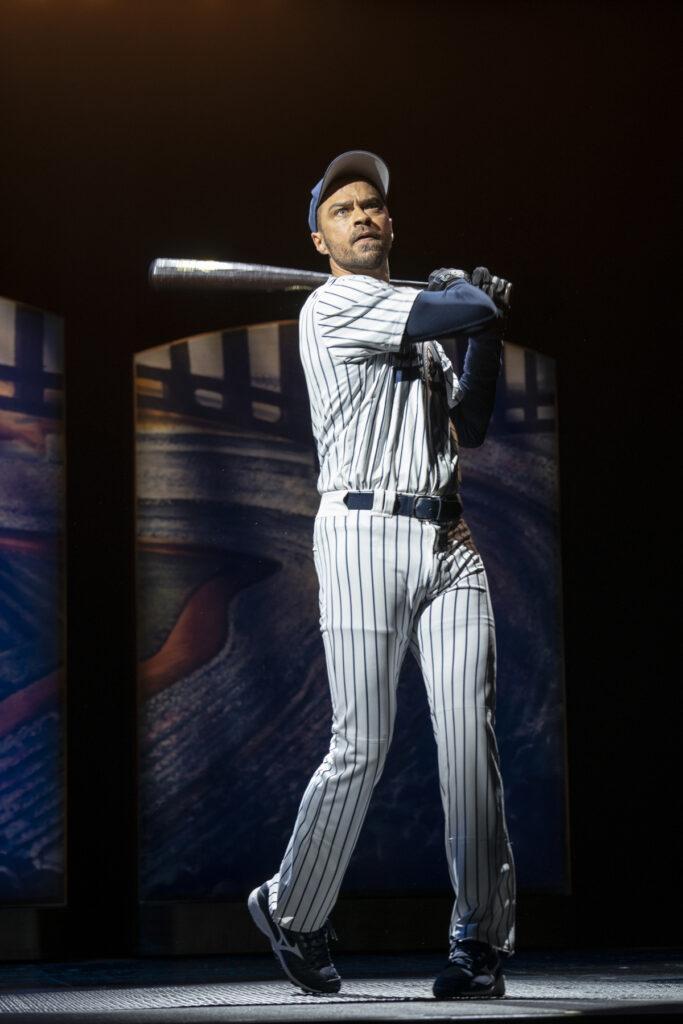 Jesse Williams plays the main character, Darren Lemming, a star baseball player on the revered Empires team. When Darren decides to live his truth and declare that he is a gay man, the repercussions that ripple through the team make for a compelling and important play. While the topics of racism and homophobia are front and center, Greenberg also explores the concept of friendship and what that truly constitutes. The entire cast is stunning, the show is intense, and the full out male nudity of all the players is handled with what appears to be ease by the actors. It surely helps that each one is in incredible shape, and the numerous shower scenes (yes with real showers) on stage helps to bring us into the inner sanctum of a locker room.

Darren wants to retire from baseball at the moment that Mason discovers the poetic nature of the sport. When Mason, who lives a rather mundane, insular life, begins to spend time watching baseball and realizes he loves the game, he is sparked by a passion that even he is surprised by.

Mason persuades Darren not to retire just yet, and the story takes on a curve ball (pardon the pun) that is foreshadowed by the narrator of the story Kippy Sunderstrom (Patrick. J. Adams).

All the actors are wonderful, and I especially want to point out Michael Oberholtzer who plays Shane Mungitt, a phenom pitcher from a tiny mountain town brought up from a minor league. Shane can barely communicate, and when he does, he talks about his minority teammates in the most racist and vile of ways. Hiram Delgado (who was so brilliant in Skeleton Crew earlier this season) is another stand out as Darren’s best friend, Martinez, who encourages Darren to live his life and be authentic. When Darren does just that, Martinez feels betrayed and disgusted by his friend’s lifestyle.

There are many intricacies to be explored in Take Me Out, directed by Scott Ellis.

One note for audience members: your phone will be placed in a sealed pouch that can only be unsealed by ushers with a dedicated device to unlock them. That is to protect the actors from being photographed,  who quite literally put it all out there.

Take Me Out is scheduled to end June 11, so hurry and get your tickets. Take Me Out 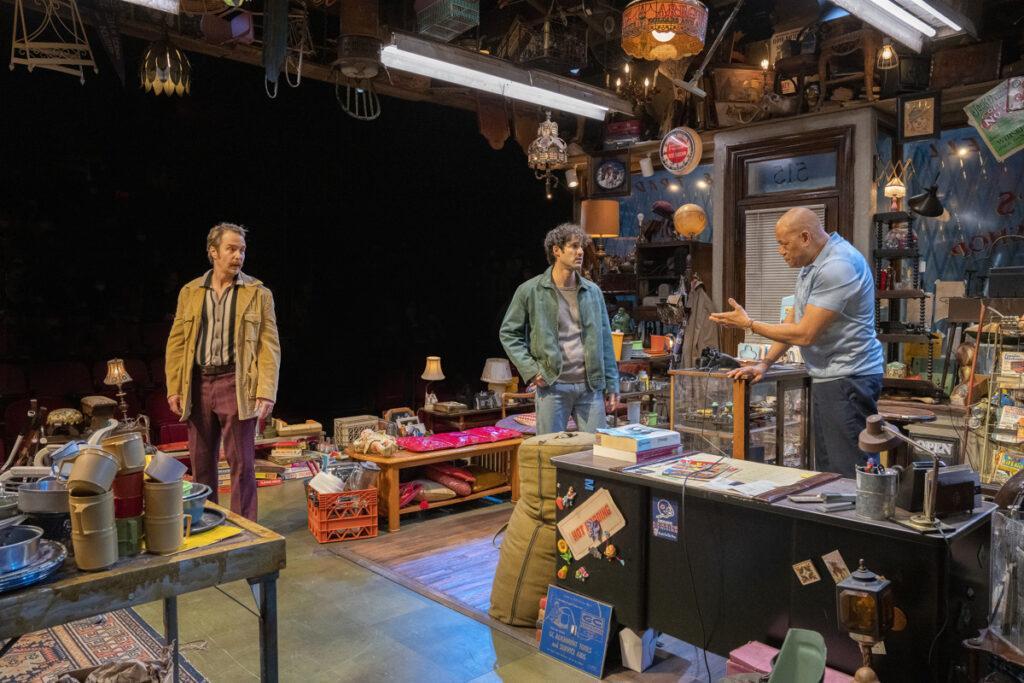 Another revival is of a play that originally opened on Broadway much longer ago. David Mamet’s American Buffalo written in 1975, had its Broadway debut in 1977, with a couple of revivals thereafter. The latest at Circle in the Square stars Laurence Fishburne, Sam Rockwell and Darren Criss.

I remember when American Buffalo opened so many years ago. The language used by the characters was considered appalling, filled with endless curses as well as misogynistic and racist epithets.

Despite the dialogue, Mamet’s brilliance in showcasing three small time hustlers utilizing the foul language that befits them, is what makes this character driven black comedy so rich and real.

Their bumbling attempts to score money and “do business” as well as their interpersonal dealings with each other make for a fabulous night at the theatre.

This production, played in front of a semi-circular audience, has the challenge of creating the environment of a junk shop with no back walls. Scott Pask’s delightful scenic design with “stuff” everywhere, even items hanging from the lights, creatively sets the scene.

When things get out of hand and some violence ensues in the second act, the set gets trashed, and I was impressed that no one in the front rows had anything thrown on them. 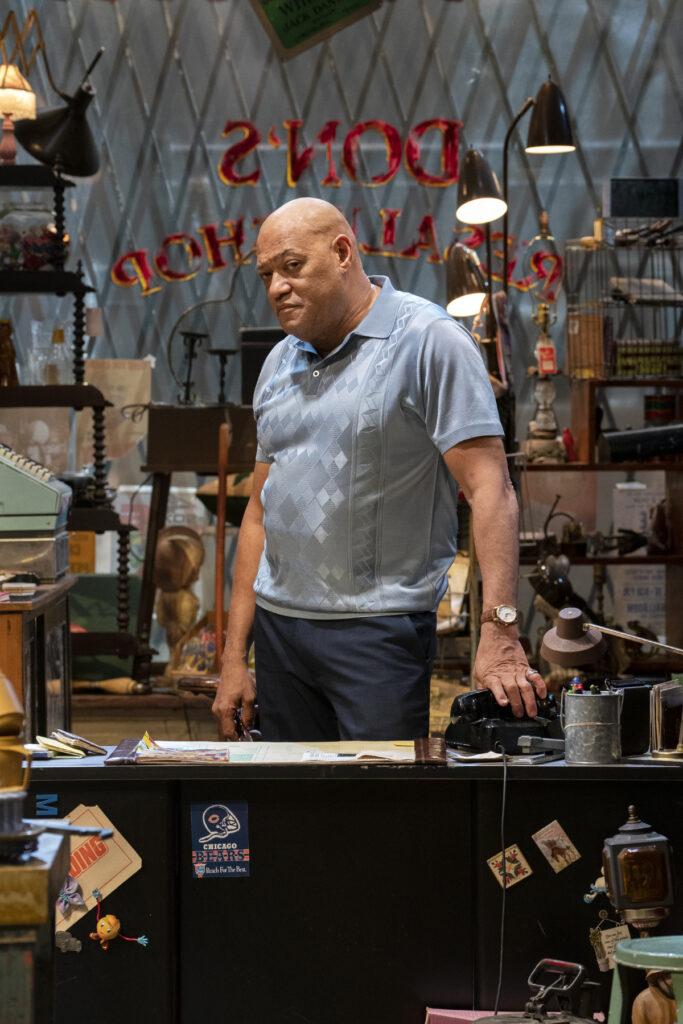 Laurence Fishburne plays Donny, the owner of the junk shop, who takes young Bobby (Darren Criss) under his wing. Bobby does some odd jobs around the shop. A plot to steal back a coin that was sold to a well-dressed man is hatched, and the rest of the play centers around that plan. Another ne’er do well named Teach, hilariously played by Sam Rockwell, is part of that plan. Dressed in horrendous 1970’s plaid pants, Teach spends a great deal of time explaining the way strategies in business take place. All three actors are simply fabulous. Laurence Fishburne is a delight to watch as he commands the stage. 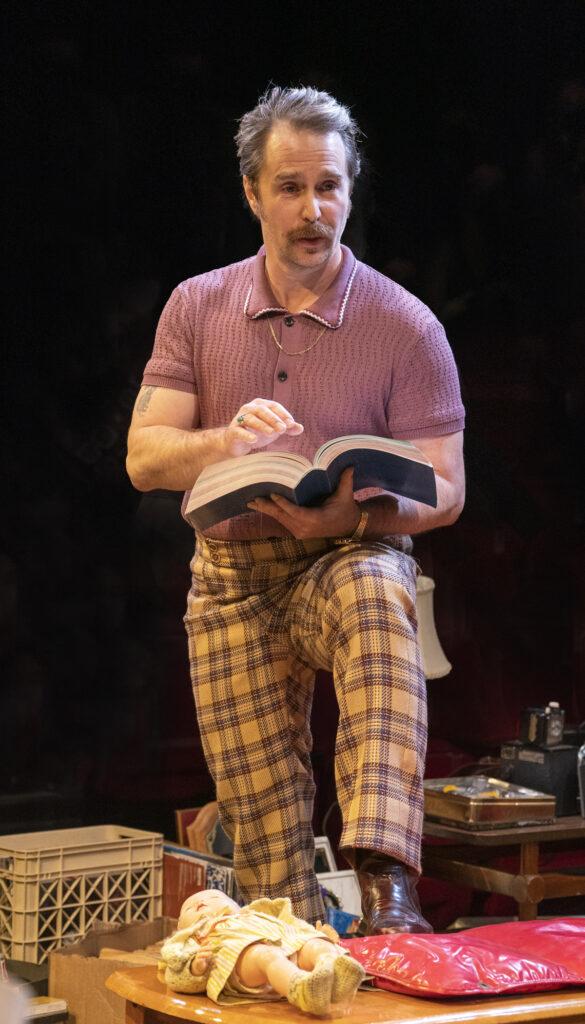 When American Buffalo concluded, I felt a deep sense of satisfaction in seeing a play that was well crafted, complete with fleshed out real life characters. It was a pleasure experiencing the artistry of accomplished actors navigating a beautifully designed set on a challenging stage.

Directed by Neil Pepe, this play runs through July 10. https://americanbuffalonyc.com/