New Destinations for Spring 2015, with Women Travelers in Mind 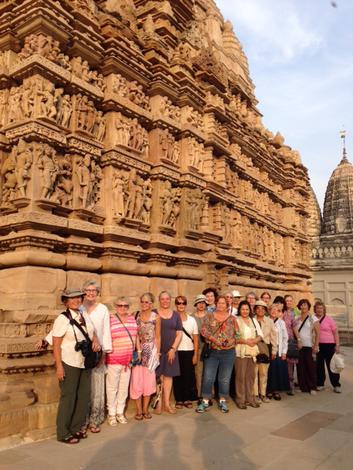 Phyllis and her group on a recent trip to India

Yes statistically women seek out new places to visit more often than men do. The adventure travel market is more than half women; adventure meaning exotic locales, as much as actually ‘getting down and dirty’. So where are we going in the next year that is new, newish, or a must see before it is too late? A sad truth about our globe is that it is always changing: some places like Cambodia return to tourism, others like Egypt, disappear for a while or forever.

Cuba, not new but if you wish to avoid the cruise crowds and a future of 100’s of day trippers, go now. The island is 90 miles from Miami, as we know, but a century different. Besides the cars and tumbling buildings, Havana’s museums have some of the best art collections in our hemisphere from Canalettos to Wilfredo Lam. Havana still has the same amazing music you know from old newsreels, a graphic art tradition you see on walls as well as monuments, and of the best ballet in the world. Another city to include in your visit is UNESCO Heritage, Trinidad, one of the best preserved ‘sugar’ trade towns in the Caribbean.

Northern Ireland is no longer the site of religious warfare, and full of the dramatic scenery we associate with the Republic of Ireland. From Dublin, to Belfast is an easy day trip,and one which will surprise, awe, sadden and move you. Northern Ireland is still part of the UK, so the Pound prevails making it a tad more expensive than euro usage areas. Giants Walk, the coastline and walled city of Derry are worth the trip many times over.

Easter Island is increasingly hard to get to, despite the uptick in adventure travel to remote places. Part of Chile but way west in the Pacific Ocean, Easter Island and its great stone sculptures are only reachable by one flight a day. And that one flight continues further West, meaning few seats are available. Chile has always been a tourist destination, but with Easter Island and the moonscape of Atacama Desert, a new kind of visit exists for women.

Iran is re-opening its doors to Americans. Some tour operators already sell tours to Iran, and reports are that visitors feel welcomed and safe. However, it must be noted that Iran is still high on the State Department warning list. Iran is often combined with the Stans nearby and or with the Emirates, both safe places to visit for women.

Egypt, Tunisia, parts of China (Western Uighur areas), Timbuktu in Mali (The Women’s Travel Group did visit Timbuktu a while ago), parts of West Africa due to Ebola. Still totally safe by the way is South Africa where there is no ebola at all thanks to the 1,000’s of miles of distance and excellent health system)

Also off is Libya with Phoenician Leptis Magna, of the best Roman ruins around the Med, or trading center, Aleppo destroyed apparently by the Syrian Civil War.

A clever way to see what is in and what is out, is to look through travel sites of major British newspapers. Where the Brits go in 2015 is where we will go 5 years later! Another way is to scan The Lonely Planet Guidebook on your interest area (Australian so less skittish), and in fact Lonely Planet has a listing of tour companies that offer serious adventure. Even if you do not want ‘serious adventure style’ travel, the area will give you an idea of safety. Finally visit the websites of European companies like Noble Caledonia, to see where they are going

As usual carpe diem is the name of the game. Regrets do not leave you with fond memories.

Some travel ideas from The Women’s Travel Group, awarding winning tours for solo traveling women. The photos are from recent WTGroup tours to India.