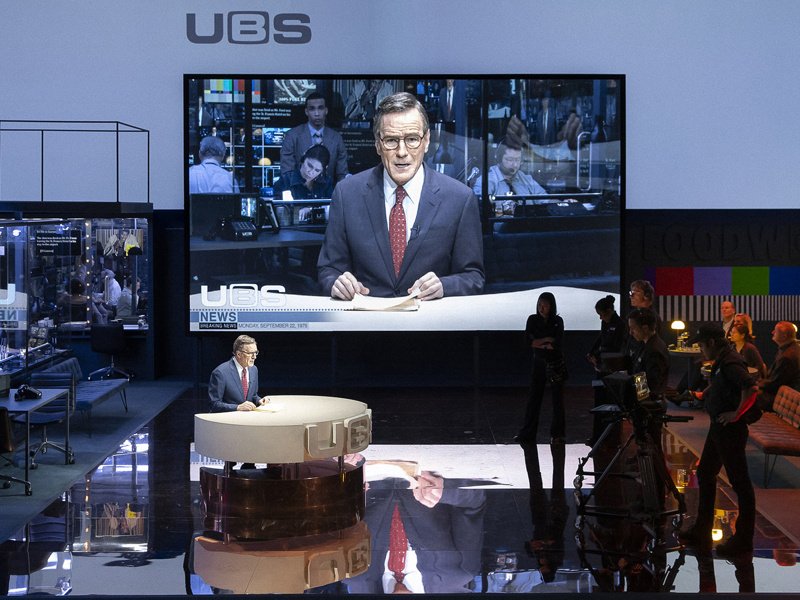 My final Broadway article for 2018 is about Network, the play starring Bryan Cranston.

And what a great note to end on for this year of spectacular plays.

I can’t remember a season that offered such a wide variety of truly excellent plays and performances, and Network surely belongs in the group.

Innovative, fresh, unique and yet still chilling, Network hits all the points brilliantly. Based on the Paddy Chayefsky film, and adapted by Lee Hall, directed by the acclaimed Ivo Van Hove, with brilliant set design by Jan Versweyveld, this stage piece provides a wild ride for the audience.

Utilizing video shot in real time, projections, a set that transitions from the behind-the-scenes technical director’s area, to the news set, to a restaurant and bar, the action moves swiftly, but cleanly.

And something new for the Broadway stage, audience members can actually enjoy a dinner on stage during the performance and blend in during the bar and restaurant scenes.

The dinner menu was created by a former white house chef, bringing a political element to the dining option. That is the one area I am not crazy about with this play. I never want to see audience members on stage, as I find that convention extremely distracting.

I was curious to know how plates could be served and removed during the show-on stage-without causing noise or disturbance. I must say the service is choreographed in a way that is quite seamless, and I was not terribly aware of the servers. They did a great job. But still, I am never a fan of viewing an audience integrated on the set.

Back to Network. What is most interesting is that this piece seems more relevant today then back in the 1970’s when the film was produced.  Or perhaps Network highlights the fact that nothing has changed. I was happy to bring my dear friend Fern to the show, who, like me, was fascinated by the wall of commercials that ran continuously as a backdrop, each one iconic, and so incredibly familiar. (Did over 40 years since they aired on television really pass??)

This masterful play covers so much ground in its content. Not only is this a statement about media and politics, a population lulled into acceptance, and then energized by a charismatic prophet, but it also uncovers human instincts, including the frenzy of a ratings-greedy head of programming, lustful for power and sex, a network executive who buys into her desire for both, and his wife who learns about the affair, and wisely tells him how he will eventually be so devastatingly hurt.  I’m telling you, there is a lot to take in with Network.

Network brings in audience participation, an opportunity for Bryan Cranston to sit in the audience and actually riff with the crowd, and provides a good deal of improvisation for the entire cast.

The play is performed without an intermission, and is just about two hours long. That seems like a long time to go without a break, but you will not be aware of the time. You will be engrossed.

After the shocking and well orchestrated finale and curtain call, be sure to stick around for a little video montage that provides an interesting historical perspective.

Network has been extended through April 28. https://networkbroadway.com

For more theatre and food news, listen to “Bagels and Broadway with Valerie Smaldone” Saturday mornings 9-10 on AM970, online at www.am970theanswer.com, Alexa and podcast “The only theatre and food focused radio show in New York City.”