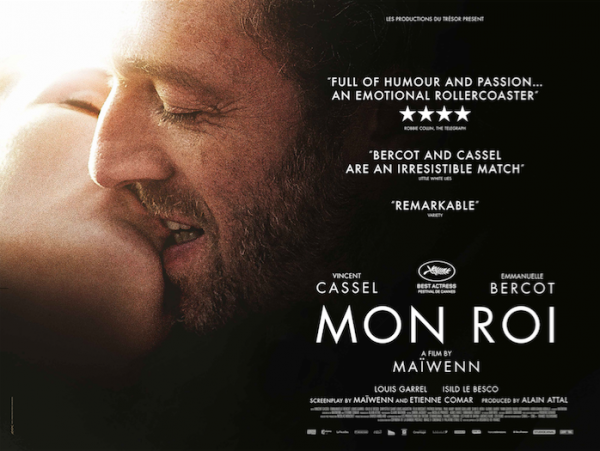 In rehab after a skiing injury, Tony has flashbacks of her past with Georgio. Played by Vincent Cassel and Emmanuelle Bercot, two highly attractive and talented actors, it’s easy to appreciate the chemistry between them. They have so much fun and it feels so genuine — we want to deny our suspicion from the get-go: this is not a healthy relationship.

Writer / Director Maïwenn (nee Maïwenn Le Besco) an actor herself, jumps back and forth in time with a light hand. As a French woman, perhaps she’s naturally gifted at portraying authentic characters; real-life people. We like them, we don’t like them; but they’re never artificial.

It’s a bit long for a slice-of-life, but compelling throughout. We’re hopeful for the couple, though Mon Roi might remind us of failed romantic choices. This is a cautionary tale: don’t fall in love too quickly. (In French with English subtitles.)