The forever boyish and humorous Michael Feinstein was on fire August 23 at his namesake Feinstein’s/54 Below in Summertime Swing. Ah, yes, the living is easy, the music magical as the distinctive mellow tones of Mr. F filled the capacity seated room. Whether it’s Michael at the piano singing the longing, passionate “Losing My Mind” (Stephen Sondheim), or being accompanied on piano by maestro Tedd Firth (with Sean Smith on bass and Mark McLean on drums) to a rollicking big splash rendition of Jerry Herman’s “Hello Dolly”  (featuring some newly penned updated lyrics), the new production starring Bette Midler due on Broadway this season. There’s no doubt that Michael is the ultimate charmer.  In between, expect his witty references to all things Jewish that always get a chuckle. 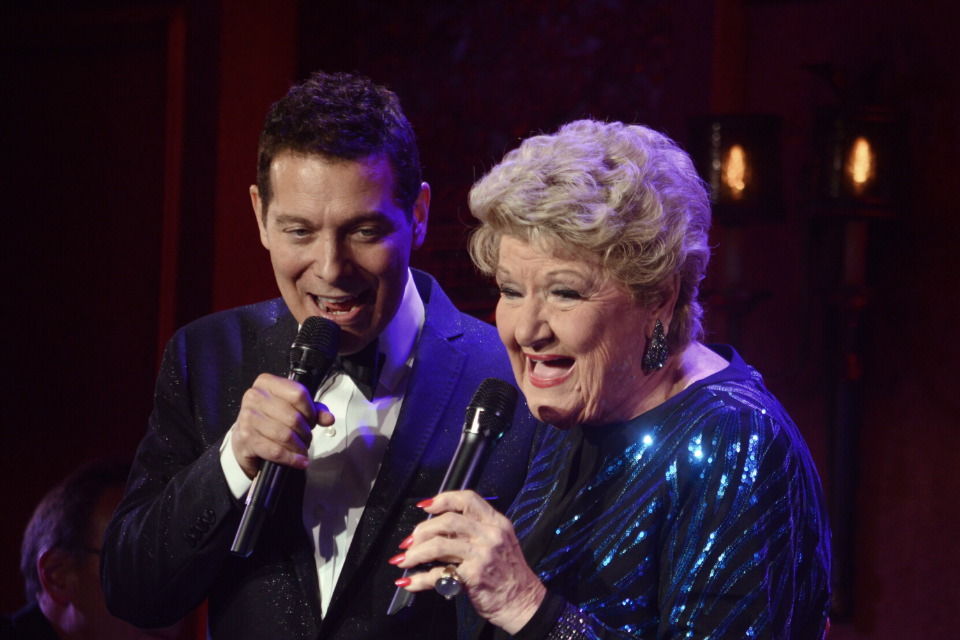 His 88 year young guest star, Marilyn Maye, wasn’t too bad either as she regaled the audience with some of her favorites – “Rainbow Medley” and the ultimate story song, “Bye-Bye Country Boy” (Blossom Dearie/Jack Segal) all to thunderous applause. The lady just gets better and better, her voice strong, poignant and nuanced.  Of course, she’s the one and only marvelous Ms. Maye that can do no wrong. One day she has to sing the telephone book to prove a point.

Together, these two legends make magic happen over and over again as they “Dream/Dancing Through Life” (Johnny Mercer) and counterpoint on Arlen/Mercer’s “Hit the Road to Dreamland.” They are nothing less than. . . adorable, their sounds blending in harmonic accord.

Michael proceeded to tear down the house as he rocked at the piano with “Great Balls of Fire” – a new and exciting image; great fun for the audience and especially for Mr. F.  Sitting at the piano, he chose every Great American Songbook tune I always want to hear; “I Concentrate on You/Isn’t It a Pity/Isn’t It Romantic/It Had to Be You.”

Back together for a grand encore, Marilyn and Michael offered up a playful and parodied “I Love a Piano” and boogie woogied on with “Boogie Woogie Bugle Boy.”

There are no more superlatives I can use. . . just letting you know that if you miss their show, you’re missing the Tony Award of Cabaret. Remaining shows: Aug. 24 thru Sept. 1 at 7 pm except Aug. 27 at 9:30 pm.