Little Shop of Horrors is Back! 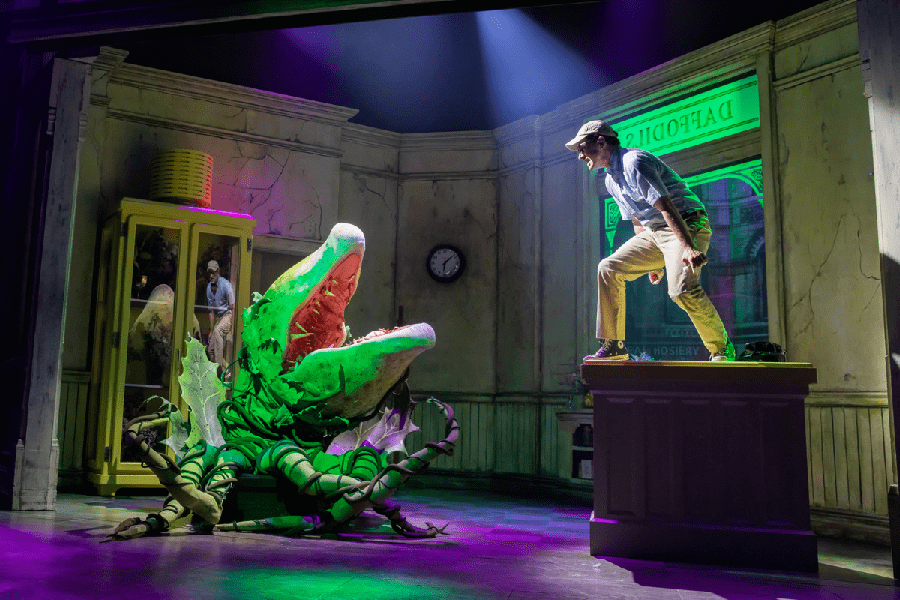 A florist with no customers on Skid Row. Shop workers with issues. A most unusual plant.

That is the main premise of the classic musical Little Shop of Horrors with book and lyrics by Howard Ashman and music by Alan Menken.

The campy, over the top version now playing at the Westside Theatre provides squeals of delight, unadulterated musical entertainment, and what turns out to be a love affair with the insanely grotesquely gorgeous greenery…that requires a very unique type of plant food.

If you’ve ever seen Little Shop, you know that the sweet little plant discovered by Seymour, the nerdy young man who is given a place to stay and a purpose by Mr. Mushnik, the shop owner, grows into an out of control vegetation that takes up every inch of space with a commanding voice that demands to be fed. Before that transformation happens, Seymour realizes that because the plant is so unusual, (he names it Audrey II after Audrey his co-worker) it can attract customers, and so turns the failing shop around. In love with the sexy Audrey, Seymour meets her abusive boyfriend, and the fun begins.

Directed by Michael Mayer, Little Shop of Horrors has a phenomenal cast, now starring the endlessly talented Rob Mc Clure as Seymour, Christian Borle as nutty Orin Scrivello, DDS and Tammy Blanchard as the damaged, but kind Audrey.  I must also mention the incredible Aaron Arnell Harrington, who we never see but hear, creating nuance upon nuance, as the voice of Audrey II, the people eating plant.

I waited to see Rob McClure take over this role. Having appreciated his talents in Mrs. Doubtfire (which truly was an astounding performance) he is also just as wonderful as the hapless Seymour.

And then there is Christian Borle-another favorite of mine, hilarious as the dentist on a Harley who has a little nitrous oxide addiction, and a sadistic orientation. Tammy Blanchard plays Audrey full of awkwardness and discomfort in her own skin, as the woman with a past who doesn’t believe she deserves to be treated right.

This is a show that purely delights especially because of the incredible puppetry that brings Audrey II to life.

The arc of the story is simple. Once we learn that the plant is overtaking everything and that it must be fed people (lots of them), there is no place to go, so the ending is somewhat anti-climactic, but who cares? The music, the acting, the production is so crazily enjoyable, the flaws in the piece are irrelevant.

This Little Shop of Horrors brings back the pleasures of fun at a night in the theatre.