A real cool guy sang his way into 54 Below via the front door with Hoagy Carmichael’s “Stardust” wearing sunglasses, a leather-like jacket and jeans on opening night July 5. 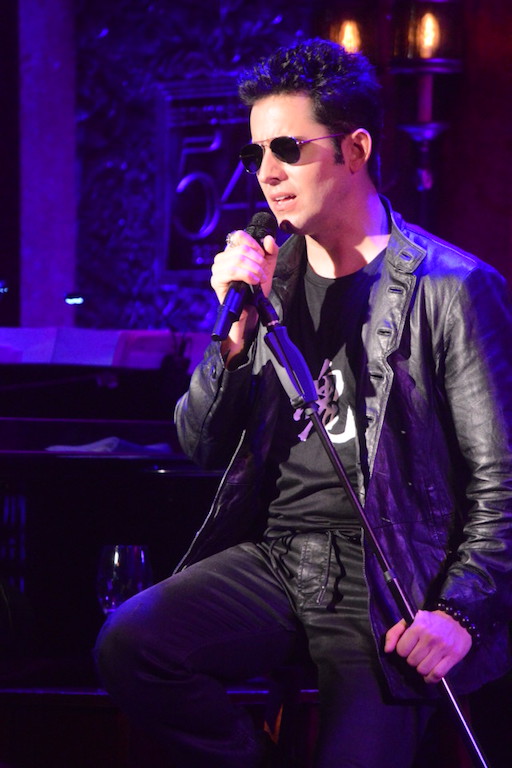 The Doo Wop kid, forever known as the original Frankie Valli (for which he won a Tony Award) from Broadway’s Jersey Boy’s, is grown up and his heartbreaker tenor voice is in fine condition – smooth, stylized, with thrilling falsetto.  John Lloyd Young cut the patter to a minimum to give full spotlight to his vocal prowess (what a pair of lungs!) and that of his musical director, Thomas Faragher on piano – who served as backup vocalist as well.

JLY knows how to titillate his fans, especially when he winds his way into the audience of screaming females for “Hold Me, Thrill Me, Kiss Me (Harry Noble) and hit of the night “Sherry” which deserved and got a standing ovation. Hmmm, we do love those Jersey Boys!!!

His song setups were just enough lead into the variety of tunes that elicited squeals of delight like “Ooo, Baby, Baby” (Smokey Robinson, Pete Moore), with some nice harmony via Tom Faragher, along with “Unchained Melody” (Alex North, Hy Zaret) and “My Prayer” (George Boulanger/Jimmy Kennedy).

A perfect opportunity here, with the audience in the palm of his hand, for JLY to introduce some of his original material “Alone Together” and “Slow Down Calling” written with Faragher.

Appointed to the President’s Committee on the Arts and Humanities, he was part of the second delegation to Cuba where he had the opportunity to sing “Ooo, Baby, Baby” to its writer, Smokey Robinson. Also included was a song “Manifesto”(Victor Jare), sung in Spanish, about the ideology of a man who died.

Sporting some red paint on a thumb fingernail, a T-shirt with Japanese emblem, he is his own man.

I kept thinking about Elvis Presley (especially as the screams persisted) and, sans pelvic gyrations, there’s no doubt that Young’s got it and knows how to work it.

You’ll have a chance to scream along thru July 9 with shows at 7 pm.