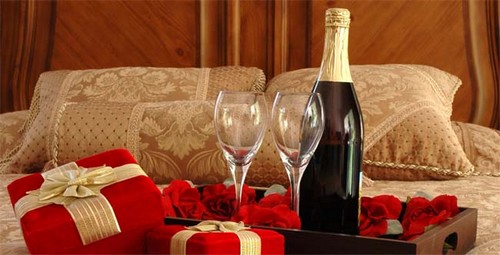 My work as a Feng Shui Master has brought me into all kinds of spaces but none is more tied to the heart as the bedroom.

Ann called me for a consultation because her love relationship was at a dead-end. She toured me around her home with ease but when we entered the bedroom this tomato became emotional. I asked Ann which side of the bed was hers and which was Gary’s. I was somehow not surprised to see that right next to Gary’s side of the bed there was clutter. A desk with a computer, some of Ann’s clothing, shoes, a pile of papers, and a large tri-fold mirror sat in plain view. Ann defended her use of that space for storage, explaining that because Gary had his own place, she felt free to use all the space for her personal items. Without comment, I looked under the bed and saw her old cheerleading outfits from high school, love letters from a college boyfriend, a collection of stuffed animals, and a large plastic box that had one lonely noisemaker and paper hat from New Year’s Eve 2000. Relics of an old life and an old love were still stuck under her bed. No wonder Gary was non-committal!

I talked to Ann about the energy beneath the bed and how she could un-clog the channels of her romantic life by releasing the blocked energy that lay congealed under there. I also told her that storage under the bed can cause confusion, restlessness, allergies and sleepless nights. Another point I made to Ann that shocked her was the negative effect of her collection of stuff on Gary’s side of the bed. It was made even more dramatic by the placement of the tri-fold mirror, which reflected Ann’s possessions multiplied by three! A bedroom with so many of one person’s possessions in view leaves no room for a partner.

I asked Ann to imagine that Gary had agreed to share his life in this apartment with her. Clearing out his side of the room would make room for him on an energetic level. I suggested fresh cut flowers be placed in two identical vases. It is also important to have identical end tables on both sides of the bed, with identical lamps on each side as well. What you see is what you get, so if your partner’s side of the bed has a larger table than yours, it often means that he or she is carrying more of the responsibility in the relationship.

The wall opposite the bed is called the “Red Bird.” In Feng Shui, this location is where your future is depicted. Carefully choose what you put on this wall. It should represent whatever your idea is of a bright future. Ann’s “Red Bird” was occupied by an oil painting. It was a picture of a beautiful redheaded woman—in fact, one who looked a lot like Ann—sitting sadly alone staring at a telephone. Was she waiting for it to ring? I gently pointed this out to Ann, and suddenly she could no longer keep her emotions locked up. Her eyes welled up and a tear rolled down her cheek. I put my hands on her shoulders and kissed the top of her head. There was no need for words.

The next time I spoke with Ann she told me she had made all the changes I suggested, and was currently in the process of looking for a new piece of art, one that depicted lovers for her “Red Bird.” A few months later I received a call from Ann. “Debra… I have so much to tell you! I found an incredible painting of lovers and was waiting for it to be delivered when Gary and I had a blowup. Three days after our breakup, my painting arrived and I hung it on my “Red Bird” wall. The painting was nude lovers in an embrace. The next night I went out to meet some friends for dinner. I got there a little early, so I sat at the bar and ordered a glass of wine. This handsome man sat down beside me. We started to talk. We’ve have been seeing each other ever since. Guess what? He moved in this week and I have never been happier!” By clearing her clutter, this Tomato, made room for love.