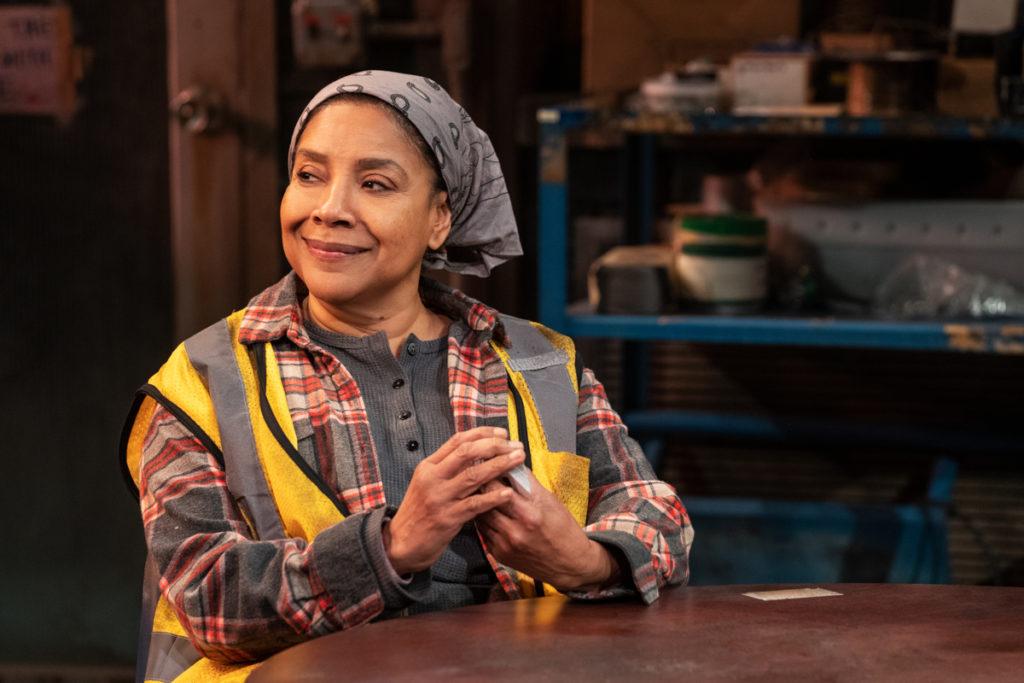 Skeleton Crew, masterfully crafted by Dominique Morisseau, is a multi-layered play that takes place in 2008 in an automobile stamping plant in Detroit. The piece shines a light on the life of factory workers and the camaraderie they enjoy, the tenuous and strained relationships that exist between worker and manager, and the demise of the auto industry in the once shining Motor City. All the action takes place in a break room where the workers have a locker, a place to eat and a couch upon which to relax.

Phylicia Rashad stars as Faye, a senior member of the crew, who is nearing retirement.  Reggie is a new manager who leaves copious housekeeping notes around the break room. He and Faye have a special bond, as he is the son of Faye’s dear friend, and was considered part of his family. He tries very hard to have the crew stay on the straight and narrow as he does not wish to impose any harshness upon them. Conflicted by the thin line that exists between workers and those who make the rules, Brandon J. Dirden who plays Reggie, does an amazing job of bringing out all the nuances of this complex character. While there are bubbling tensions between Reggie and Dez (Joshua Boone), a good hearted but street-smart worker who gets caught with a gun by Reggie, no violence takes place in this play, and it ends on a very hopeful and inspiring note.

As for Phylicia Rashad, we haven’t seen her in a role like this before. Usually glamorous or professional, her character in Skeleton Crew is anything but. While Faye, who is homeless and dealing with a serious health issue, has secretly been living in the break room of the plant, she is filled with integrity and honor. Rashad is fabulous in this piece.

Then there is the very pregnant Shanita (Chante Adams)  who is upbeat and funny and proud of her work. Dez is smitten with her and Chante spurns his advances until she gives in and displays her affection for him in a bold way. Every actor in this ensemble cast is perfection and the chemistry between them is unbeatable.

The play begins with performer Adesola Osakalumi, whose choreography seems to embody the automaton nature of factory workers. His movement is set against driving music and lively projections and is used as a convention to create transitions in the play.

Skeleton Crew is smartly written with searingly insightful dialogue, and is clearly one of the best plays of this unusual Broadway season.