Downton Abbey: The New Era…Our Old Friends Are Back 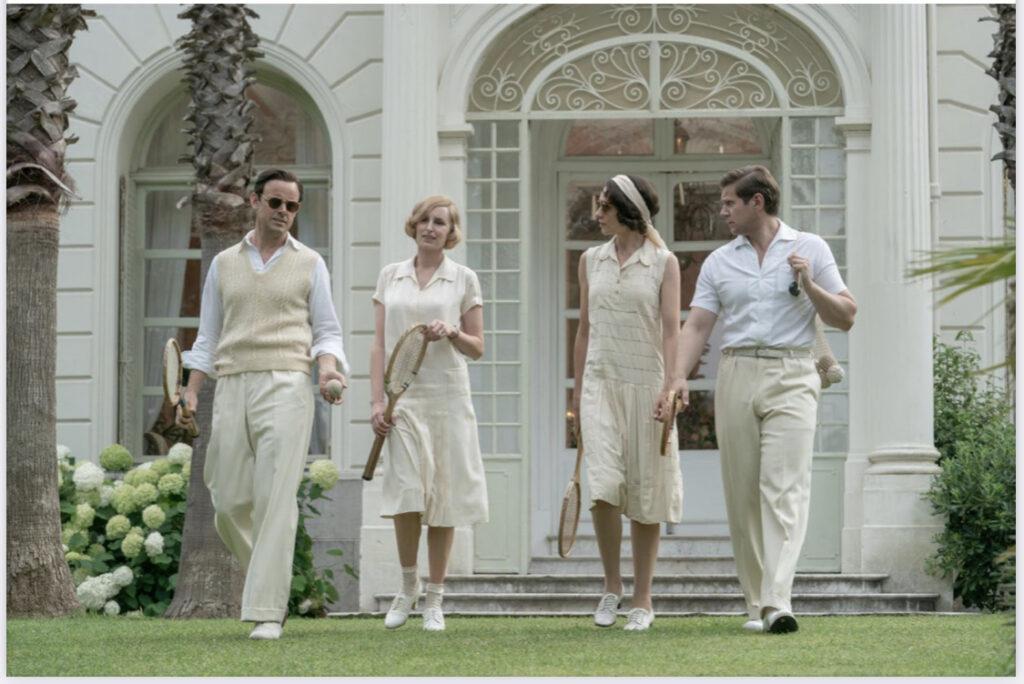 Forget about the naysayer reviews you may have read about the latest Downton Abbey Movie—Downton Abbey, A New Era. If you are fan of the TV series, you will be very happy with the latest movie. It takes place at Downton and at a beautiful villa on the French Rivera, so the scenery is a delight.  It is now 1928 and fans of the roaring twenties fashion will be gob smacked.

The film starts out with the wedding of Tom Branson to Miss Lucy Smith, daughter of Maud, Lady Bagshaw. Since the decline in her health, the Dowager has moved back to Downton to be closer to the family. We soon find out that Violet has inherited a villa in the South of France and in turn she wants to leave it to Lady Sybil and Branson’s daughter, Sybbie, in her will. With the question of why the late Marquis de Montmirail left such a generous gift to the Dowager hanging in the air, Lord and Lady Grantham  and an entourage head to the villa in the south of France. 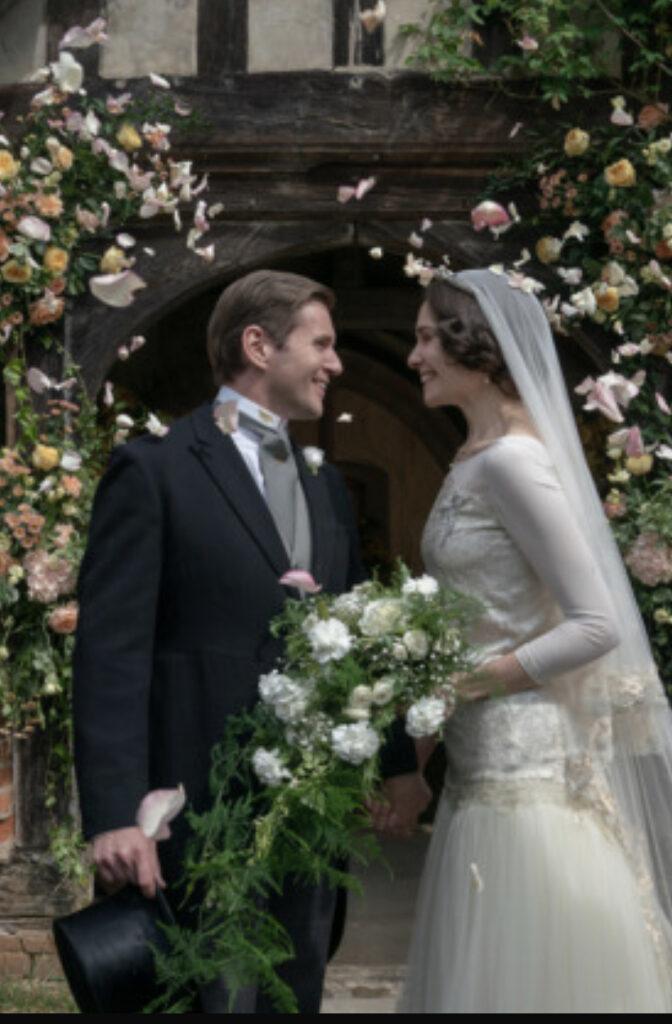 In the meantime, a film director wants to set his latest silent film, at Downton Abbey. Robert thinks it’s a grotesque idea, but with an exuberant offer on the table and a quick tour of the attics and leaking roof with Lady Mary, he reluctantly concedes that Mary is in charge and should do what she thinks best. As the movie crew and film stars prepare to descend on Downton Abbey, some of the family make plans to escape the impending chaos and take the opportunity to visit the villa in the South of France. 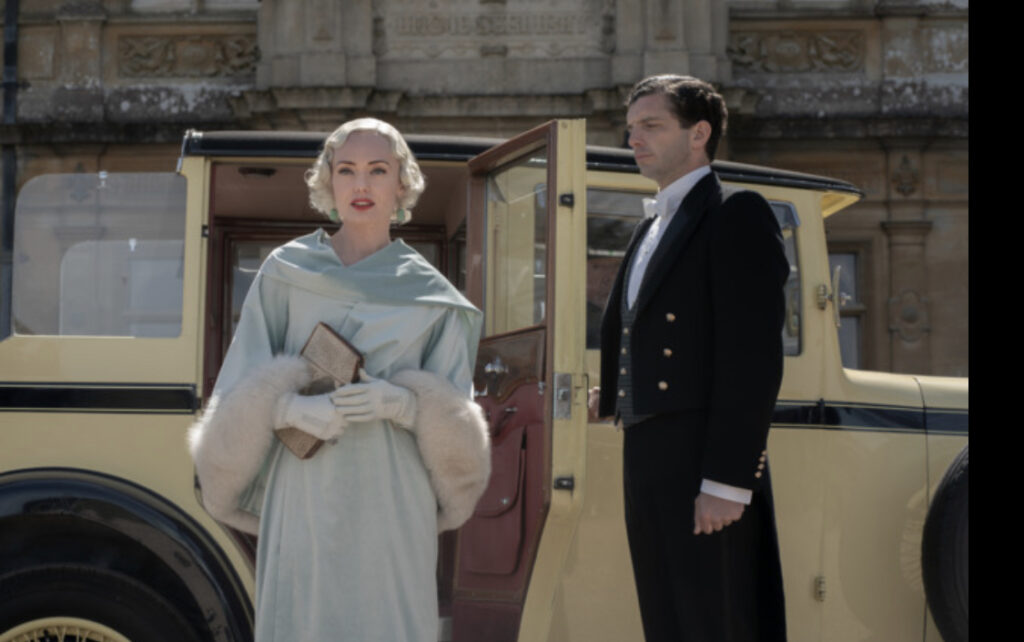 It’s wonderful to see our old friends return from upstairs and downstairs. We’re quickly updated on everyone’s lives and the movie offers some very satisfactory resolutions.  See it on a big screen to enjoy the full experience of scenery and costumes.

An Interview with Julian Fellows 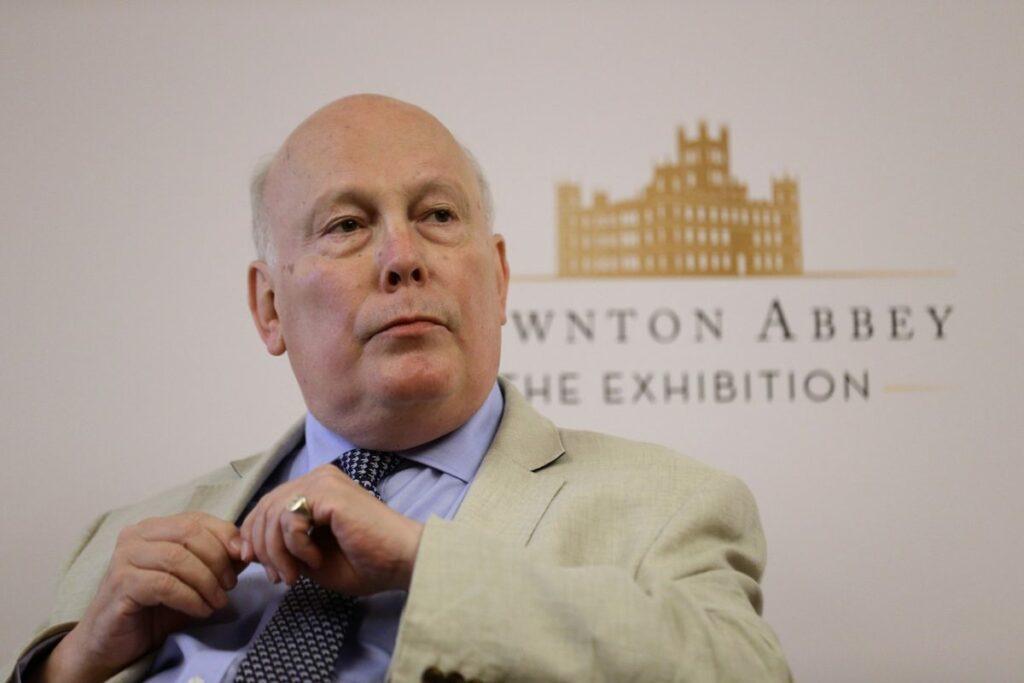 Here is a behind the scenes interview provided to Ellen Easton  by her friend, Julian Fellowes.

Where are the Downton characters at the beginning of this new movie?

At the end of the first movie it was clear that Mary was really taking over as the boss at Downton and that’s a theme we go with throughout this second film. One of the jobs of being in a hereditary business is to accept that it is hereditary and there comes a time when your usefulness is diminished and the moment has come to hand on to the next generation.

Edith’s marriage to Bertie is going well and she has now given birth to a boy but in a rather modern sense, running Brancaster and motherhood is not quite enough for her. She needs an activity that draws on her brain and something outside the family unit. In the 1920s and during the First World War, women had been put to work in different areas of employment and that had stimulated them to want to work. Cora and Robert’s job in the first film was to host the King and Queen, which they did with good grace. They both have a more difficult emotional journey in this film. I wanted to give all the characters more to do this time round and I am rather pleased with the way it turned out.

What did Simon Curtis (the Director) bring to the film?

Gareth and I started thinking about Downton about 12 years ago and Simon has been part of the inner structure of the show since then; as have all the partners of the core team and cast, including my own wife. Simon has a very strong grasp of narrative, which is always a useful gift, but with Downton, it’s an essential one because of the multi-narrative nature of the scripts. Some of the stories are big and run right through the film and some are quite short and are told in only three scenes. However, all the stories are interlocking and there are many scenes that serve more than one story, which is why, when we have our read-through at the beginning of production I always say to the actors that they must take responsibility for their own story.

How do you even begin to structure a film like Downton that has so many multiple voices?

My first lucky break was being asked to write a film for Robert Altman, which turned out to be Gosford Park. I suspected that Altman felt out of his comfort zone making a film about the British class system so I thought the only way around this is to make it a completely Altmanesque script; that every time he turned the page he would recognise the structure of it. In order to achieve that I went off, in those days to the video store, and took out every single Altman film I could find. I watched them over three or four days, and I designed the film, despite its setting, to make Altman recognise his own territory. As a result, I found that I liked that form of narrative and it suited me. From then on, I moved away from the straight, linear narrative, which is what I’d mainly done before, into this multi-narrative, multi-arc form and that really stayed with me. That structure informed the entire series of Downton in its earliest concept but it does mean that you’ve got to have directors on board who are interested and understand narratives, get the gags and follow them through. Simon is very good at that.

When you are writing, how conscious are you of the balance of drama and humour?

The sort of comedy that I like is real-life comedy and in our day to day lives we all know people who are funnier than others. Those people have the gift of coming up with phrases that are funny but they don’t remove you from what’s going on around you so in that sense you can return to the truth of the narrative situation without any difficulty. That is the level of comedy that sits well in an ongoing family saga like Downton and of course, for that, you need certain members of the cast to be talented with comedy lines. I was lucky with Maggie Smith, because I’d worked with her a few times before and the character I wrote that she played in Gosford Park was quite similar to Violet Grantham in Downton. Maggie has many gifts and one of them is that she can be very funny one minute, and two minutes later have you crying and she can shift gear without changing into someone else. She remains very true to the character.

What are the main differences in writing a series for television and movies?

The main differences between the two is that when you are writing a series for television, after the first series, you are writing for performances that already exist. You are writing to fit the actors. For example, Lesley Nicol is a very funny actress but back in the beginning of all this I didn’t really know her. I’d seen her in East is East which she was very good in but the more I realised how funny she was, the more I wrote for the fact she was funny. You also learn which actors are very good at emotional scenes and I quite deliberately give them material that I know they will shine in because it gives you a lot of high points. I’m part of a dying breed who believes that one of the jobs of the entertainment industry is to entertain. I want people to watch Downton and enjoy it.  I want them to go to this movie, have a nice time – laugh and cry, then go out and have a decent dinner and get back home and feel they’ve had a really good evening. That’s my goal and if people ask is it enough to just entertain, then the answer is yes. I also hope that every now and then we can make them think about the disparity of backgrounds in an equal society, or make them think of the difficulties of being homosexual in a period when it was still illegal. We touch on those sorts of subjects but that’s not the prime purpose of the film. The purpose of the film is to give the audience a really good evening out.