Do You Associate Greed with Money? 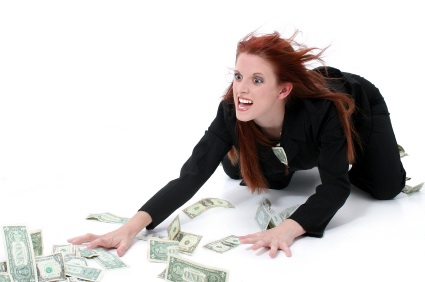 Greedy people exist, and some of us associate money with greed.  This is a money belief, and can influence our behavior toward money.  We may not want to talk about it, because we may appear greedy. We may think that if we want or need more money, we will be perceived as greedy.  So, we just don’t talk about it – even when we’re in trouble.  But if we never talk about it, we never learn.  Associating money directly with greed gets in our way of managing our cash well.

What if Money is the Only Thing You Can Trust?

Fewer greedy people exist than I used to think. Some people constantly need more money and may not share with others – because they experienced a life-threatening breach of trust as a child.  Somehow, they learned they could only rely on themselves.  They develop a Survivor mentality and associate money with extreme independence from everyone and everything that could let them down, or break their heart.  It can be a very lonely and fearful place to be.

Peter is an executive of a major corporation. He has 3 homes, undisclosed to most people, each with a safe holding a sizable amount of cash.  The homes are 100% owned with no mortgage. And yet, he still works long hours climbing the corporate ladder, for more.  Peter finally took his son to a baseball game. Peter thought the popcorn and candy were ridiculously expensive, and he refused to be held hostage.  So, he allowed his son only 2 hot dogs.

The Need to Survive Overrides All Logic

In Peter’s childhood, he learned mistrust. His father left him, his mother often didn’t show up. Peter lived in poverty, rarely getting 3 meals a day, and wearing used, outdated clothing to school.  Peter learned to survive, and take care of himself.  He vowed he would never let this happen when he grew up.  Is Peter greedy? Or is Peter so badly afraid of losing everything that he continues to accumulate – just in case the world is pulled out from under him.

Money beliefs come from the emotional Heart, not the logical Head.  They are not rational. And because we don’t openly talk about money beliefs, we don’t know how differently we think from other people. Peter’s fear from his challenging childhood is so imprinted that he doesn’t even see how he is depriving his own son, even though Peter has wealth compared to the poverty of his own mother.

Peter is a saver – to an extreme. To his friends, he looks ambitious and greedy – a tight wad. And yet, with all of his money he does not experience life’s simplest joys. Greed isn’t always greed. Money is sometimes just a visual symptom of so much more. Don’t let the perception of greed get in your way of learning, talking about, and getting on top of your cash.