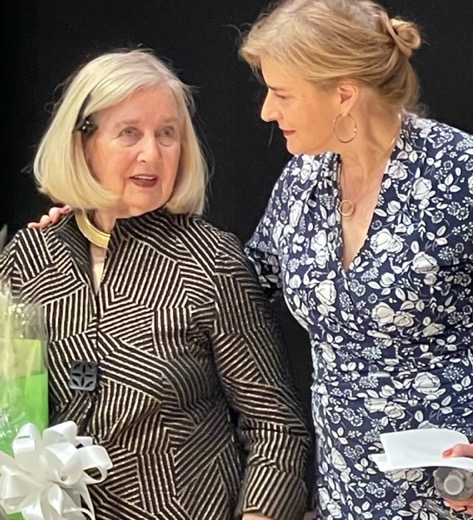 It was one surprise after another amid the applause, laughs and down to earth fun provided by what a conversation with Patricia Flicker Addiss actually means! On Monday, October 17th the LPTW honored Pat Addiss at the New York Public Library for the Performing Arts, produced by the League’s Co-President Ludovica Villar-Hauser.

And . . . it was one reveal after another as 3-time Emmy winner Roma Torre (along with numerous other broadcasting awards) asked the questions of the Tony Award winning producer whose life has taken numerous turns since her childhood days when she was recruited by John Robert Powers to model at age 3.  I know Pat a long time and never knew she appeared on and off Broadway as a child actor, nor about being an avid street kid who jumped rope, roller skated and grew up bike riding in Central Park. During the WPA era, she was chosen to appear in Prologue to Glory and was the youngest person allowed in the Stage Door Canteen where she baked a weekly “Cinderella” cake and served it to the servicemen! She especially loved doing radio!

After attending Finch College, graduating with honors in Costume Design and Merchandising, she started up Pat Addiss Enterprises, a promotion company imprinting corporate names and logos for her many notable clients. But what she loved most was being a Mom (having had 3 children). So it came as a big surprise when her then husband said he didn’t want to be married nor did he like having children. What does one do? Well, I’m sure it wasn’t easy, but Pat rose to the occasion as the bread winner, built her business, traveling worldwide finding items of interest, supporting herself and her 3 kids and eventually handing the company over (30 years later) to her attorney daughter Wendy Addiss who still runs it,

Then it was time for new horizons with new dreams to fulfill which she accomplished with aplomb taking the CTI course and turning to the business of theater as a producer. Not an easy task as she explains (see video) – “you need a lot of money or a rich husband or boyfriend.”

She’s produced more than 20 plays on and off Broadway, many being nominated for or winning Tony Awards, Drama Desk and Outer Critics Circle Awards (Little Women with Sutton Foster, Chita Rivera: The Dancer’s Life, Bridge and Tunnel, Spring Awakening (off and on Broadway), 39 Steps, Vanya Sonia Masha and Spike, Eclipsed, Buyer and Cellar and her most recent favorite (as she calls it – perfect musical) Desperate Measures (touring throughout the country in 2023).

Pat is a natural on stage with an honesty she presents in her droll, dry delivery known to some as “spontaneous combustion.” Keeping this in mind, the conversation erupted in laughs-a-plenty.

She’s honest in her interpretation about critics and social media making or breaking a show which is why she stresses the importance of having a really good Press Rep who understands how to target the specific audience your show needs.  She prefers to back shows she loves and has admittedly paid the price of love over money.

All in all, this event turned out to be a lovefest for all who attended. Congratulations Pat Addiss – you deserve this and lots more!!

More information about The League at www.theatrewomen.org