Broadway By the Year at The Town Hall 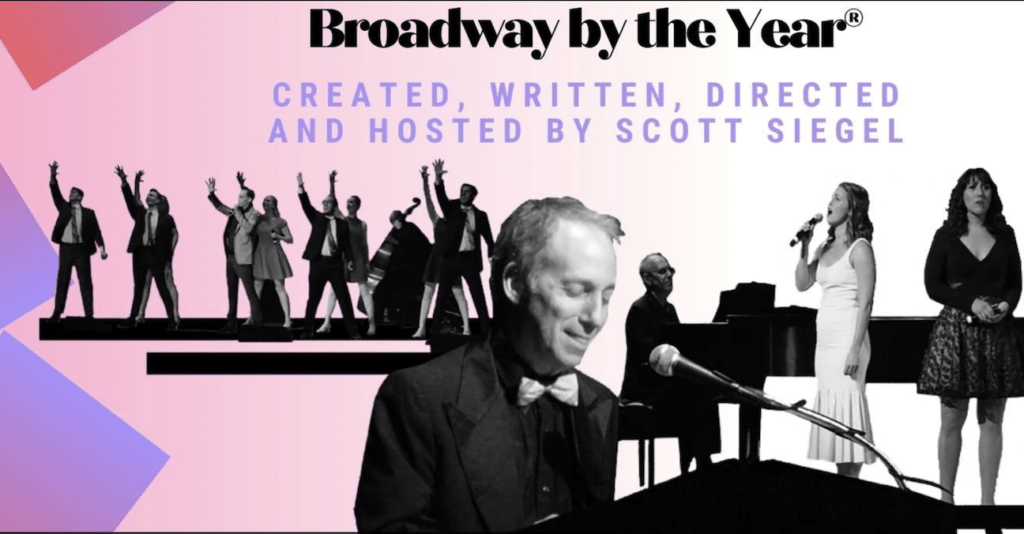 The Town Hall has announced new dates for Broadway By The Year, created, written, hosted and directed by Scott Siegel, due to the current Omicron surge. Instead of beginning in February, this year’s series will begin in March, with the last concert being performed in September.

This year, The Town Hall will set a new, exciting standard for its signature series, with each concert highlighting a major musical theater theme. They are: The New Wave that will feature the breakthrough new composers of the last twenty-five years; From The Ziegfeld Follies to Moulin Rouge, which will explore the remarkable history of jukebox musicals and the great age of musical revues; Almost on Broadway that, for the first time in Broadway by the Year history, tackles the great musical theater songbook that never reached the Great White Way; and, finally, the biggest, most ambitious concert in Broadway by the Year’s history, A One Night Only History of Broadway Song and Dance.

“We have an extraordinarily ambitious Broadway by the Year season planned, and we don’t want the virus to imperil our ability to bring it to you,” said Scott Siegel and The Town Hall’s Artistic Director Melay Araya in a joint statement. “We know our audiences won’t want to miss any of the excitement and pushing back the concerts by a month will keep everyone safer.”

Broadway by the Year© concerts open time capsules to some of the Great White Way’s most memorable seasons, and will continue to break new ground in its 21st season.

Broadway by the Year: THE NEW WAVE

Songs from Hamilton, Dear Evan Hansen, The Book of Mormon, Rent, The Drowsy Chaperone and more

When Broadway historians look back at the early 21st Century, they may well call this era a new Golden Age, because right now it’s much like the 1920s when bright new composers like Irving Berlin, The Gershwins, Rodgers & Hart, and Cole Porter took a foothold on Broadway.

In the first concert of their 21st season, Broadway by the Year will celebrate the likes of Lin-Manuel Miranda (In the Heights, Hamilton), Benj Pasek and Justin Paul (Dear Evan Hansen), Bobby Lopez (The Book of Mormon), and Lopez with Jeff Marx (Avenue Q), and so much more. An All-Star cast, drawn from performers who starred in these shows on Broadway, will be an extra, exciting attraction

Broadway by the Year: FROM THE ZIEGFELD FOLLIES TO MOULIN ROUGE

Songs from Jukebox and Revue Musicals

An extraordinary number of hit Broadway shows fit the description of “Jukebox or Revues Musical.” In our unique concert event at Town Hall, we will unearth the history of this much-maligned genre to reveal its importance in the resurrection of composers, songs, and styles. These Musicals have served everything from rock ’n’ roll (The Jersey Boys, Beautiful, All Shook Up) to classical music (Kismet), and from country (Ring of Fire) to Rhythm & Blues (Black & Blue, After Midnight). It has highlighted oftentimes forgotten composers, bringing their names back into the limelight, such as Eubie Blake with Eubie! and Fats Waller with Ain’t Misbehavin’. Our concert will highlight the history of these shows and give you the chart-topping songs from these shows, as well! Look forward to another All-Star cast delivering these songs with all the flair they deserve!

Broadway by the Year: ALMOST ON BROADWAY

Songs from shows that played off-Broadway and around the country

The world of theater music is full of songs that leapt to fame from shows that never actually made it to Broadway. For the first time in its 21-year history, Broadway by the Year will venture outside the confines of Broadway to honor the brilliant songs born Off-Broadway and in shows that played everywhere but Broadway. Just a small sampling of Off-Broadway shows that launched famous songs includes Jacques Brel is Alive and Well and Living in Paris, Bat Boy, Beehive and, of course, The Fantasticks. Then there are the shows that never made it to Broadway, like The Baker’s Wife, Zorro, and The Witches of Eastwick.

Broadway by the Year: A ONE NIGHT ONLY HISTORY OF BROADWAY SONG AND DANCE

It’s an awesomely big subject, but Broadway by the Year will bring it to you in an explosion of tap, ballroom, jazz, ballet, and more! From George M. Cohan, Fred &Adele Astaire, and the dancing feet of 42nd Street, right up to the brilliance of Andy Blankenbeuler’s choreography for In the Heights and Hamilton — and the world of Broadway dance that swirls in-between.

A cast of brilliant Broadway singer-dancers will be on display in this, Broadway by the Year’s most ambitious concert event in its 21 year history! In fact, this entire 21st season will set a new standard for Town Hall’s signature series. We hope you’ll be there to witness it all!