Our Broadway Babe, Randie Levine Miller has curated some terrific showbiz entertained from YouTube. Go the scenes of the Sunset Boulevard with Andrew Lloyd Webber in the version that starred Diahann Carol.  And you’ll love this 1974 TV special with Shirley MacLaine and Carol Burnett – “If They Could See Me Now.” Plus Forbidden Broadway and Eartha Kitt!

Attention theater aficionados! Highlights from Gerard Alessandrini’s “Forbidden Broadway” which he originally created, wrote and directed in 1982, and continues to write! And musical director, Fred Barton has been performing the show, since it’s beginnings. This video stars the irrepressible and uber-talented Christine Pedi, who performed in “Forbidden Broadway” probably longer than any other performer.  You see her performing as an aging “Annie”,spoofing “Tomorrow”. You also see parodies of “Chicago”, “Phantom”, “Les Miz” “Lion King”and “Cats”. If you’ve been a fan of “Forbidden Broadway”, these clips will delight you, and make you smile! 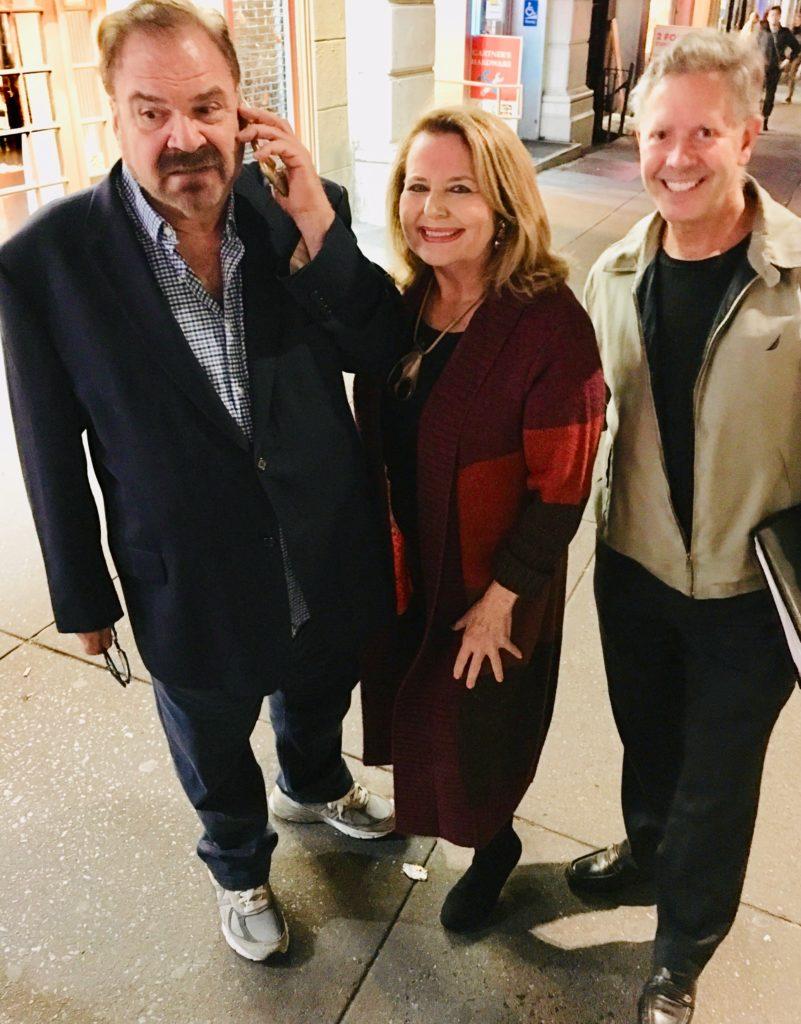 With creator, writer and Director Gerard Alessandrini and Musical Director Fred Barton, after seeing the latest edition of “Forbidden Broadway” at the Triad Theater, 2019

Sidebar: My friend, Ken Fallin, theater go-to caricaturist, has been creating the brilliant and eye-catching caricatures of “Forbidden Broadway” since 1983. He’s also a regular at my Randie’s Roundtable, where theatrical folks get together at Sardi’s and share memories and anecdotes about their lives in the theater.

Behind the Scenes of Sunset Boulevard with Andrew Lloyd Weber

Sidebar: A fact I didn’t know, but a young Hugh Jackman, co-starred in the Australian production…. the first singing role he did.  There are some excerpts on Youtube.

A truly marvelous find… “Shirley MacLaine: If They Could See Me Now!”, with special guest, Carol Burnett, aired on CBS-TV in 1974.  Both of these greats started in the theater. A very theatrical show with special material written by Broadway‘s Cy Coleman and Bob Wells, this TV special was choreographed by Broadway great, Graciela Daniele.  Shirley MacLaine looks absolutely gorgeous, singing and dancing and was really in her prime here (48 years ago, would you believe?). Watching Shirley and Carol Burnett performing together is a true treat. This is a rare video that I believe tomatoes will really enjoy!

From 1978, a 90 minute performance of “Eartha Kitt at the Westport Country Playhouse”. She performed this concert, during her Broadway run starring in “Timbuktu”.  She opens with her own special lyric to Stephen Sondheim‘s “I’m Still Here.” And performs many of the songs she made famous. She definitely had her own style.

Sidebar: When asked if he ever wrote or heard alternate lyrics to this song, that would allow a man to sing it, Sondheim got testy and said: “No and if you try to write them, I will sue you just like I did Eartha Kitt!”  When you see this, I suspect you will agree that Sondheim would not have liked this clip… But it is fun!

Sidebar, too: My friend, legendary Broadway press agent, Josh Ellis handled the publicity for “Timbuktu”, the musical that starred Eartha Kitt and Melba Moore, in 1978… He had scheduled a press stunt with Melba Moore and Eartha Kitt, with each star riding down Broadway atop a camel. When Melba Moore didn’t show up, Eartha insisted that Josh ride on the other camel!… Miss Kitt could be difficult. Another time, during the run, he scheduled her to do a live radio interview and when she canceled two hours before showtime, Josh, being the creative pro, decided that he will do the interview as Eartha Kitt… And that’s exactly what he did! And he did it brilliantly, as nobody questioned the fact that he wasn’t Eartha Kitt!… He does some of the best impressions of folks in the theater including Carol Channing and David Merrick, amongst many others, in his one man show, “Call My Publicist”!