Our Broadway Babe, Randie Levine Miller has some great free entertainment you can watch right now, or at your leisure. You’re going to love, love, love Broadway: The Golden Age, and the best musicals of the 1950s; plus a terrific tribute to song writers Kander and Ebb whose songs are performed by Liza Minnelli, Chita Rivera, Dinah Shore. But the best is a Friar’s show Randie produced when Debbie Reynolds was inducted.

Broadway: The Golden Age, by the Legends Who Were There

If you love Broadway, then don’t miss what I feel is the best documentary ever made about and including Broadway’s greats. “Broadway:The Golden Age, by the Legends Who Were There” (2004). Late pal, Rick McKay, writer and director, put so much creativity, time, and love into his documentary which is a love letter to Broadway. It’s like a theater time capsule. Everyone who was anybody is in this extraordinary film, and Rick seemed to have a knack for interviewing his subjects shortly before they died. Your emotions will be stirred watching this, which includes lots of musical moments. So sad that Rick is also no longer with us. As the song “He Touched Me” goes, “Yes he touched me and nothing is the same!” Hope you will be touched as much as I was.

Sidebar: During the credits at the end of the film, various stars sing accapella. Robert Goulet, the orignal Sir Lancelot in “Camelot” ad libs, “If ever I would leave you…… it wouldn’t be at Sardi’s!!!”

I just stumbled upon an incredible and hilarious event that I didn’t know was out there on Youtube…A Celebrity luncheon I produced in 2009 iho Debbie Reynolds with Dean Freddie Roman presenting Debbie with an honorary Friars membership. It was a totally packed house and Debbie was unfiltered,and delightfully politically incorrect, doing schtick herself (like the old Friars guys of yesteryear). When the interviewer, Ellis Nassour, said to Debbie, “you probably don’t need me”, she reponded that he was absolutely correct. Delicious Debbie was a show in herself, and totally candid. I think Tomatoes will love this entre nous event!

Sidbar: these celebrity luncheons that I produced for many years at the club, were private, so finding this video (coincidentally uploaded by good pal and videographer for Tomatoes events including Tomatoes Got Talent), Michael Stever.

Most Tomatoes remember Dinah Shore. Her talk show was also a variety show with performances from some of the greats of yesteryear, as well as, conversation and performances with stars, before they were stars… This episode from1975 is a real gem as it features Liza Minnelli and Chita Rivera, as well as Dinah, paying tribute to songwriters John Kander and Fred Ebb. It’s always delightful when songwriters perform their songs around the piano along with their stars. This is a nostalgic rarity.

The Golden Era of the Musical

Hollywood Singing and Dancing — Golden Era of the Musical:The 1950s was a series of documentaries, hosted by Shirley Jones, with interviews and commentary, as well as some delicious clips from film musicals of that era. Providing opinions and commentary are Debbie Reynolds, Marge Champion, Robert Osborne, Rob Marshall, and Liza Minnelli (whose father, Vincente Minnelli was a major musical film director). It’s a delightful trip down memory lane. They don’t make ’em like that anymore! Tomatoes of a certain age will definitely enjoy this find. 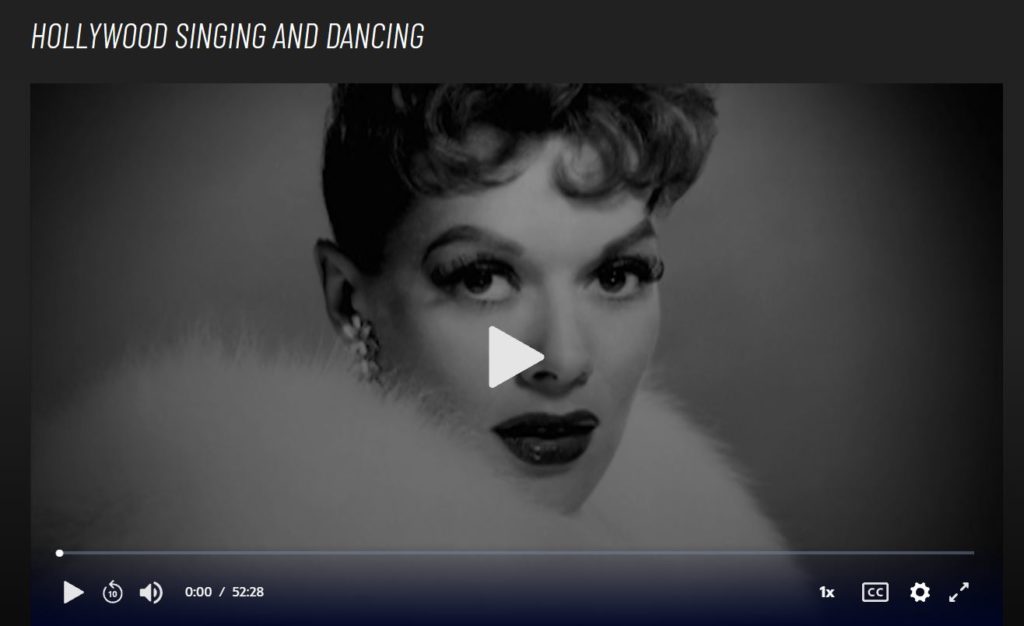