I love seeing people trip and fall. OK, wait….I’m not delighting in someone’s misfortune. What always gets me is what was going on just BEFORE the fall. Let me explain with an example:

The other day my sisters and I were out for a walk. We are walking and talking and a man comes towards us, dressed as if he is out for a run. I see him eyeing us and he pulls himself up a little straighter, pulling in and puffing out, and just as he is about next to us, with a sly grin on his face (could almost hear the “how you doin’?”…except we were in Michigan and that would have been very odd), his foot catches and he starts to trip. Luckily, he caught himself and didn’t fall. And it took everything I had not to burst out laughing.

What is the most funny to me is that when someone is trying to be something that they are not – trying to appear younger, thinner, stronger, smarter, whatever – and then this happens. It is almost like the Universe saying “Oh really? That’s what you think?” and then sticking out it’s proverbial foot to trip over. Had the man in my scenario just continued on his way and not tried to be someone other who than he was, I don’t think he’d have tripped. So, the joke in it for me is the reminder that as much as we try to be something other than what or who we are, we invariably are reminded of the reality of a situation and are (sometimes literally) brought back down to earth.

I saw a clip of a news conference with Emma Thompson talking about her final scene in the movie “Good Luck to you, Leo Grande,” where she stands completely naked in front of a mirror and just looks at herself. She was saying it was the hardest acting she has ever had to do. I would have thought so – just completely exposing yourself to millions of people – but she went on to say it was so difficult because it is so very hard to just stand and look at yourself, completely, and accept what you see. She said the natural tendency is to turn to look better, or suck it up, or hide something, and nearly always judge, judge, judge. To stand in non-judgement and even acceptance is a very difficult thing. I can so relate.

And speaking of acceptance, I had the ultimate test in this when I went “back home”. You think you have done all this work on yourself, that you’ve addressed all those childhood issues, and then you walk through the door and suddenly you are not your enlightened adult self, but the kid you were when you all lived together. My daughter brought new eyes to my journey, when she observed and pointed out to me my patterns of self-belittling. What, me? But, sure enough, I saw that this is a generational issue and the self-inflicted body shaming the Emma Thompson had been talking about has been definitely passed down in my family as well. It was an awareness I was grateful to receive and hopefully able to change.

I don’t think I’m quite ready for the “naked in the mirror” acceptance yet, but I’m at least not trying to make myself into something I’m not. And hopefully I don’t trip along the way. But if I do, feel free to have a laugh on me! 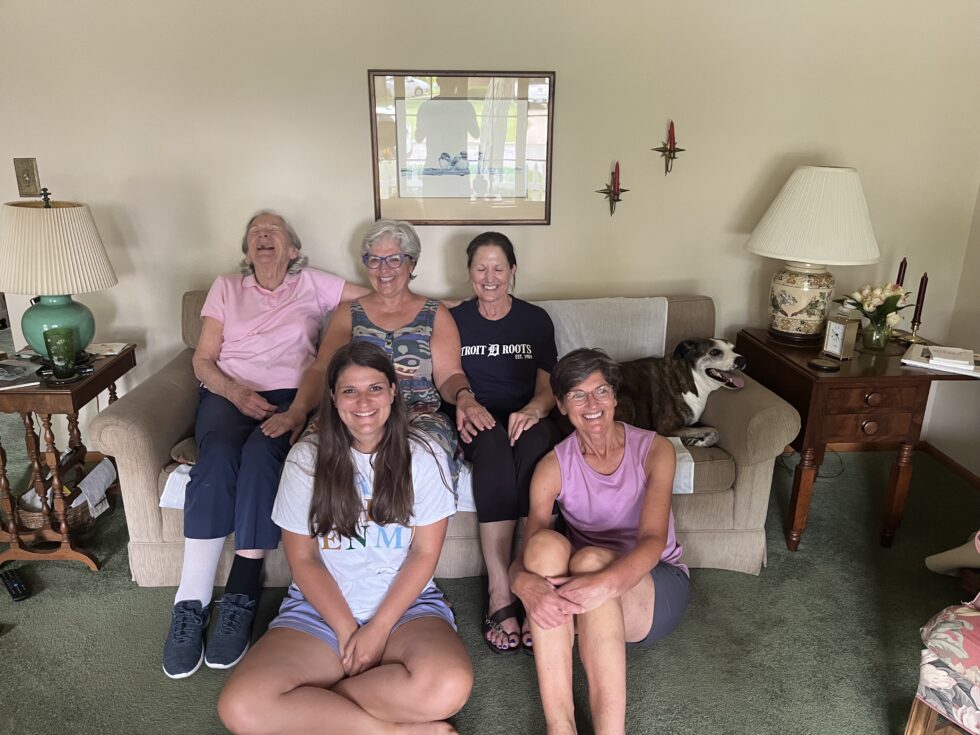 My sister had just said to me that I was too close to her and was touching her. So, I decided to really show the love and touch her. Yes, I am the oldest.